IN September 2009, the then newly-minted 1 Malaysia Development Bhd (1MDB) caused a stir in banking circles when it agreed to pay 5.75% annual interest on a RM5.0 billion 30-year Islamic bond that was guaranteed by the federal government.

Tongues wagged as to why the interest rate was so high when government bonds typically had to pay less than 4.0% and national oil company Petronas was paying around 3.6% at the time.

Bankers speculated that “middlemen” had profited from the spread of around 1.75% as institutional investors would have been happy to have been offered the government-guaranteed bonds, specifically called Medium Term Notes (MTNS), at 4.0%.

Checks done by Edge Research showed that 1MDB had also paid way above industry standard on two subsequent bond issues it made in 2012 and 2013. However, on these two occasions, it was not the coupon or interest rate that was particularly high, but the fees and other payments paid to the investment bank, Goldman Sachs International.

The two debt issues were:

Investment bankers say the costs of 9.44% and 11.25% that 1MDB paid Goldman Sachs were way above industry norm. A random check by The Edge Research showed that the costs of several bond issues ranged from 0.02 % to 2.0 % of total proceeds (see Table 1).

Interestingly, Goldman Sachs was also the lead arranger in some of these debt issues, including a US$800 million (RM2.56 billion) notes in July 2011 by Equisar International Incorporated, a company owned by the Sarawak state government. The notes pay an interest rate of 6.628%, but Equisar paid Goldman Sachs only US$10.0 million (RM32 million) or a mere 1.25% of the total amount it received.

While the Equisar offer document said the payment was for “expenses”, in both the case of 1MDB Energy and 1MDB Global Investments, a total sum of US$480 million (RM1.54 billion) was deducted for “certain commissions, fees and expenses”.

The intriguing part, bankers say, is what the “certain commissions” were that had to be paid, or more specifically, who they were paid to.

Typically, in any public offer, whether equities or debt, the issuer pays fees to investment bankers, lawyers and accountants and also bears the expenses for the printing and distribution of the offer documents and advertisements to promote the offering. Having to pay commissions is not something that is usual.

Goldman Sachs did not respond to questions posed by The Edge on why the cost of raising the money by 1MDB Energy and 1MDB Global Investments was so high and what the “certain commissions” cited in the offer documents were.

A Goldman Sachs spokesman based in Hong Kong said the US investment bank had no comment to make.

A source familiar with the deal said the fundraising exercise cost more than usual because 1MDB wanted the money to be raised very quickly. Even if that were the case, other bankers say it was still way too high (see 1MDB’s response on the right).

The high cost of its fund-raising exercise serves to compound 1MDB’s ballooning debt situation. As at FY2013, 1MDB had total borrowings of RM36 billion, of which 55% (RM21 billion or US$6.5 billion) was raised through Goldman Sachs.

The amount of debt is expected to be larger for FY2014 as 1MDB has since taken on more borrowings.

Prime Minister Datuk Seri  Najib Tun Razak, who is the adviser to 1MDB and has the sole discretion to appoint the board of directors of 1MDB, told Parliament two weeks ago that they will be submitting the March 31, 2014, accounts by the end of October, and many are waiting to see what the financials will be like.

1MDB, which describes itself as a strategic development company, was late in submitting its FY2013 accounts and only got them ready in April 2014 after a change in external auditors. It reported a profit because it revalued to market price a large tract of land it had bought cheap from the government.

The tight cash flow 1MDB faces was illustrated by the fact that it recently had to reschedule what was initially a RM6.17 billion 18-month bridging loan provided by a consortium of lenders, led by Malayan Banking Bhd, into a 10-year RM5.5 billion loan that is said to carry an interest rate of 200 basis points above the lender’s cost of funds.

Despite having raised more than RM40 billion by early 2014, 1MDB’s ferocious appetite to borrow has not stopped.

It is raising another RM8.40 billion to finance Project 3B to build a 2,000mw coal-fired power plant in Melaka set for completion in 2018.

1MDB, through its 70%-owned subsidiary Jimah East Power Sdn Bhd (its partner is Mitsui & Co, which holds 30%), has appointed Am-

Investment Bank Bhd as lead arranger to raise the money through 23-year sukuk bonds. According to the offer document sighted by The Edge, despite the fact that construction will take place over four years, Jimah East will be drawing down all the money within a month from Oct 28, 2014.

Of the nominal sum of RM8.40 billion raised, RM8.13 billion will be used to finance Project 3B. This implies that the cost of the issuance could be around RM270 million or 3.2% — still slightly on the high side, but way below the 9.44% and 11.25% of total proceeds paid for the Goldman Sachs-arranged bonds in 2012.

This raises the question: Why did 1MDB agree to pay such hefty fees and expenses and who were paid “commissions”? 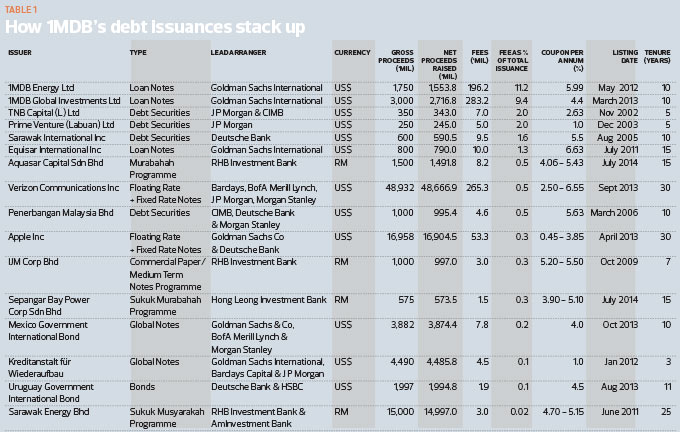