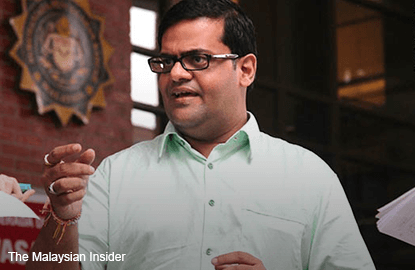 (Oct 2): The Court of Appeal today restored a RM2 million suit brought by the widow of a key witness in the murder trial of Altantuya Shaariibuu for losses suffered during the family's five-year exile in India.

A three-man bench chaired by Vernon Ong Lam Kiat allowed the appeal by A. Santamil Selvi after the respondent, carpet dealer Deepak Jaikishan, did not contest the matter.

Deepak, who represented himself, told the bench that he wished to concede his stand on this case.

"I agree to the claims by the plaintiffs (Santhamil and children), I am not contesting the appeal," he told the judges.

Ong: Are you aware of the consequences?

Deepak: I have made statements in the media before. I can't deny those statements, otherwise I will be in contempt of court.

The court did not order costs to Santamil, and ordered the matter to be remitted to the High Court.

Case management has been fixed on October 23.

Lawyer Americk Sidhu, who represented Santamil, told The Malaysian Insider that the High Court would have to hold trial.

“The High Court will hear Santamil’s suit against Deepak only,” the lawyer said.

Balasubramaniam died of a heart attack on March 15, 2013, weeks after he and his family returned from India.

Hasnah said Santamil lacked the capacity to file for action on behalf of her husband’s estate.

The Court of Appeal in April upheld the striking out by the High Court on the grounds that Santamil’s notice of appeal was defective.

However, Deepak was not a respondent in Santamil’s appeal in the Court of Appeal.

On May 6, Deepak sacked his lawyer Gabriel Daniel and the firm M/s Paul Ong and Associates from appearing for him in the suit.

Deepak had said that he would file a motion to adduce further evidence that he was not a voluntary party to strike out Santamil’s suit in the High Court.

In the suit, the family said the defendants, including Deepak, had caused Balasubramaniam’s second statutory declaration to be drafted without instructions from him and further caused him to sign it “under threat and inducement”.

Balasubramaniam and his family left Malaysia after he signed the second statutory declaration in 2008 to denounce the first one he made, which had implicated Najib in the murder of Altantuya.

The second statement purported to clear the prime minister of involvement in the case.

Balasubramaniam came into the limelight after political analyst and Najib’s associate, Abdul Razak Baginda, hired him to monitor Altantuya, and when he made his first sworn statement on the matter on July 1, 2008.

Sirul, who fled the country before sentencing, is in Australia and is being held in an immigration detention centre following a red notice issued by Interpol for his arrest. – The Malaysian Insider