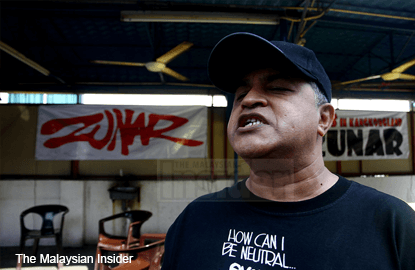 (Nov 11): The Home Ministry has been ordered to return books seized from political cartoonist Zunar by the Federal Court today, Malaysiakini reported.

The ministry is to return 33 copies of the books to Zunar, whose full name is Zulkiflee Anwar Haque, the apex court ordered today.

The books were seized in 2010 after the home ministry's ban on May 10 that year under Section 7 of the Printing Presses and Publications Act, for threatening public order.

The publishers had mounted a challenge to overturn the ban in July 2010 and lost at the High Court. The Court of Appeal later overturned the decision.

Zunar's books have riled the authorities for their depictions of alleged political scandal involving government figures and lampooning of those in power.

The satirist himself faces multiple charges of sedition that could see him in jail for 43 years if convicted, over his tweets criticising the judiciary in the Federal Court's verdict to uphold the sodomy conviction of former opposition leader Datuk Seri Anwar Ibrahim. – The Malaysian Insider