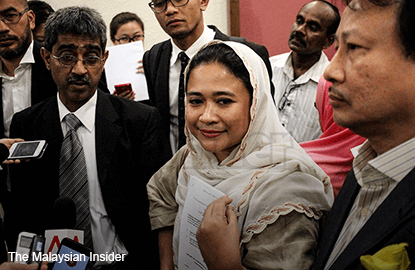 (Oct 9): The High Court will hear on Nov 30, Umno secretary-general Datuk Seri Tengku Adnan Tengku Mansor's application to strike out Anina Saaduddin's suit over her sacking from the party.

Haniff said the dates were fixed after a case management in chambers today.

She is seeking an order that two termination letters issued by Adnan were invalid and had no effect on her membership.

Adnan on Oct 5 filed an application to strike out the suit on grounds that a party member was barred under the party rules and Societies Act to bring grievances to the court.

Anina was sacked from Umno after filing a suit on Aug 28 against Umno president Datuk Seri Najib Razak, to make him account for the RM2.6 billion in his personal bank accounts.

She had also lodged a complaint with the Umno disciplinary board to summon Najib to explain the controversy over the RM2.6 billion. – The Malaysian Insider