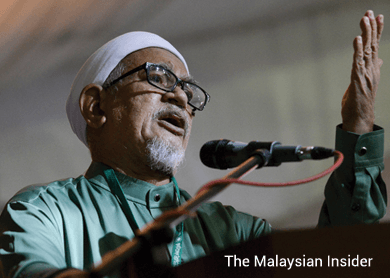 (Oct 5): The High Court has dismissed PAS president Datuk Seri Abdul Hadi Awang's preliminary objection, in his bid to strike out a suit to stop him from tabling a private member’s bill on hudud in Parliament.

"The court now wants to hear our application to strike out the suit and the plaintiffs' injunction application before she made a ruling," he told reporters of the decision made in chambers.

Hadi had raised the preliminary objection as the plaintiffs had used the wrong mode to start the cause of action.

The plaintiffs had filed an originating summons but Hadi's lawyers submitted it should be by way of judicial review.

Asmabi will hear both applications on October 13.

Mansoor Saat, Azira Aziz, Hasbeemaputra Abu Bakar and Hazwany Jamaluddin, who filed the application on June 8, are seeking a declaration that Hadi’s attempt to introduce a private member's bill in the Dewan Rakyat is against the Federal Constitution.

The plaintiffs said the application was based on the unconstitutionality of the bill, in which Hadi is seeking to amend the Shariah Courts (Criminal Jurisdiction) Act 1965 to widen the scope of punishments meted out by the Shariah court.

They said a private member’s bill was a “back-door” attempt to change the constitution, warning that the proposed bill would have wider implications than just Kelantan, as it would apply to Muslims nationwide.

“This is technically amending our constitution. It is just not about Kelantan. If the bill is passed, it will allow Muslims in Malaysia to be punished according to their interpretation of the Shariah law,” they said.

The four applicants are also contending that Hadi’s attempt to introduce the bill is in breach of Pakatan Rakyat’s common policy framework as outlined in the 2010 “Buku Jingga”, of which the PAS leader is a party.

The plaintiffs also want an injunction to stop Hadi from submitting the bill and Dewan Rakyat from acting on it pending the outcome of their suit.

The PAS-led Kelantan government in March passed amendments to the Shariah Criminal Code II Enactment 1993 (Amendment 2015) to pave the way for the east coast state to implement the Islamic law which now has, among others, provisions, such as death by stoning for adultery with married partners, whipping of between 40 and 80 lashes for consumption of alcohol, and amputation of limbs for theft.

However, an amendment to the federal law is necessary for hudud to be implemented in Kelantan.

Hadi had presented a notice to table the motion on the private member’s bill during the first sitting of the year on March 18.

Although it was listed in the order paper, it never came up for debate.

Hadi resubmitted the bill just before the beginning of the second meeting of the year which began in May.

Again, although listed in the order paper, the bill was not debated until the Dewan Rakyat adjourned on June 18.

Today, Takiyuddin, the PAS secretary-general and Kota Baru MP, told reporters he was unaware if Hadi had filed a fresh private member's bill.

The Dewan Rakyat will sit again on October 19. – The Malaysian Insider