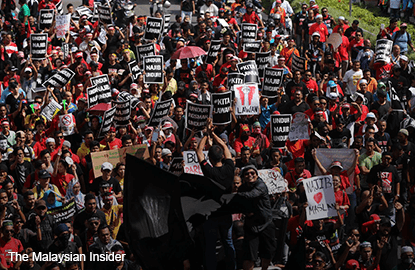 (Oct 1): The Court of Appeal today ruled that a provision in the Peaceful Assembly Act 2012 (PAA) that punishes organisers for holding assemblies is constitutional.

A three-man bench chaired by Tan Sri Md Raus Sharif said Section 9(5) of the PAA, which provides for a fine of up to RM10,000, did not run foul of Article 10 of the Federal Constitution.

"Section 9(5) is valid and enforceable," Raus said of the unanimous judgment.

He said as such the bench had to depart from a previous Court of Appeal ruling that Section 9(5) was unconstitutional.

Raus said this in allowing the appeal of the government against the acquittal of Johor PKR executive secretary R. Yuneswaran on a charge of unlawfully organising a “Blackout 505” rally in 2013.

Yuneswaran, 28, was fined RM6,000 by the Sessions Court in Johor Baru on September 26, 2013, which found him, as the organiser of the rally, guilty on the charge of failing to give prior notice of at least 10 days to the southern Johor Baru district police chief, on the event.

He was alleged to have committed the offence at the PKR office in Jalan Beladau 19, Taman Puteri Wangsa, Ulu Tiram in Johor Baru at 8.30pm on May 15, 2013.

On August 24, 2014, however, he was acquitted by the Johor Baru High Court, which ruled that it was bound by a Court of Appeal decision that declared Section 9 (5) of the PAA, unconstitutional.

On April 25, 2014, a three-man Court of Appeal bench, which acquitted PKR's Nik Nazmi Nik Ahmad of organising a rally, ruled that Section 9(5) of the PAA, which criminalises anyone for organising a peaceful rally without giving 10 days notice to the authorities, is unconstitutional.

In an immediate response, lawyer Sivarasa Rasiah, who represented Yuneswaran together with Datuk Seri Gopal Sri Ram, said today's ruling was a "bad day for human rights in Malaysia" as the right to assemble peacefully has been restricted.

He said the bench did not provide answers to many of the issues raised by them during submissions.

The Subang MP said the ruling meant that organisers would run foul of the law if they failed to give the mandatory 10-day notice to the police or hold spontaneous rallies.

Sivarasa said the public and the legal fraternity would be confused because there were two conflicting judgments from the same court.

“We alerted this bench that they cannot go against the 2014 case of Nik Nazmi Nik Ahmad versus Public Prosecutor on the same issue.

“We told the judges that only the Federal Court could overrule the Court of Appeal.”

Sivarasa said this could be done as the prosecution would have an opportunity to bring another case up to the apex court and debate on the constitutional issues.

Meanwhile, Yuneswaran paid the fine at the Court of Appeal registry.

Raus, who read out the joint judgment of the court, said the police were regulator and facilitator under PAA and they had to take into account conflicting interests before allowing peaceful gatherings.

"If not, this will be a recipe for public disorder," he said, adding that the 10-day notice requirement was also in line with European laws.

He said there must be restriction and punishment imposed on those who breach PAA because criminal sanction was also allowed against those who violated freedom of expression and association, all which came under Article 10.

Raus said Parliament alone must be allowed to determine what was reasonable restriction and not the courts or else there would be uncertainty in the law. – The Malaysian Insider