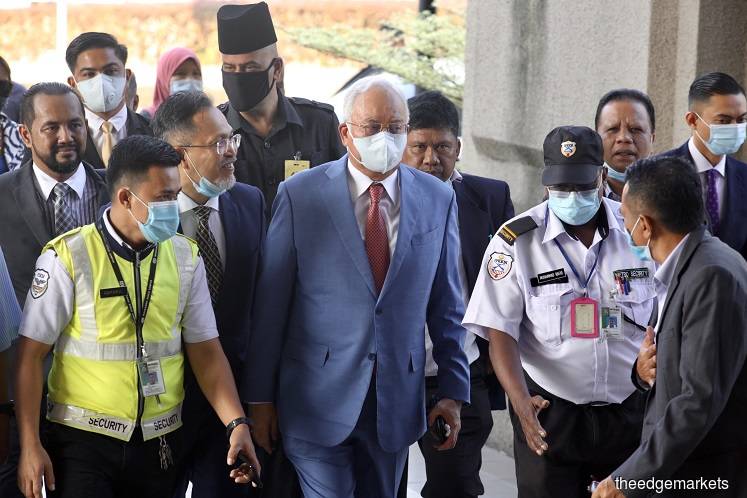 The decision was made by Justice Mohamed Zaini Mazlan after hearing submissions from all parties today.

In his ruling, he said that the court does not think that both the accused would be prejudiced with the amendments as only seven witnesses had been called and not all witnesses were subject to cross-examination.

He added that while the trial has run for about eight days, only seven witnesses have taken the stand so far and most of these witnesses have not been cross-examined.

"Even if these amendments result in the goalpost being shifted, it will still remain within the pitch. They will still be able to aim their shots. I am here to ensure that they will be given every ample opportunity to mount their defence," said Zaini.

"I am confident that the defence will have ample time and opportunity to prepare their case, based on the amendments to the charges. I will on my part try my utmost to ensure that they are not put to any disadvantage," he added.

During submissions, deputy public prosecutor (DPP) Ahmad Akram Gharib argued that charges can be amended by law and said that the only test is to see whether the proposed amendments would be prejudicial to the accused.

"There was some confusion, so we make it clearer. It was already clear before but now we are making it absolutely clear. The changes do not change the charge itself," he said.

The changes made to the charge sheets for Najib and Arul Kanda mainly revolve around a section concerning whether the audit report that was amended was a draft or a finalised version.

Previously, the charge sheets stated that Najib had given orders to amend 1MDB's audit report which was "prepared" by the auditor-general, before it was "finalised" and tabled to the Public Accounts Committee (PAC).

Following the amendments, the charge sheets now state that Najib had given orders to amend the audit report which was already "finalised" by the auditor-general, before the report was "finalised again" and tabled to the PAC.

Meanwhile, Najib's lawyer Tan Sri Muhammad Shafee Abdullah submitted that the amendments "bear strong evidence of mala fide" and would indeed be prejudicial to his client.

Shafee said the shift in the charges will prejudice the defence, as it was seeking to strike out the charge and is now left "in limbo".

He also pointed out that the then attorney-general (A-G) should have looked through the charge sheets to ensure everything was in order, adding that it would be terrible to suggest that the A-G did not know the charges.

The lawyer also brought up how the prosecution previously said it only wanted to amend a typographical error, and then later proposed amendments spanning a few phrases.

On the other hand, Datuk N Sivananthan, representing Arul Kanda, did not take any particular side of the argument, and said that the amendments do not detract anything from his client.

"Whether the report is a draft or finalised report, it doesn't matter. What matters is before the report was presented to the PAC, were there sections removed from the report for personal gratification and whether there was any pressure or force to do so," he said.

"I'm not here to support the prosecution or anybody else. The amendments do not prejudice my client," added Sivananthan.

Following the judge allowing the amendments, the charges were read to Najib and Arul. Both claimed trial.

Shafee indicated that the defence intends to strike out the charge, which will be heard in court on July 23.

Both of them were charged under Section 23(1) of the Malaysian Anti-Corruption Commission Act 2009, which provides a jail term of up to 20 years and a fine of no less than five times the amount of gratification or RM10,000, whichever is higher, upon conviction.