Cost of living not the problem, low income is — MIER 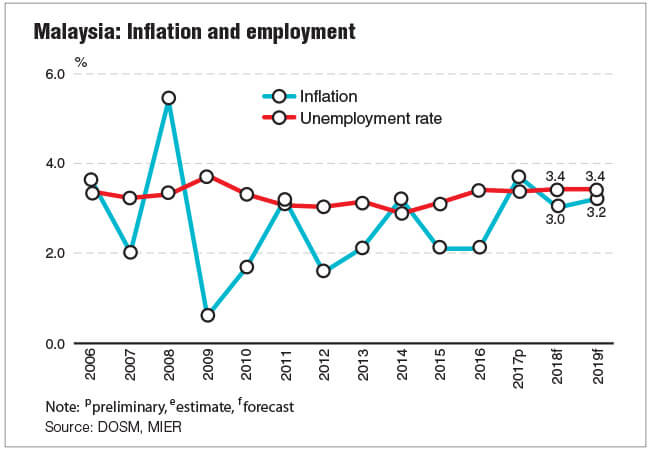 KUALA LUMPUR: The Malaysian Institute of Economic Research (MIER) does not believe the cost of living in the country is too high, rather it is the nominal income of Malaysians that is “too low”, its executive director Emeritus Professor Dr Zakariah Abdul Rashid said yesterday.

Speaking at the MIER’s 23rd Corporate Economic Briefing here yesterday, Zakariah explained that the prices of goods and services in Malaysia are comparable with other countries around the world.

However, Malaysian household income is low.

And while the unemployment rate — which has always been below 4% — improved to 3.3% in February 2018, Zakariah noted that the labour market is not in a good shape.

“This aggregate number [of 3.3%], it hides a lot of unpleasant things in the labour market; low pay, low productivity, low skill, and the high number of foreign workers,” he added.

Zakariah stressed that the country’s production structure needs to be looked at and should be addressed. He added that the labour market is a key factor in overcoming this issue.

According to the Department of Statistics, Malaysia achieved labour productivity value of RM85,031 in the fourth quarter of 2017.

Bank Negara Malaysia, in its Annual Report 2017, also highlighted that the economy faces the challenge of modest productivity growth compared with its peers.

MIER also said that despite many sectors striving towards the Industry Revolution 4.0, the manufacturing, agricultural and production sectors are still lagging behind, being labour-intensive and dependent on low-skilled workers.

Zakariah added that first, the country needs to decide what products to produce and whether it wants to be capital-intensive or low-skilled, labour-intensive-producing nation.

“If we are low-skilled and labour-intensive, we will have to deal with competition from cheaper countries and this will create a domestic problem as employers are more inclined to pay lower wages,” said Zakariah.

He also noted that Singapore attracts nearly half of its foreign direct investment (FDI) from Asean and it is a high value-added country, saying that there is no correlation between cheap labour and the FDI in a country.

With the problem of low nominal income, Zakariah said that Malaysia needs to address the issue at its fundamental in order to come up with a long-term solution.

MIER senior research fellow Dr Zulkiply Omar said that to increase income, the increase in labour productivity is needed and the easiest way to do so is through investing in technology.

“As this is on the supply side, it is important to increase production before you can hire high-skilled workers and the best way to do so is to invest in new technology,” said Zulkiply.

Zakariah pointed out that the minimum wage policy represents a significantly lower proportion of the median wage, so that means there is a lot of room for an increase in minimum wage. However, he also acknowledged that many small and medium enterprises could not afford to pay the living wage of RM2,700 prescribed by Bank Negara Malaysia.

MIER also raised Malaysia’s gross domestic product (GDP) growth forecast for 2018 to 5.5% from 5.4% previously, driven by domestic demand, reinforced by a strong external sector. However, it expects GDP growth to weaken to the range of 4.8% to 5.3% in 2019.

“We can still rely on consumer spending to drive the economy with import and export remaining promising even though we experienced absolute trade reduction in February,” Zakariah added.

However, MIER has forecast domestic demand to grow at a slower pace of 5.8% year-on-year (y-o-y) this year, compared with 6.5% last year, and further moderate to 5.3% next year.

“We think inflationary pressure will go down this year as the exchange rate has improved which means there will be less pressure on imported inflation,” said Zakariah.

On the ringgit, he noted that it has appreciated significantly from 4.50 against the US dollar previously, and sees it improving to between 3.65 and 3.70 by the end of this year if the momentum were to continue.

He said the stable ringgit would definitely strengthen the purchasing power as the domestic price tends to move downward.

Zakariah said that while the consumer sentiment index improved in the first quarter of 2018 (1Q18) to 91 from 82.6 in 4Q17, however, it still remained below the confidence threshold of 100.

He added that consumer sentiment as a whole still has the potential to move the economy and it would be good for policymakers to encourage consumers to spend despite the cautious outlook.