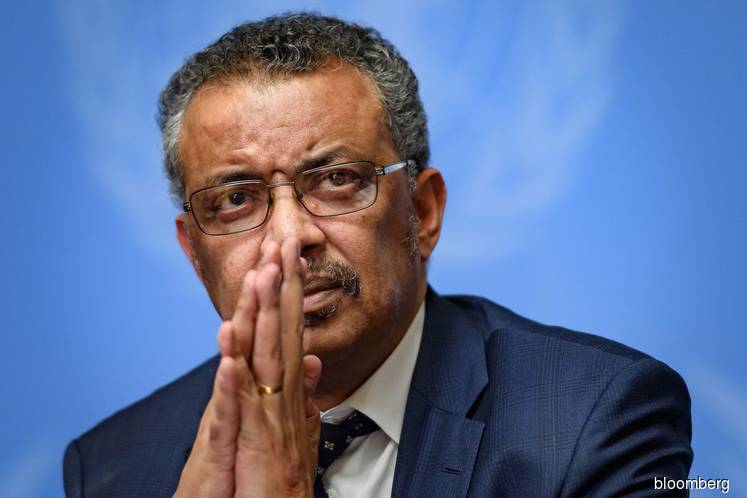 (Feb 24): Tedros Adhanom Ghebreyesus has perhaps the most thankless job in global public health. As director-general of the World Health Organization, the former Ethiopian health minister is racing against time to prevent a dangerous new coronavirus in China from precipitating a worldwide pandemic.

Yet containing and unlocking the secrets of a novel virus that emerged in Wuhan, once a flourishing mega-city of 11 million, is only part of the challenge. Tedros is also engaged in a delicate diplomatic dance with a Chinese government that’s sensitive to perceived slights and a big financial supporter of countries across Africa, including Ethiopia, where he also served as foreign minister and a high-ranking member of its former ruling coalition.

Tedros needs the support of China’s all-powerful President Xi Jinping to increase on-the-ground access for the world’s best infectious disease experts. Xi, meanwhile, is facing public anger over his government’s handling of the crisis and has bristled at foreign criticism.

As the world’s first responder to public health crises, Tedros must “strike this complicated balance between being a member-state organization and being this evidence-based beacon on a hill,” said Rebecca Katz, director of Georgetown University’s Center for Global Health Science and Security. “It’s not a job that I would want to do.”

The viral disease, known as Covid-19, has killed more than 2,400 people and reached four continents in less than two months. On Jan. 30, Tedros, after initially hesitating, declared an international emergency. Now, with new hot spots emerging in Japan, South Korea and Iran, Tedros’s team may need to declare a pandemic if the virus keeps spreading.

Regarding the epicenter of this crisis, Tedros has consistently backed China, despite evidence that the government was slow to react, silenced scientists at home and resisted cooperation with international disease-trackers. After weeks of wrangling, a WHO response team finally appears headed to Hubei province, where the outbreak erupted.

Experts credit China with quickly sharing the virus’s genetic sequence and being far more open than during the 2003 SARS outbreak that killed 774 people. Since SARS, WHO’s member nations have signed a health treaty to maintain greater openness and information-sharing in response to fast-moving epidemics.

Yet China isn’t living up to that 2005 agreement, according to Shigeru Omi, president of the Japan Community Health Care Organization. Japan has become a hot spot for Covid-19 with more than 130 cases, and had the largest cluster of infections outside China on the Diamond Princess cruise ship docked at Yokohama.

“The reality is that the response in the city of Wuhan was delayed in comparison with the letter and spirit stipulated in the revised international regulations,” said Omi, who was WHO’s regional director for the Western Pacific during the SARS outbreak. China has been criticized for muzzling doctors who called early attention to the mysterious pneumonia, like Li Wenliang—who later died of infection—and delays in reporting apparent human-to-human transmission.

WHO said it engages all member states in frank discussions and doesn’t treat China differently, and Tedros declared an international emergency as soon as human-to-human transmission outside China was reported. Other nations have commended China for its actions such as its quick sharing of DNA data, notification of Germany that a visitor had returned to China with signs of infection, and the personal sacrifices entailed by the quarantine of millions of people in Wuhan and its surroundings, the agency said.

Tedros has been in crisis-management mode for weeks. He is leading almost-daily press conferences and internal meetings on Covid-19, regularly updating the United Nations leadership on the crisis. He speaks personally with health ministers and others from affected countries, while overseeing an emergencies division responding to hundreds of other events worldwide. He’s warned of a staggering loss of life that could take place if the coronavirus spreads to poor nations. WHO has asked its members for about $675 million in emergency funds, and Tedros said last week the response has been tepid.

“I have been through difficult conditions and situations in my life, that have sometimes been a matter of survival,” said Tedros, who declined to be interviewed, in an emailed response to questions. “To be effective in difficult situations, I have learned to calm down and focus on doing the right thing and making the correct decisions.”

Tedros has shown skill in dealing with the complexities of China’s authoritarian government. His background in the socialist-rooted Tigray People’s Liberation Front has helped give him insight into China’s rigid system, according to Stephen Morrison, director of the Center for Strategic and International Studies’ Global Health Policy Center.

“He’s lived in structures like that for years in Ethiopia and was part of a peasant-based mass movement that overthrew a repressive military machine,” Morrison said. “He has an unusually good understanding of how the Chinese look at the world and how they look at their internal dynamics.”

Born in 1965 in Eritrea, then a province of Ethiopia and now a separate country, Tedros earned degrees in infectious disease and public health in the U.K. He studied the transmission of malaria, a persistent tropical disease that kills about 400,000 people annually, most of them in Africa.

He returned to his home country to head up a regional health bureau in the province of Tigray, where he pushed for sharp increases in staffing and immunization, and achieved reductions in diseases like HIV and infectious meningitis. He was later promoted to health minister before being put in charge of foreign affairs.

The expansion of health services he oversaw in Ethiopia involved tens of thousands of community health workers who provided basic needs like mosquito bed nets to prevent malaria and access to contraception, said Thomas Frieden, a former head of the U.S. Centers for Disease Control and Prevention.

“It’s one of the most impressive global health programs I’ve ever seen,” Frieden said in an interview. “It was one of the main reasons Ethiopia was able to make substantial progress in health.”

Elected to head WHO in 2017, Tedros is the first African to lead the agency as well as the first non-physician. Normally a deft politician, he made a rare misstep by naming former Zimbabwean President Robert Mugabe—who died last year after a regime noted for violent political repression—a goodwill ambassador for WHO. The move was quickly rescinded after an outcry.

Tedros’s years in Ethiopian politics saw a rise in China’s influence, as the country invested heavily in railway and hydropower infrastructure projects, as well as its sugar and telecommunication industries.

All told, the country received $24.5 billion in Chinese contracts and investment from 2005 through last year, according to the American Enterprise Institute. That was about 8% of the money the superpower put in sub-Saharan Africa during that time, and Ethiopia was No. 2 in Chinese foreign direct investment in the region, according to AEI’s China investment tracker. After years of uneven performance, Ethiopia’s economic growth was consistently above 8.5% for most of 2005-2017, World Bank data show. While not without drawbacks, the results of the investment in Ethiopia have been positive, and have likely earned China goodwill there, said Morrison.

The WHO director-general is chosen by secret ballot, and it’s unknown whether China supported Tedros. The 2006 election of Margaret Chan, once WHO’s head of pandemic planning and the first Chinese person to serve as director-general, led to increased involvement for China at the agency, according to Cai Jiangnan, chairman of the Academy of China Healthcare Innovation Platform.

Tedros doesn’t have the legal power to institute quarantines, isolate the infectious, and commandeer funds or materials. In some ways, the WHO is more like a doctor who offers advice that sovereign states can choose to heed or ignore, just like any patient.

Responding to emerging pathogens, often transmitted from animals to humans, has become the agency’s most visible task. Tedros was directly and frequently involved with the response to Ebola virus in the Democratic Republic of Congo, where violence toward health-care workers exacerbated the epidemic, said Anthony Fauci, director of the U.S. National Institute for Allergy and Infectious Diseases.

“He was a hands-on guy,” according to Fauci, who said he began working with Tedros on controlling HIV in Ethiopia. “He’s really solid. He went into the hot zone multiple times.”

During the current crisis, the U.S. and China have clashed over getting more experts into Hubei province, of which Wuhan is the capital, to respond to the outbreak.

The researchers “need to really get a feel for what this lockdown is doing in Wuhan,” Fauci said. “It may very well be that it’s been effective in containing the efflux of people from China to the rest of the world and Wuhan to the rest of China.”

Some observers say that Tedros is ignoring the human rights implications of the massive quarantine. The WHO should make clear how the lockdown of some 50 million people is both effective and humane, said Lawrence Gostin, a Georgetown professor of global health law.

“The greatest restriction in the history of humankind is taking place in China, and they’ve said nothing about that,” said Gostin, who opposed Tedros’s election to director-general.

WHO said Feb. 18 that studies indicate the quarantine probably delayed the spread of the virus around the country by about two or three days and postponed international spread by two to three weeks, giving other countries time to prepare and respond.

Gostin said he hasn’t seen the data behind that conclusion and still has concerns about the spread of disease after the lockdown is lifted. Still, he said he admires Tedros and appreciates the difficulty of the situation. Tedros is “faced with an almost unwinnable dilemma,” Gostin said. Public criticism of China risks pushing it away from cooperation and transparency, he said.

A thorough review of the emergency will have to wait until it’s over, Tedros said. For now, focusing on the ongoing outbreak is key.