Converted hotels around the world 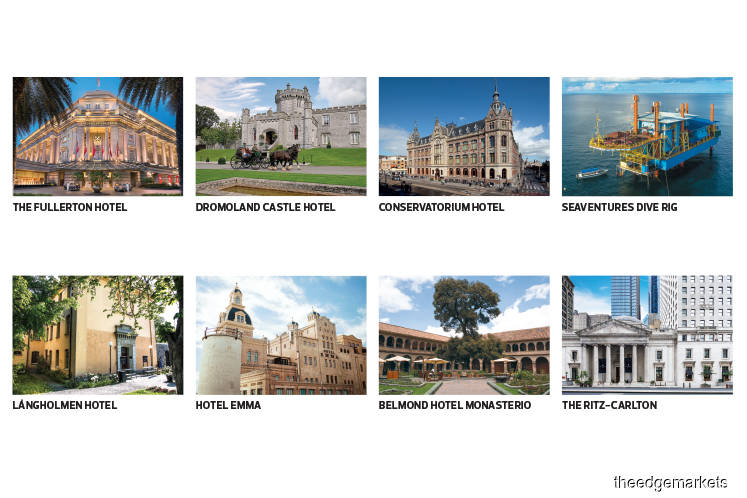 Situated near the mouth of the Singapore River, The Fullerton Hotel was originally known as the Fullerton Building. It is named after Robert Fullerton, the first governor of the United Straits Settlements from 1826 to 1830.

The building’s distinguished previous occupants include Singapore’s General Post Office, The Chamber of Commerce and The Singapore Club.

The building was commissioned in 1924 as part of the British colony’s centennial celebrations and designed as an office by British international architecture firm Keys & Dowdeswell.

The Fullerton Building was transformed into a hotel after a S$400 million restoration in 2001. It currently offers 400 rooms and a 2-storey commercial complex called One Fullerton, located opposite the hotel.

In order for The Fullerton Hotel to be visible from Marina Bay, the Urban Redevelopment Authority — the national urban planning authority of Singapore — specified a low building height for One Fullerton. Dromoland Castle was the ancestral home of the O’Briens of Dromoland, one of the few native Gaelic families of royal blood and direct descendants of Brian Broimhe (Boru), High King of Ireland in the 11th century.

The castle, among the most well-known baronial castles in Ireland, underwent major renovations in 1936 and was transformed into a five-star hotel with a golf course and a restaurant, Earl of Thomond, which was awarded a Michelin star in 1995.

The 16th-century castle hotel completed the final phase of a full-scale €20 million refurbishment in 2019. Its owners worked under the guidance of the Irish Georgian Society to respect Ireland’s architectural heritage, and used traditional skills and craftsmanship while incorporating the most up-to-date building technology. The aim was to preserve the castle’s historic charm while enhancing its legacy for future generations. Built in the late 19th century, the Conservatorium Hotel in Amsterdam was originally a bank designed by Dutch architect Daniel Knuttel. When the bank moved out following a series of mergers, the building was abandoned in 1978. After lying empty for five years, it became the home of the newly formed Sweelinck Conservatorium (a music institution).

In April 2008, the conservatorium outgrew the building and moved out, and in the same year, The Set — an interior fitting contractor in Amsterdam — purchased the building.

It was then refurbished and remodelled for use as a hotel by Milan-based architect and interior designer Piero Lissoni. The endeavour took four years to complete and the hotel was officially opened in December 2011.

The hotel has 129 rooms, including 46 suites, across eight floors and ranging in size from 28 to 170 sq m. Half of the rooms have been configured into duplex layouts with oversized functional windows and exposed structural beams. Located close to Sipadan island, this unique hotel known as The Rig provides divers with a remarkable dive site to explore. Once used as an accommodation module in the oil and gas industry, it was towed and used across various locations until it was decommissioned in 1985 and left in a Singaporean shipyard.

The rig was then relocated to its current location in 1997. The structure and shelter have formed a haven for marine life and was refurbished into a hotel to accommodate resort guests.

In order to get there, guests are required to fly to Tawau, Sabah. Free transport will be provided to Semporna town — the capital of Semporna district in the Tawau division of Sabah — which is about an hour’s drive away. From Semporna, guests take a boat to the rig.

Its facilities include a games room equipped with snooker, mahjong and table tennis facilities, and a conference room for screening videos or group meetings. There are also boats for guests to go across to Mabul Island, which is located opposite the Rig.

The sundeck is the only place to enjoy unobstructed views of the islands surrounding the area and offers some of the best sunset shots.

Långholmen is a long and narrow island in Stockholm that has remnants of ancient dwellings dating back to the 10th century. The island is also the location of the Långholmen Hotel, once the largest prison in Sweden. Built in 1880, it was the country’s central prison, and had more than 500 cells. The prison’s development triggered the infrastructural growth of the town. Several establishments were set up along the waterfront to the Mälaren, the third largest freshwater lake in Sweden, in the latter half of the 19th century.

With 3,000 trees planted by the prisoners, the island is considered a green oasis amid the rough oceans and craggy rocks. At the beginning of the 20th century, the city created paths and planted areas for visitors.

The prison was closed down in 1975 and some parts were demolished in 1982. It was converted into a luxurious hotel thereafter.

Now recognised as a popular tourist attraction, the Långholmen Hotel was opened in 1989. It houses a hotel and hostel, a conference centre and prison museum. Guests can choose from 500 single, double and family-sized cells.

There is also a restaurant, formerly the prison’s hospital, which serves traditional Swedish fare such as pickled herring.

San Antonio, the US Designed by Chicago architect August Maritzen, Hotel Emma overlooks the San Antonio River, a major waterway that originates in central Texas. It was originally Pearl’s Brewhouse, an American brewery established in 1883. The brewery was officially closed in 2001, and in 2002, private equity firm Silver Ventures purchased the property.

Construction of the hotel started in December 2012, based on a design by New York architecture firm Roman and Williams. Much of the original architecture, including the original 134ft brewery tower, was retained, and machinery and pieces salvaged.

The 146-room boutique hotel opened in 2015. In addition to rooms, it offers cellar spaces for events, receptions and gatherings. The hotel has three epicurean properties — Supper and American Eatery; Larder, which sells fine groceries and provisions; and Sternewirth Bar and Clubroom. Built on the foundations of Amaru Qhala’s Inca palace, the building was damaged during an earthquake in 1650.

It was transformed into a hotel in 1996, and acquired by Orient Express three years later and renamed Belmond Hotel Monasterio in 2014. The beautifully preserved hotel is integral to the heart of Unesco-recognised Cusco and is protected as a national monument by Peru’s National Institute of Culture.

The beamed and painted ceilings, tiled floors and hand-painted decorative frescos that are the key architectural features of the building can be witnessed in the interior and the 122 guest rooms. It also hosts one of Cusco’s finest collections of 18th century colonial religious art. The original paintings are displayed in both the shared spaces and bedrooms.

Part of the building has remained unchanged since its monastic days. For example, the stones around the entrance doors still bear the Spanish Arms escutcheon and the image of Bishop Monsignor Juan Serricolea y Olea.

Also unchanged is the exquisite Chapel of Saint Antonio Abad, located just inside the main entrance. It has a gilded, baroque interior covered floor to ceiling in gold-framed paintings, mostly featuring scenes from the life of the saint himself. The chapel is a popular location for weddings and is sometimes used for concerts. Built between 1904 and 1908, the hotel has two components — the rotunda (a building with a circular ground plan and covered by a dome) and an ­8-storey tower designed in neoclassical style made popular by that era’s Chicago World’s Fair.

The building transitioned to house the Girard Trust Corn Exchange in 1951, then the Girard Bank in 1970 and subsequently, the Mellon Bank East in 1984. At the turn of the century, it was converted into a hotel and opened as The Ritz-Carlton, Philadelphia in 2000.

The building’s banking history has been incorporated into its design palette and the colour scheme reflects the rich colours of precious metals and currencies.

The hotel’s location on the Avenue of the Arts also serves as design inspiration, as it has an extensive art collection that celebrates the Avenue’s cultural prominence as the art, music and theatre centre of Philadelphia.

In 2019, The Ritz-Carlton, Philadelphia completed a multi-million hotel renewal project, which included 330 guest rooms and suites, a Club Lounge, meeting and event spaces, and a refreshed lobby with a new restaurant, bar and lounge called Aqimero.

An interesting bit of trivia: The stairs and banister leading to The Grand Ballroom, formerly the vault of Girard Bank, is warped or twisted on one side to take into account the fashion of the era when ladies wore very long skirts. They would make their “grand entrance” into the vault to retrieve their jewels on Friday for their weekend social event and return them on Monday.