Both a conversation piece and a strong visual anchor, the walk-in wine cellar that forms the visual anchor of this kitchen is unique for its size and impact, and is a feature that directly relates to the homeowner’s businessAlthough the dining area, which features a beatifully repurposed wooden door as a table, is in the adjacent space 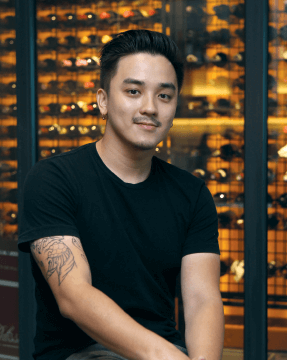 A sleek red screen affords some privacy to the homeowner’s private quarters, shielding bedrooms and the study from the attention of guests who happen to be lounging in the kitchen and in the dining area. This is also a unique attraction, as the table, which consists of a repurposed wooden door, features benches on one side and comfortable chairs on the other.

The best kind of home is one that reflects its owner’s personality and preoccupations. For example, the main attraction of a florist’s home could be floral inspirations throughout the house, while a joyful home with many children could be colourful and custom-built to cater for their various needs.

In a cosy and welcoming apartment at The View @ Serai Saujana, the huge wine cellar and a fully-equipped kitchen right inside the front door clearly announces the homeowner’s passions — wine, spirits and entertaining.

Running a lifestyle business involving luxury cars, wellness and wines and spirits, the owner of this charming space needed to do a lot of entertaining at home. He needed a kitchen-cum-dining space that is intimate and personal, yet comfortable and posh enough to entertain clients as well as friends.

The kitchen, dining room and wine cellar were anchoring points that designer JC from interior design studio Whitespade was to work with. Upon entering the front door, the wine cellar is on the right and the kitchen on the left. They subscribe to a distinctly industrial aesthetic — the coolness of cement and the subtle shine of the chrome appliances are tempered by warm wood cabinetry.

The kitchen is particularly unique for its articulation — as well-suited as a traditional set-up is when it comes to cooking local food, a more contemporary approach creates a more welcoming and stylish feel. An island unit consists of convection stovetops, counter space to work on and plenty of storage, which fronts a parallel set of cabinets built into the wall. A wet kitchen is hidden from sight behind a door that is flush with the wall on one side.

A row of bar stools at the island often makes the dining table superfluous, explains the owner. Of course, the table — a beautifully repurposed wooden door — is necessary when he has larger groups of people or holds more formal soirées, he adds. During our interview, we were drawn to the warmly lit island and barely spent any time on the plush sofas in the hall or on the balcony with its expansive views of the award-winning Saujana Golf and Country Club. With music emanating from well-placed speakers and mugs of coffee to fuel our conversation, we felt very much at home – which, according to the homeowner, echoes the activities of guests who come here.

Aside from the convivial feel of the space, the anchoring point that the wine cellar provides is also quite compelling, even if you indulge in nothing from its coffers.

Inspired by a bar in Sydney, JC gave the walk-in wine cellar much warmer tones and made it a focal point of the abode. “Although we have designed wine cellars before as part of a home, none has ever been this size, or commanded this sort of importance,” JC shares. “We were toying with a lot of ideas as to where it should go, and finally we gave it the most prominent wall in the house because it was an element that really deserved attention.”

Although the aesthetic inspirations for the house are not entirely new, its layout is certainly quite unique — it is a blend of all the above elements that makes the kitchen area so appealing.

But it was not a formula that was arrived at easily. After acquiring an empty property that no designer could transform in accordance to his wishes, the homeowner finally found a kindred spirit in JC and his modern, clean style. “He came to me with a very clear brief,” the tattooed JC relates. “Since he’d been through a number of designers, I think he was very clear about what he did and did not want. Within the constraints of his requests, none of which were unreasonable, and his sense of style, which mirrored what I also liked, I was given free rein to redesign the space.”

This discerning homeowner liked the idea of industrial chic, but wanted some warmth and homeliness. He also liked the idea of unusual design elements, and would quite happily throw his support behind unconventional ideas if it worked for him and his needs.“He’s the kind of client all designers want,” JC admits with a laugh.

Beyond the kitchen, a bright red retractable screen provides some well-needed privacy while serving as a visual anchor for the sanctuary section of the home. We never made it into this area — which includes a modern and all-white study and the bedroom — to be honest. We were having too much fun in the kitchen.