The conversation In Between Floors

STEREOTYPING is welcomed for once, or in the case of In Between Floors — a movie about an Ah Beng and a Banana stuck in the elevator together — exploring the stereotypes that make up two opposing spectrums of a cultural identity.

Only the 5th predominantly English film — with parts in Cantonese and colloquial Malaysian slang — to be made in Malaysia, In Between Floors features water filter salesman Kenth and ghost tweet writer Sharon, office building enemies who find themselves unexpectedly forced to interact with one another in an effort to survive and hopefully, get out of a trapped elevator. Only a mysterious but gonzo security guard’s voice acts as a lifeline.

The result is an astute, sincere, sometimes profound but overall quite funny film that one wonders why it took quite so long for a movie about this topic to be made.

It is a great relief, nevertheless, that it was done in this manner. The 90-minute movie steers clear from the clichéd or contrived; it is a refreshingly straightforward premise that is impressive in that it holds attention easily despite more than 80 minutes of it featuring the two characters stuck in the elevator, thanks to the well-paced and nuanced script.

So what is an Ah Beng 2.0? Despite the name Kenth Chu — the issue of typical Asians and made-up Chinese names is amusingly addressed here — the salesman is a Catholic High School-educated, university graduate who speaks English quite a bit better than expected.

In fact, that was what self-confessed “highly evolved Ah Beng 4.0”, veteran actor Alvin Wong queried when he came on board.

“I wondered if the Ah Beng would be like a VCD or DVD seller type, or what?” said Wong at a press conference on the film last week. He signed to act on thwe film after reading the script, which dispelled his initial hesitation because of the mostly static location.

Staring in the mirror?

Screenwriter and director Bernice Low (Kopitiam, Getting Together) said that they had to work hard on “degrading” the English standards of the character, because it started off a little too good in the dialogue written. She explained, however, that she was mindful not to over stereotype the character, “If the language barrier was too wide, the connection and ability to communicate would have too wide a gap,” making the crucial chemistry of the characters non-believable.

Vice versa, the “Banana” had to have impeccable English, which explained the casting of Dawn Cheong, who was raised in New Zealand. “I had to tell Dawn to re-do a sentence on occasion just because the grammar slipped a little,” pointed out Low.

Only arriving back in Malaysia a few years ago to pursue an acting career here, the theatre-trained actress then quipped, “I think my English got worse because I was hanging out so much with Alvin.”

Wong sympathised, since he had more freedom to improvise and play with his lines to add the “ah beng” factor. “It’s a little tougher for her. The movie is about two people from the same ethnicity but from very different backgrounds, putting themselves half into each other’s respective worlds,” said Wong, “But Dawn is very foreign to the whole Chinese culture thing, while I’ve soaked myself a lot in her part of the world for many years, especially pop culture.”

Cheong explained that despite the social and cultural observation that is the core of the movie, it was not just about playing up the personalities or their perception of what the two stereotypes are. “You don’t just assume things like that, but you try to put yourself into work first.”

But she admitted with a smile that she identified with Sharon’s character quite a bit, adding that it wasn’t difficult to draw inspiration, especially seeing every day versions of Sharon in places such as Bangsar or Mont’ Kiara.

Low would beg to differ, ribbing Cheong as an ‘ah lian’ inside despite her foreign accent, who actually lives in Cheras (as does her character in the film).

The director went on to confess that it was a deliberate decision to cast both Cheong and Wong as an “act of manipulation” as both were very similar to their character moulds.

Aside from taking into account the former’s abilities to bring a level of intensity to the dialogue as a theatre actress, and the latter’s experience in TV and film to keep the pacing good and make sure the character holds his own, Low said it also all comes down to money, or the lack of it.

As a frustrated scriptwriter trying to get people to buy into the idea of a mixed language film on a RM1 million budget quite a few years ago, the short brief is that she finally decided to “take one zero off the budget” and find a way to make a film on her own.

The benchmark, as a friend asked her, was “How much do you have [in savings]? Enough to buy a small car or not?” Not sure which small car model her friend meant, Low recounted that she went with the lowest and out came the initial budget of RM40, 000.

“We’ve blown it twice over since then,” said the first time director with a laugh, stating that it was simply not a realistic number now.

Though she was candid about her crazy idea to film the entire movie in 24 hours in a real elevator, it didn’t go ahead after advice from production experts. Instead, In Between Floors was shot in four days entirely in a studio with the elevator set built from scratch.

On such a tight schedule, she did not have time for actors or herself to dawdle over scenes. “We were very tough on them. In the last two days, we didn’t allow them to leave the set literally, except to go to the bathroom,” explained Low, because they were so pressed for time.

To break the monotony, award-winning veteran actor Chew Kin Wah lent his voice and profile shot as the security guard aka ‘the voice of god’. Insisting that his face not be shown, Chew’s mysterious character is deliberately left un-explained and ambiguous.

Being just a voice, Low said she needed someone who can carry that drama and gravitas of such an “overwhelming character”. Recording all his lines in just 40 minutes, Chew said the lack of camera in his face gave him the boldness to read it as he liked it. That produced the unpredictable result of his character and heightened the interaction between Kenth and Sharon.

In the film, Sharon called Kenth a “mango”, someone yellow on the outside and inside. The topic is one that draws deep from Low’s own experiences and encounters, especially working with industry people from both English and Chinese mediums.

Educated in the United Kingdom and then in UCLA, United States, Low clearly considers herself a ‘banana’ — the minority of a minority, albeit a somewhat exposed one. Having crossed worlds often, as she put it with clients from the other side of the divide, the lawyer-turned screenwriter found the dichotomy of both worlds very interesting.

Ultimately, her point is not about which side emerging victorious. “If you watch the film, I feel that you won’t really come out feeling that one character is better than the other.”

Stating that the film merely brings out what people do talk about, perhaps not openly, this is her attempt in opening up a rather universal theme for discussion, without “shoving a ‘this is right, this is wrong’ down people’s throats.”

As for the most-asked question: “Will Kenth Chu and Sharon Tong fall in love in the end?” Low’s response gives a hint…. “You must be joking!” She qualifies, however, that she believes if the ‘bananas’ and ‘ah bengs’ get together, they’ll take over the world. 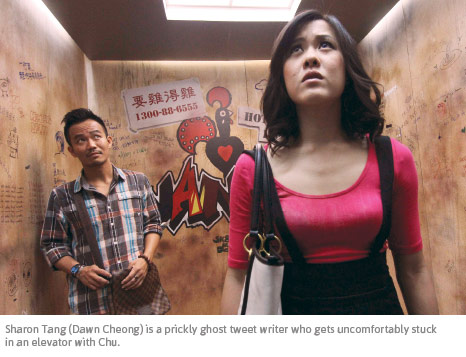 This article first appeared in The Edge Financial Daily, on November 27, 2014