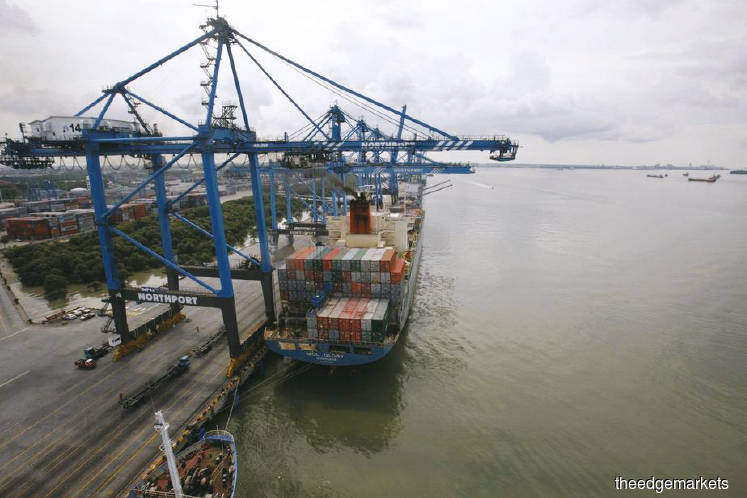 Filepic of a container ship being anchored at North Port in Port Klang. Goods that once occupied these containers are now filling up third-party warehouses in the country. (Photo by Reuters)

KUALA LUMPUR: Containers stuck at the nation’s ports are being cleared, easing the congestion caused by the implementation of the movement control order (MCO) to halt the spread of Covid-19. However, both raw materials and finished goods are now piling up in warehouses as some companies face difficult export conditions and are not manufacturing goods during the MCO period.

Federation of Malaysian Freight Forwarders (FMFF) president Alvin Chua said freight forwarders — whose services have been deemed as essential services during the MCO — have been moving cargo for businesses that have received the green light to do so from the ministry of international trade and industry (Miti).

However, the goods that once occupied these containers are now filling up third-party warehouses in the country, which are already seeing a greater volume of finished goods entering their doors as companies, especially those in the manufacturing industry, are unable to export their goods due to lockdowns abroad.

Chua highlighted that while the number of containers stuck at Port Klang had gone down, they are not at pre-MCO levels. He explained that because of the MCO initially not allowing the transport of non-essential goods, as much as 70% of the port’s import container storage capacity was taken up by containers. However, since the government has now allowed for the clearance of containers from ports, this has come down to 50% to 60% of Port Klang’s import container storage capacity.

As it stands, there are 50,000 twenty-foot equivalent units (TEUs) still stuck at the port. The bulk of these containers contain materials for the construction and automotive industries. This translates into around 50% of Port Klang’s import storage capacity, a far cry from the 20,000 TEUs typically left in storage prior to the MCO.

He noted that while these goods will be delivered to their final destinations, it is unlikely that all of the goods locked in these containers would be delivered until after the MCO is slated to end next week on April 28 — as it would take five days for such businesses to get the approval from Miti to operate and bring the materials in.

Chua explained that the reason for third-party warehouses reaching their capacity is that many businesses — especially those in the non-essential sectors — do not have the approval from Miti to operate during the MCO.

In the case of businesses involved in the manufacturing sector, many businesses do not have the appropriate approvals to manufacture. This means that the raw materials end up being stuck in warehouses.

For those that have the approval or have already manufactured finished products, the lower demand for goods abroad following lockdowns to halt the spread of the virus has also mitigated demand for Malaysian exports.

As a result, warehouses are now seeing a greater influx of raw materials destined for further processing and finished goods that were destined for export.

“Having the approval letter from Miti to transport the goods does not necessarily mean that you can start manufacturing in full again. This is as the approval is for certain manufacturing activities and not all industries are covered,” said Chua.

According to Miti’s expanded list of essential services during the third phase of the MCO, the only activities permitted under the auto industry are the export of completely built-up vehicles, parts and components as well as aftersales services such as repair and maintenance.

For the construction industry, only a select number of activities (pending approval) may be undertaken. For example, tunnelling, maintenance and sloping works are allowed.

Chua also noted that logistics and transport players (including freight forwarders) are required to apply for the approval to operate by Miti. Of the 1,300 members under the FMFF, some 5% or 65 of its members have received the nod from the ministry.

He also noted that the ministry of transport had been working with Miti to speed up the approval process — which typically takes five days — for the entire transport and logistics sector — with the FMFF submitting its member list for to the two ministries.

More, however, needs to be done to ensure that there is better communication between the different government agencies when it comes to the necessary documentation.

In particular, the on-ground personnel police should be given constant updates ovn which approval certificates are needed.

Transport Minister Datuk Seri Dr Wee Ka Siong said last Friday that the fourth phase of the port clearing exercise would take place starting yesterday until Thursday to ensure the smooth capacity of Malaysia’s ports and space capacity are at an optimum level.

The fourth phase of the cargo release is vital to ensure uninterrupted supply of necessities to the public during the third phase of the MCO.

Standard operating procedures that have been earlier communicated to port operators in Port Klang, Johor, Penang, Kuantan, Melaka, Bintulu, and Padang Besar have also been circulated among state government-owned ports.

The previous port clearing exercises were carried out on March 27 to March 29, April 4 to April 7 and April 13 to 15.