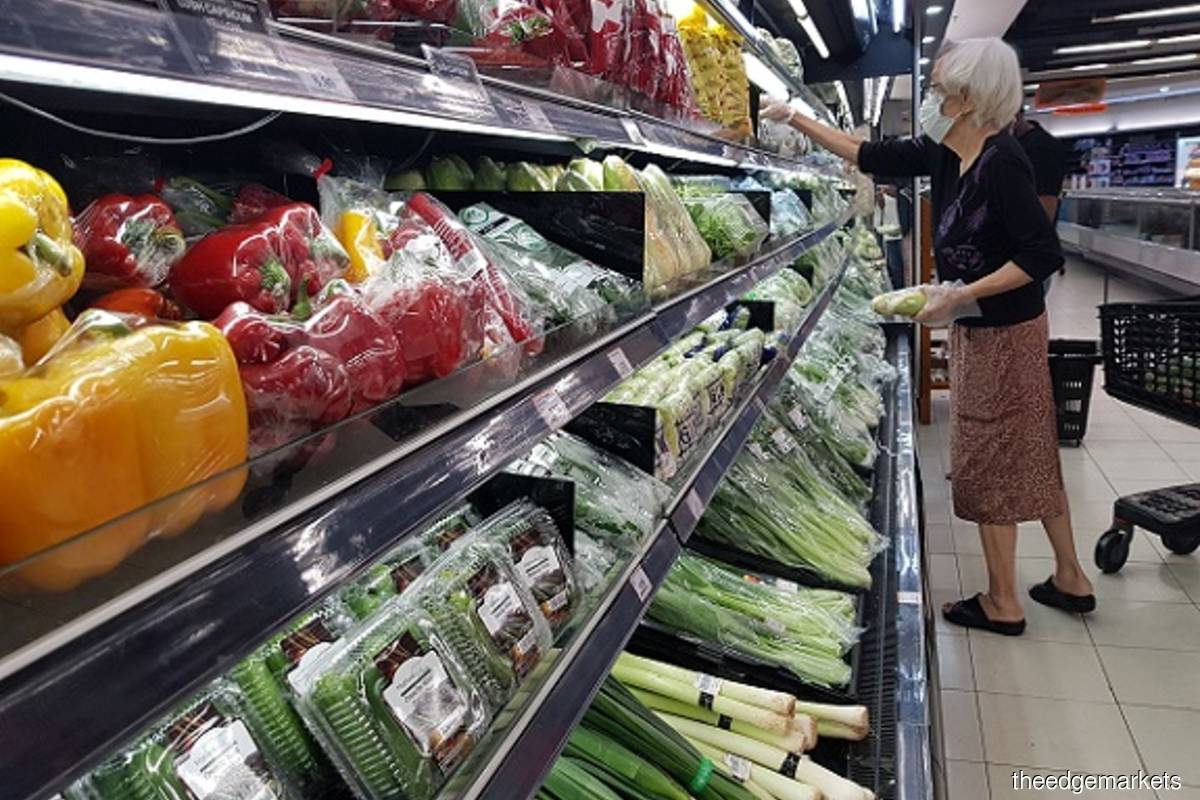 A consumer is seen shopping at a hypermarket in Klang Valley on Thursday May 27, 2021. (Photo by Suhaimi Yusuf/The Edge filepix) KUALA LUMPUR (June 3): Consumer stocks and retail counters involved in consumer staples are most capable of withstanding the headwinds arising from the full-scale Movement Control Order (FMCO) that has been imposed for two weeks until June 14.

Experts told theedgemarkets.com that businesses involved in the provision of consumer staples, as well as those who sell goods at more accessible price points will remain resilient.

However, an expected ramp-up in Covid-19 vaccinations will soften the blow of this lockdown, they note.

Speaking to theedgemarkets.com, Areca Capital Sdn Bhd Chief Executive Officer (CEO) Danny Wong noted that the operating environment for the sector will prove to be challenging, particularly for retailers and consumer stocks whose businesses are concentrated in shopping malls.

Wong said investors evaluating the consumer sector should look at companies with strong cashflows and attractive valuatons, noting that the sector would not be his first pick amid the current macro-economic conditions.

Moving forward, he expected retailer and consumer stocks involved in the sale of discretionary goods to continue being adversely impacted by poorer consumer sentiment.

“Of course, this is dependent on the type and price point of the goods being sold by a particular retail operation,” he highlighted.

“I think generally consumer stocks under the essentials category should continue to do well. Hence it is good to bargain hunt at the moment,” he said.

Concurring with Wong, Low pointed out that that essential goods in demand by a wider market should continue to do well.

Meanwhile, Principal Asset Management Chief Investment Officer Patrick Chang opined that investors should keep an eye on the consumer sector, given that it is a proxy beneficiary towards the reopening theme.

In the near-term, he noted that the consumer staple sector will likely benefit from the current full-scale lockdown because of the movement restrictions and prohibition on in-store dine-ins, which discourages consumers from going out.

“Consequently, staple goods would be a benefit as consumers result in stocking up on basic essential items as in-home consumption becomes the new default.

Besides the ongoing vaccination programme, sentiments will also be lifted by an anticipated loosening of movement restrictions, he said.

Based on historical trends in the past year, consumers were keen to go out once restrictions were lifted, he added.

According to Chang, all consumer subsectors should be better prepared to face the FMCO by now, as the pandemic has raged for over a year.

Chang contended that this has resulted in a survival of the fittest within the consumer space, with those who have suffered already weeded out at this point in time.

“However, the consumer subsector that can best weather the full-scale MCO are those that are more digitally equipped in integrating online to their daily operations.

“This is because, under a full lockdown environment whereby mall traffic is severely impacted and non-essential store closures are enforced, affected corporates would need an alternative source to conduct their business. Hence, the need for e-commerce presence under this environment is of utmost importance,” Chang said.

In a note on Monday, CGS-CIMB’s Ivy Ng and Michelle Chia said that the FMCO will dampen near-term sentiment for recovery plays such as retail stocks amid earnings fears.

Meanwhile, Hong Leong Investment Bank (HLIB)’s Jeremy Goh, Felicia Ling and Goh Khing-Mae pointed out that consumer staples, along with brewers, will see lower “out of home” consumption, while the retail sector is expected to see outlet closures.

That said, the research team at PublicInvest Research believes that the consumer sector, along with the logistics and telecommunications sectors, may benefit from movement restrictions and heightened e-commerce activities.

They noted that consumer staples, namely F&B companies, should see increased activity. Meanwhile, the furniture sub-sector will be hit by the closure of operations, causing it to temporarily missing out on US-driven demand.

In a strategy note on Tuesday, AmInvest Research’s Joshua Ng pointed out that consumer stocks are poised to benefit from the forecasted economic recovery, owing to cash handouts and a recovery in the job market, which is expected to sustain consumption.

For Wong and Chang, the sector’s latest results season came in within expectations. Wong noted that he did not expect the sector to post significantly higher bottom-line earnings.

Chang said that standouts during this quarter came mostly from the retail and discretionary sector on lower base effect from last year, as MCO 1.0 was announced and implemented during the last 2 weeks of March 2020. He stated that the main indicator from recent earrings in the sector shows that under an environment whereby movement restrictions were less restrictive, spending from pent-up demand continues to be strong.