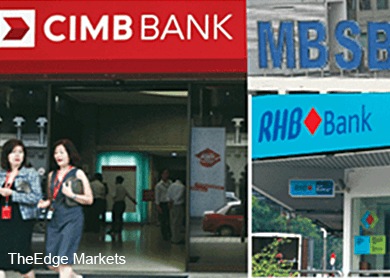 KUALA LUMPUR (Mar 20): Consumer and business groups are urging Putrajaya not to implement the Goods and Services Tax (GST) on basic and essential banking services, such as online banking and over-the-counter transactions.

This comes after reports saying that GST will be charged for online banking, over-the-counter as well as MEPS ATM transactions.

Federation of Malaysian Consumers Association (Fomca) chief executive officer Datuk Paul Selvaraj said services that were not subjected to tax under the sales and services tax (SST), should not be charged GST now.

"We were told that GST is a replacement tax.

"To my knowledge, these services were not taxed before, so they should not be taxed now," he told The Malaysian Insider.

He admitted, however, that it might be too late now to expect the Customs Department to increase the list of items that fall under the zero-rated list.

Items in the zero-rated supply list means no GST is being paid along the chain.

He said if this was the position of the government, then the solution would be for banks to absorb the charges.

"They are promoting online banking, so if GST is still going to be imposed on these services, banks should absorb it," he said.

It was reported yesterday that GST would be payable as a basic charge or fixed fee in connection with commercial banking products and services.

The GST, however, would only be charged on the service fee and not the bill amount.

Selvaraj said since nothing was "cast in stone", he hoped the government would categorise these banking services under the zero-rated list.

He added this was bound to create uneasiness among banking customers if implemented, which he reiterated, covered just about everyone.

"Just like public transportation, banking is an essential service used by everyone.

"And if the government is promoting going cashless, they should not tax basic services such as these," he said.

The Finance Ministry, in a Bernama report on Wednesday had said that the government is going ahead with the implementation of GST on April 1, despite calls for its deferment.

"Any delay will only negatively impact Malaysia's credit rating as the GST introduction is a vital fiscal consolidation measure to ensure the national economy's sustainability," the statement said.

The ministry said the government should diversify its financial resources and not rely on commodities such as petroleum and palm oil, adding the GST must be implemented to ensure the country's economic growth and financial situation remain strong in the future.

Despite the government having taken into consideration the people's welfare, the ministry said that certain quarters were deliberately twisting the facts about the GST implementation.

"Other countries which had implemented GST, or the value-added tax, had experienced issues in the transition phase and Malaysia would be no exception," it said, stressing that any issues arising from the implementation will be dealt with comprehensively and continuously by the government.