Is the construction sector back in favour? 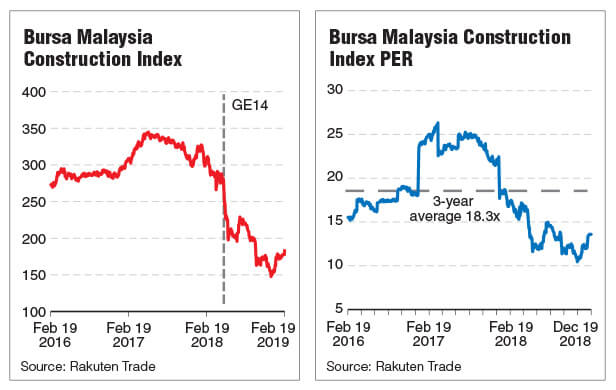 KUALA LUMPUR: The construction sector, the worst-performing sector in 2018 with the Bursa Malaysia Construction Index (KLCON) declining by more than 50% during the year, may now be seeing the light at the end of the tunnel.

An indication of this is the recent recovery in the share prices of construction companies amid talk that the government will revive certain mega infrastructure projects that have been put on hold for further assessments and negotiations.

The potential revival of the East Coast Rail Link (ECRL) project, in particular, has prompted investors to scoop up some oversold property stocks.

“At this juncture, we see limited downside risk for the local construction sector as much of the negatives have already been priced in. The potential revival of the ECRL would be a strong catalyst to the overall sector,” said Jerry Lee Chee Yeong, research analyst at Fundsupermart.com.

“On top of that, looking at the infrastructure development in Malaysia, we are still not in a developed stage, and hence, there is still plenty of room for growth in the future once we see improved financial situation for the country,” Lee added.

Kenny Yee, head of research at Rakuten Trade, is also positive about the construction sector following the news of a possible revival of some of the mega infrastructure projects. He is expecting a potential upside of 20% to 30% from the construction companies’ share prices, noting that the sector’s valuation is lower compared with its historical average.

The KLCON price-earnings ratio (PER) is currently trading at 12 times despite the recent recovery in share prices. Still, it is lower than its three-year historical average of 18.3 times, said Yee.

“Looking at the recent development, we believe the construction sector may stage a revival once the government kick-starts the infrastructure projects in the pipeline, including the most notable one, the ECRL,” he said.

According to Yee, some RM342.5 billion worth of infrastructure projects are in the pipeline, including Light Rail Transit 3 (LRT3), Mass Rapid Transit (MRT2), MRT3 and the Kuala Lumpur-Singapore high-speed rail. The revival of the projects would certainly boost the earnings prospect of construction companies, he said.

The offer by the China Construction Bank to issue Panda bonds to assist Malaysia in reducing the country’s debt level, along with the news that Malaysia is making progress in talks with China on reviving the ECRL, certainly raises the possibility that the rail project will proceed, he added.

Foreign Minister Datuk Saifuddin Abdullah has recently been quoted as saying that China is willing to reduce the US$20 billion (RM81.6 billion) price tag for the ECRL and that talks are “in the last mile”.

That said, however, a local fund manager, who requested anonymity, cautioned that the current recovery in the share prices of construction companies was driven by speculation among investors that these companies will rise back this year.

“It is too early to say that construction has come back. If the revival of the ECRL doesn’t exist, this scenario (recovery in construction companies’ share prices) we see today won’t be happening,” he said.

The fund manager said the construction sector continues to face some uncertainties, with earnings prospect hit by the reduction in the number of jobs from the government.

On the same note, Phillip Capital Management Sdn Bhd chief investment officer Ang Kok Heng said construction players are exposed to margin pressure given the intense competition in the industry and the reduced jobs, although the conditions have improved somewhat from last year.

Ang also said that apart from the ECRL, the chances of a revival of the mega infrastructure projects remain doubtful given that the government is highly indebted.

“Investors should not forget that most of the projects that are expected to be revived would be smaller in terms of value compared to those awarded in recent years. Hence, we are likely to see lower profit margin and slower earnings growth for the contractors,” he added.

“Currently, the PER for the construction sector is trading between 13 and 14 times and the valuation is quite fair compared to the five-year historical average of between 11 and 13 times.

“I do not foresee any earnings upside surprise from the construction companies’ earnings prospect. Even if the big projects like the ECRL and LRT3 [proceeded], the earnings wouldn’t be reflected immediately. It will take some time, depending on when the project will kick-start,” said Leong.

He added that he expects the construction sector to see a tepid earnings growth of between 5% and 10% in 2019.

Leong’s top stock pick for the sector is Econpile Holdings Bhd. He said the group’s activity in piling and foundation works is fairly niche in the industry, and it has clear earnings visibility in the coming two to three years backed by an order book worth RM1.1 billion.

Leong added that HSS Engineers Bhd and Lafarge Malaysia Bhd are two major beneficiaries if the government revives the ECRL, based on the fact that both companies have secured jobs from the ECRL previously.

Yee, who is “neutral” on the construction sector, has also chosen Econpile as his top stock pick with a target price of 63 sen based on its 11 times PER.

“The stock is currently trading at 8.5 times PER compare to KLCON PER of 12 times which provides an attractive level of entry opportunity,” he said.