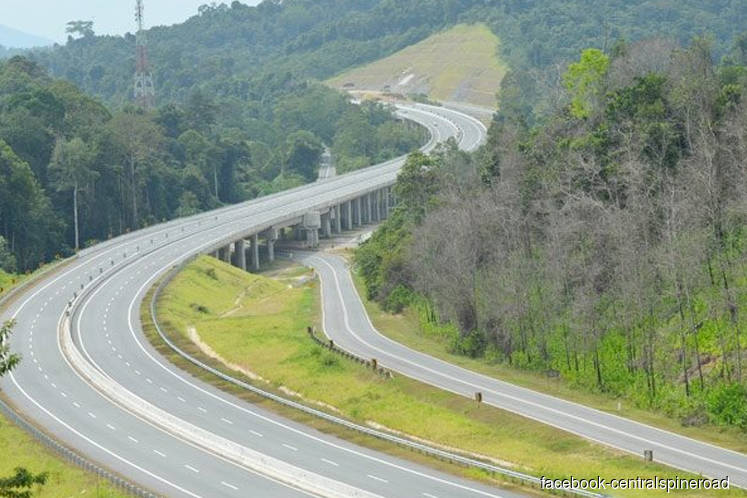 LAST week, about 200 companies with road construction capabilities gathered for a site visit as part of the tender process for Package 3 of the Central Spine Road linking Gua Musang in Kelantan to Kampung Relong in Pahang.

One of the interested parties, the managing director of a construction company and highway concessionaire, says two tenders were called last week and he was surprised by the large turnout. A quick check of the Ministry of Works’ website shows two tenders for part of the Central Spine Road — Package 3J, from Kampung Seberang Jelai to Kampung Relong; and the other under Section 3B and 3C from KM180.5 of FT08 to the Gua Musang roundabout.

“So many showed up. Maybe after the site visit, some will pull out, we do not know. It is likely to be very competitive,” another MD, this time of a large construction and property development company, says.

While details of the two tenders are still unclear, this stretch, Gua Musang to Kampung Relong is the longest of six phases, spanning 107km of the Central Spine Road.

A source says all the usual suspects had sent their representatives, including IJM Corp Bhd and Malaysian Resources Corp Bhd, with Ahmad Zaki Resources Bhd standing out as the largest East Coast construction player.

News of such projects being implemented should bode well for the construction industry. Over the past year the Bursa Malaysia Construction Index has shed more than 37% of its value and closed at 192.44 points last Thursday, as many large-scale projects have been axed or put on hold.

The Central Spine Road project will comprise six phases. Phase 1 is a 51km stretch from Kuala Krai to Jambatan Sungai Lakit in Kelantan. Phase 2 spans 63km from Jambatan Sungai Lakit to Gua Musang in Kelantan and Phase 3 covers 107km from Gua Musang to Kampung Relong in Pahang. Phase 4 comprises 56km from Kampung Relong to Raub in Pahang and Phase 5, sixty kilometres from Raub to Bentong. The final stretch, Phase 6, is 53km long and connects Bentong and Simpang Pelangai.

The MD of the construction and highway outfit says it is not easy to estimate the value of the two contracts that were called for tender as some portions of the Central Spine Road do not involve building a new road but refurbishing existing infrastructure.

Nevertheless the excitement is understandable, considering the dearth of construction jobs coupled with the large number of contracts that have been axed since May last year, when Pakatan Harapan won the general election.

In its entirety, the RM11 billion toll-free Central Spine Road project — which comes under the 11th Malaysia Plan/2016-2020 — is slated to span about 400km, connecting Pahang and Kota Baru, Kelantan.

On the mny participants, the MD of the construction and property development company quips, “Maybe it’s better to not participate in the tender, (maybe we have a) better chance to kena number (strike it lucky with number forecast operators).”

He adds that there is concern in the industry that some players, in their eagerness to get the jobs, will drop prices and hope to get variation orders and, in the worst case scenario, not be able to complete the jobs. He suggests that the government parcel out the jobs into smaller packages and differentiate them based on the size of the companies.

It worth noting that the contracts for the Central Spine Road come on the back of talk that the ECRL will be revived.

The ECRL, according to sources, may be scaled down from the gargantuan RM81 billion initially proposed. But then again, even the initial price for the railway line linking Gombak in Selangor to Kota Baru in Kelantan was a steep RM55 billion — and, some say, already marked up substantially.

Sources familiar with the ECRL negotiations say there could be some indication when Prime Minister Tun Dr Mahathir Mohamad visits China in April.

The media is already speculating that talks are back on after reports last month that the government had terminated the engineering, procurement, construction and commissioning (EPCC) contract awarded to China Communications Construction Co Ltd (CCCC).

CCCC was instructed to halt all construction works on July 3 last year, pending a review.

The ECRL also plays a role in China’s Belt and Road initiative, but the Mahathir administration is more cost-conscious than the free-spending Barisan Nasional government led by Datuk Seri Najib Razak.

The ECRL project was approved by the Cabinet in October 2016, and the EPCC agreement with CCCC was signed a month later.

“You must understand, we need the Chinese …  Just imagine if they stopped buying our CPO (crude palm oil),” the MD of the construction and property development outfit says. “We cannot afford to insult them, we have to at least give them some face.”