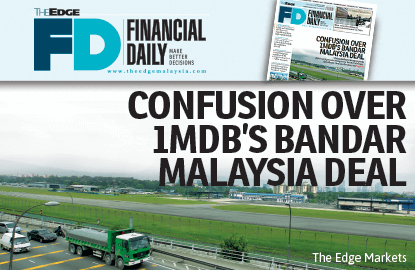 “On Dec 31, 2015, the joint venture (IWH-CREC Sdn Bhd) entered into the share sale agreement with 1MDB Real Estate Sdn Bhd (1MDBRE), pursuant to which the Joint Venture will purchase 60% of the equity interest in Bandar Malaysia held by 1MDBRE at a price of RM5.28 billion, among which CREC will pay RM2.64 billion of the share purchase price”, wrote CREC in its announcement to the stock exchange.

When contacted, 1MDB declined to respond. Meanwhile, CREC told The Edge Financial Daily that a mistake had been made by the head office in Beijing. China Railway is expected to make a clarification to the Hong Kong Stock Exchange but has yet to do so at press time.

Nonetheless, the mistake, however, does not appear to be straightforward.

For perspective, this would change the total gross valuation of the Bandar Malaysia land from RM12.35 billion to RM8.8 billion. So how did the massive difference arise?

For starters, it is important to note that the RM7.41 billion figure that was touted at the execution of the share sale and purchase agreement on new year’s eve, did not take into account the liabilities and encumbrances that would come with the land.

It is understood that the 486-acre Bandar Malaysia land deal, would come with strings attached — a RM2.4 billion sukuk, as well as the relocation of the Kuala Lumpur Air Force Base (PUKL) to a new site, which will cost RM2.7 billion. This includes the land acquisition and the construction of new bases.

Note that only an estimated RM1.6 billion of the Bandar Malaysia Sukuk has been drawn down, so the outstanding liability on 1MDB’s books could be less than the RM2.4 billion nominal value. Also, some money for the relocation of PUKL has already been spent, and the balance of work outstanding is estimated to be around RM1.9 billion.

The Chinese, in their announcement to the Hong Kong Stock Exchange, appear to have priced in these liabilities and encumbrances at RM3.55 billion. IWH-CREC’s 60% share of this figure works out to RM2.13 billion — the difference between the earlier RM7.41 billion number and the RM5.28 billion that CREC announced.

Hence, despite last week’s fanfare over the RM7.41 billion deal, it appears that 1MDB and the consortium still have lots of kinks in the deal to iron out. Mainly, how much liability and encumbrances that the consortium will assume.

In turn, this could determine how much cash the debt-ridden fund will be able to raise from the sale of Bandar Malaysia land.

Note that the exact amount of the liability, and how it will be transacted, is still being finalised.

For example, will the sukuk be settled outright, or will the consortium opt to take it over via its 60% stake in Bandar Malaysia?

Note that the sukuk holders will have to approve such a change in ownership of Bandar Malaysia. Lembaga Tabung Haji is understood to be the largest holder of the private sukuk with an estimated RM920.8 million exposure. The sukuk was supposed to finance the relocation of the air force base.

Speaking of this, will the consortium assume the responsibility of relocating PUKL, or will it simply pay 1MDB to handle the task?

These details were not made clear in 1MDB’s announcement last week. In fact, at the press conference, 1MDB president and group chief executive officer Arul Kanda Kandasamy told press that the details were still being worked out.

It remains to be seen how 1MDB and China Railway will clarify the huge differences in their respective transaction prices.