A condominium burdened by a prolonged legal battle 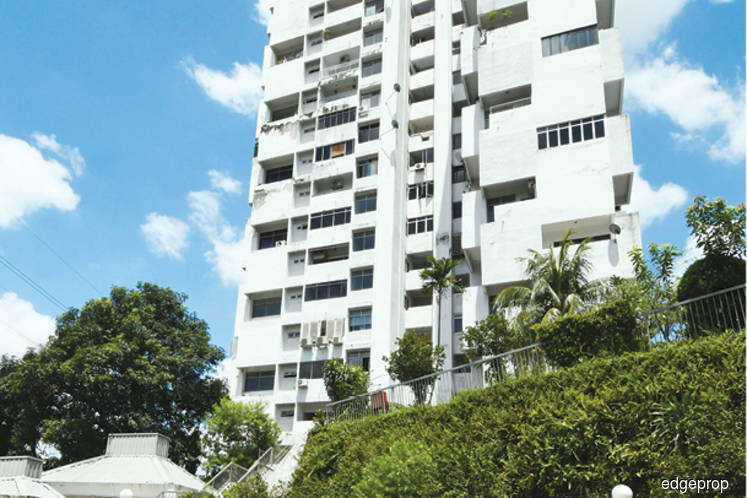 KUALA LUMPUR: Tucked away in the hills of Bukit Pantai, Kuala Lumpur lies one of the oldest condominiums in Kuala Lumpur. Pantai Towers was completed some 40 years ago as an exclusive, low-density project with only 56 units. The 2.11-acre freehold project has facilities such as a swimming pool and a tennis court.

Many who reside in the vicinity may have passed this building often but little do they know that the condo unit owners have been embattled in a legal dispute over outstanding maintenance fees for over a decade.

The dispute between Pantai Towers Management Corporation (MC) and the owners of 30 of the Pantai Towers units including four penthouses, began in 2007.

According to the law firm representing the MC, Messrs Cheah Teh & Su partner Peter Justin Skelchy, the developer that built Pantai Towers in the 1980s was Metroplex Bhd, whose executive chairman was Lim Siew Kim, daughter of the late Tan Sri Lim Goh Tong of the Genting Group. The company kept 26 units for itself and later bought back another four units from individual owners in 1998.

Metroplex leased out the units, mainly to staff of the nearby Pantai Hospital, until sometime around 2008, after which the units were left vacant. Since October 2007, the company had defaulted on the maintenance fees of the units which led the MC to file a suit against Metroplex in the Kuala Lumpur Sessions Court in August 2008 for the sum of RM159,146.23, being the outstanding maintenance fees owed by the company from October 2007 to September 2008, according to Skelchy.

Judgment was obtained in favour of the MC in October 2009, but before the payment was received, Metroplex went into liquidation in August 2012.

Hence, in December 2012, the MC filed its Proof of Debt (POD) with the liquidator of Metroplex for the sum of RM931,786.39 (which includes the earlier outstanding sum of RM159,146.23) which consisted of maintenance fees for the 30 units owned by Metroplex from October 2007 till September 2012.

However, before the MC was able to retrieve the outstanding amount, the 30 units were sold to Brightvite Sdn Bhd and Benchmark Link Sdn Bhd, says Skelchy.

He claims that Brightvite acquired five units from Metroplex in June 2012, prior to the winding-up of the latter in August 2012. The remaining 25 units, on the other hand, were sold to Benchmark Link by the liquidator after the winding up, as approved by an order of the High Court in May 2013, according to an asset sale agreement sighted by EdgeProp.my.

A search on the Companies Commission of Malaysia’s website reveals that the companies are 99% owned by Lim.

In November 2014, the MC commenced an action at the High Court against Brightvite and Benchmark Link for the recovery of some RM1.08 million in maintenance fees accrued from October 2008 to December 2014.

Eventually, in January 2016, the High Court held that the provisions of the Strata Titles Act 1985 allowed the MC to recover outstanding maintenance fees from a proprietor, a successor-in-title or a purchaser to be duly registered as a proprietor.

Following this, the Pantai Towers MC has retrieved the outstanding amount of slightly more than RM1 million.

But the dispute is far from over.  There is still the outstanding amount of RM159,146.23 owed by Metroplex from October 2007 to September 2008 as it is part of the POD, which has yet to be admitted and confirmed. Meanwhile, Brightvite and Benchmark Link will be filing an application at the Federal Court to overturn the decision by the Court of Appeal. The two companies filed a notice of motion in July 2018 and the hearing date for the application for leave to appeal at the Federal Court is fixed on Nov 14, 2018, says Skelchy.

In an interesting development, the 26 individual owners of the remaining condo units have, in October 2017, received an offer to purchase their units from a company called Embition Sdn Bhd.

“Embition had offered through a letter to all the 26 individual owners in Pantai Towers directly to buy their units for RM800,000 per unit,” said R. Nageswaren, one of the condo’s residents and  the property manager for the building.

However, the proposed acquisition was not successful as some of the owners deem the offer to be too far below the market price at the time, which was about RM1 million, he adds.

According to a redevelopment plan sighted by EdgeProp.my,

which was attached with the letter, the company is planning to build four blocks of 27-storey buildings on the site. It is believed that the redevelopment will not only involve Pantai Towers but also the adjacent 10-unit Pantai Hill Apartments, which was originally owned by Metroplex before it was sold to Benchmark Link together with the 25 units in Pantai Towers in 2013.

Attempts to get comments from Brightvite and Benchmark Link through their lawyer Malcolm Fernandez of C Sukumaran & Co have been unsuccessful. Fernandez did not respond to EdgeProp.my’s request for comments either.

This story first appeared in the EdgeProp.my pullout on Sept 7, 2018. You can access back issues here.