Commodities on a rebound 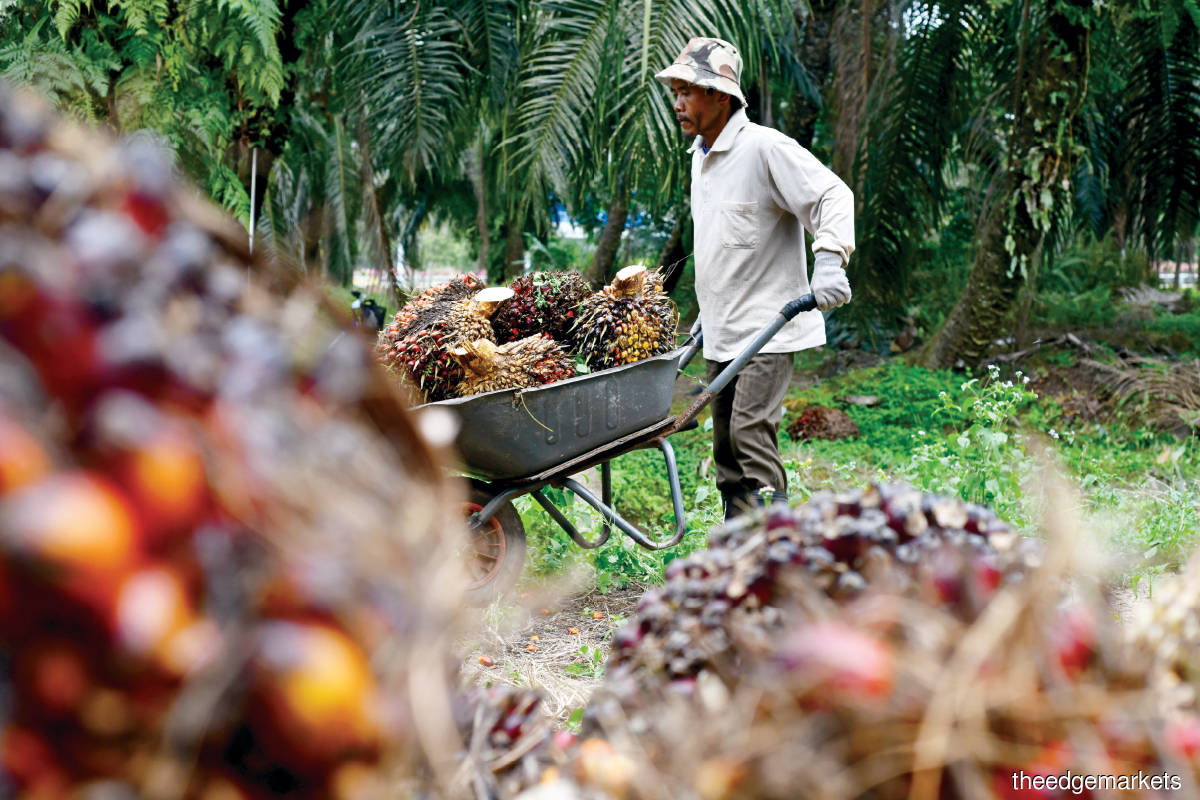 CPO prices continue to be resilient amid the pandemic. (Photo by Suhaimi Yusuf/The Edge)

COMMODITIES started off the year with a bang as the Bloomberg Commodity (BCom) Index, which tracks the prices of 23 raw materials, reached new highs since 2011 and touched 97.51 points on July 29.

On Aug 20, however, the index slumped 7% to 91.16 points, on anticipation of slower economic growth amid expectations of a reduction of asset purchases by the US Federal Reserve. It has since made up some lost ground, closing at 95.79 points last Tuesday, as prices of heavyweight commodities that make up the index, such as oil and gold, picked up steam.

“Commodity prices have continued to climb during the past three months, but while the rally during the first part of 2021 was synchronised across all sectors, we are now seeing some sectors sticking out relative to others,” Saxo Bank head of commodity strategy Ole Sloth Hansen tells The Edge.

Here, we take a look at the performance of some of these commodities over the past three months. In a Sept 7 note, he says: “While the timing of the Fed taper may have been delayed by the recent weakness in data, leading [to] the prospect of zero US growth in the third quarter, gold has for several reasons so far failed to capitalise on this emerging tailwind. First, the continued strength in global stocks reduces the need for diversification and, second, the dollar has yet to break support.

Still, Hansen says gold prices could reach US$2,000 per ounce before year-end, premised on buying from key physical markets as well as support from the European Central Bank (ECB).

“With money managers mostly absent on the buy side in recent months, buying has instead been seen from key physical markets such as India and China, together with robust interest from retail consumers snapping up coins from the US Mint and Perth Mint at the fastest pace in years. That is perhaps a sign that retail investors in some parts of the world that are being charged negative interest on their bank accounts have chosen gold as a hedge against rising inflation and inflation fears.

“Investors are likely to focus on Thursday’s ECB meeting, and the rising chance that the bank may hit the taper button before the Fed. If it happens and EU bond yields jump, it may support some additional gold-friendly dollar weakness against the euro, while further raising the prospects of the Fed potentially acting sooner as well,” he says.

OCBC Bank economist Howie Lee concurs, and sees gold prices “possibly finding a top” at US$1,900 per ounce in the near term, owing to the twin factors of weakening economic fundamentals and continued accommodative monetary policy.

“In 2022, however, when the Fed tapering process is in full swing, we expect gold to eventually head towards its steady-state price of US$1,500,” Lee says.

The prices of two commodities vital to the Malaysian economy — Brent crude oil and crude palm oil (CPO) — continued to display resilience amid the pandemic. Brent crude oil prices have increased 39% year to date, to US$72 per barrel last Monday. Compared with three months ago, the price of the energy commodity has inched up by a marginal 1%.

Saxo Bank’s Hansen says Brent crude oil has settled into a wide mid-US$60 to mid-US$70 range, with continued demand concerns related to the Covid-19 pandemic offset by Opec+ keeping a lid on production increases to ensure that the market remains balanced but not oversupplied.

“We maintain a positive outlook for crude oil in the belief that global consumption will continue to recover and Opec+ will continue to actively manage supply to support prices. Key risks to this assumption is a renewed surge in Covid-19 cases and a stronger-than-expected recovery in non-Opec+ production, especially from US shale producers that have shown a great deal of discipline by turning their focus to profitability instead of the previous pump-baby-pump attitude.

“Provided we see no major surprise from these two, I see Brent making an attempt to reach US$80 per barrel before year-end, before settling into a US$70-to-US$80 per barrel range in 2022,” says Hansen.

AmInvestment Bank in a Sept 7 note says it is maintaining its forecasts for oil prices in 2021/22 at US$65 to US$70 per barrel. The firm has an “overweight” call on the Malaysian oil and gas sector, with Dialog Group Bhd and Sapura Energy Bhd among its top picks.

Prices of CPO futures contract have shot up 8% in the past three months, from RM4,123 per tonne on June 8 to RM4,435 per tonne last Monday.

Singapore-based independent online publisher of palm oil market news Palm Oil Analytics owner and co-founder Dr Sathia Varqa says CPO prices, which had eased in July after hitting an all-time high of RM4,524 per tonne in May, have started to trend higher again in August.

“This was mainly on external support of firm soybean oil prices and a lower annual palm production outlook. CPO prices are highly volatile this year, dragged higher by weak supply and a sporadic rise in export demand,” he adds.

Sathia expects CPO futures to remain above RM4,000 per tonne until year-end, driven by the rebound in September exports and relatively better export pricing compared with main competitor Indonesia, which hiked its export levy on September shipments.

In a Sept 7 outlook on the plantation sector, Hong Leong Investment Bank Research (HLIB Research) says the share price of plantation companies, which are represented by the Bursa Malaysia plantations index, still lags behind the rally in CPO prices, owing to lingering environmental, social and governance (ESG) concerns within the sector, and doubts over the sustainability of CPO prices.

“We believe the concerns on ESG issues have already been reflected in the sector’s valuations, as most players — particularly the large ones — have been putting efforts into rectifying these ESG issues,” the firm says, noting that multi-year low levels of foreign shareholdings in these companies also underscore the concerns.

“While we maintain the view that current high CPO prices will not [be sustained] over the longer term, we upgrade the sector to ‘overweight’, as we believe a rerating is warranted on the sector’s palatable valuations and good near-term earnings prospects arising from elevated CPO prices,” the firm says.

Prices of copper and iron ore, which rallied strongly at the start of the year, have hit a snag over the past three months.

“Iron ore has suffered because of China’s intervention in its steel industry, while copper has been trading mostly sideways, with China destocking and slowing growth, raising some concerns over the demand outlook from the world’s biggest consumer,” says Hansen.

The outlook for prices of both metals is highly dependent on the world’s second-largest economy.

“China’s demand for metals has weakened in the past three to four months. There have been attempts to curb pollution and limit investor speculation by the Chinese authorities, resulting in a drop in import demand and, consequently, industrial output,” says OCBC’s Lee.

“But the latest Chinese trade data in August showed a moderate rebound in commodity import, which suggests China is likely to continue to keep commodity prices supported as it tries to balance economic growth with other aims.”

Tin prices have not had such issues, and year to date had surged 62% to US$33,145 per tonne as at last Monday.

According to an article published by the International Tin Association last month, markets outside China experienced rapid price rises in July because of significant supply challenges.

In a Sept 7 note on MSC, Kenanga Research says tin demand will continue to rise, in view of the elevated demand in electronics, which consumes tin, while demand for tin metal compound in lithium-ion batteries will grow stronger as more electric vehicles are introduced.

Prices of soft commodities such as coffee and wheat have been on an uptrend in the past three months, boosted by adverse weather developments.

According to Rabobank’s Agri Commodity Markets Research report published last month, the growth of net imports of coffee into non-producing countries has increased because of demand from the US and Japan, while the EU is still in the red, which is not surprising, given the length of the lockdowns.

“We do expect to see improving numbers in the third and fourth quarters as the out-of-home sector reopens more and there is more foot traffic in city centres and offices. As current prices are 50% above the five-year average, some cost pass-through is likely. This is especially so when it comes to large packets of coffee on supermarket shelves, where the price of the beans could represent up to 50% of the final price,” the firm says.

Meanwhile, the price of wheat has increased 6% in the past three months to US$7.26 per bushel on Sept 3, from US$6.88 on June 4. However, restocking for wheat crops may be more limited than expected in certain parts of the world, owing to the La Niña weather phenomenon, says Rabobank.

“Although Australia is expected to have another very good year, concerns are rising for Brazil and Argentina, where a potential La Niña could exacerbate drought conditions,” the firm says.