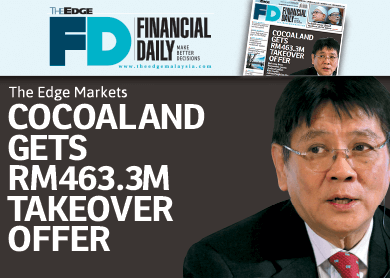 KUALA LUMPUR: Snacks and candy maker Cocoaland Holdings Bhd has received an offer from Hong Kong-listed First Pacific Co Ltd to take over its business for a total consideration of RM463.32 million or RM2.70 per share.

The takeover offer came on the heels of the group’s recent rejection of Navis Asia VII Management Co Ltd’s offer at RM2.20 per share.

In a filing with Bursa Malaysia, Cocoaland said it received an indicative non-binding proposal dated May 29 from First Pacific, which detailed that the proposed takeover of all its assets and liabilities, will be undertaken by a special purpose vehicle (SPV).

Cocoaland executive director and substantial shareholder Liew Fook Meng, who owns shareholdings in Leverage Success Sdn Bhd, a substantial shareholder of Cocoaland, will acquire an equity stake in the proposed SPV to be agreed upon by First Pacific and Liew, the statement said. The new offer comes after  Navis Asia had, on May 22, offered RM377.52 million or RM2.20 per share to buyout Cocoaland’s operation, which its board had unanimously rejected.

On April 3, the company revealed that major shareholder Leverage Success was in preliminary discussions with Swedish private equity group EQT Partners for various investment possibilities in Cocoaland. These investment possibilities include, but are not limited to, the acquisition of a majority or controlling interest, takeover or acquisition of the entire part of the group’s business operation, according to Cocoaland. However, there has been no updates on the discussions since.

First Pacific is led by Anthoni Salim as chairman. The tycoon is president and chief executive officer of Indonesia’s biggest conglomerate Salim Group. As at March 24, First Pacific owns a 50.1% stake in PT Indofood Sukses Makmur Tbk, one of the world’s largest manufacturers by volume of wheat-based instant noodles.

Trading in Cocoaland’s shares was suspended from Monday. The stock will resume trading at 9am today.