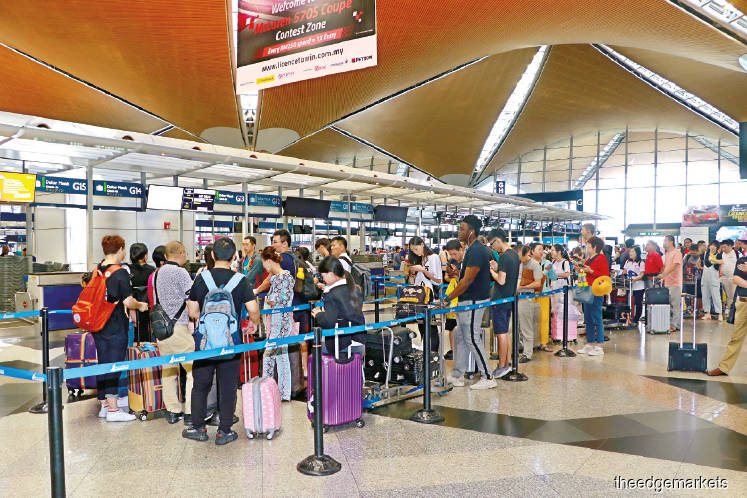 KUALA LUMPUR: Malaysia Airports Holdings Bhd (MAHB) saw 6.6% more passengers passing through 39 airports it manages in the country in January, despite initial reactions to the Wuhan virus outbreak. The better showing was due to the Chinese New Year (CNY) festive season.

The airport operator handled 8.93 million passengers in January, compared with 8.37 million in the same period in 2019. International and domestic sectors recorded 4.7 million and 4.3 million passenger movements, up 4.7% and 8.9% respectively over the same month last year.

However, the overall average load factor fell 2.4 percentage points to 71% in January 2019, partly due to ongoing sentiments concerning the virus.

With the virus outbreak, MAHB expects a negative impact on air travel, at least in the short term. “A sharp decrease was already seen on the last day of January,” the group said.

MAHB said however, the current traffic dynamics in volume and structure are different from those seen during the severe acute respiratory syndrome (SARS) pandemic in 2003.

“The Wuhan virus’ impact may not be the same as SARS’. SARS resulted in a 7.2% decline in international passenger traffic but domestic traffic increased 6.5%, resulting in an overall 1% growth. SARS resulted in six months year-on-year decreases in passenger movements.

“While the [Wuhan virus’] immediate impact on air travel could be worse due to a wider contagion, the recovery could be quicker compared with that in the past due to technology and effectiveness in handling the impact.

“Passenger traffic is expected to pick up once the confidence for travel develops as soon as the outbreak is contained.”

It believes the 2020 Visit Malaysia Year campaign may also help to mitigate the virus’ negative impact, assuming confidence in air travel returns within the next few months.

“Most of the regions registered growth except Europe, Northeast Asia and North America in January 2020. Countries with double-digit growth include Japan, Qatar, Saudi Arabia, Jordan, Singapore, South Korea and Brunei.

“All airports in Malaysia, other than [those in] Sabah with short runways, registered an increase in passenger traffic. Forty-five airlines recorded growth, with 32 airlines registering double-digit increases in international passenger movements in January 2020,” said MAHB.

System-wide, including its Istanbul operations in Turkey, MAHB handled 6.5% more passengers at 11.89 million in January 2020, compared with 11.17 million in the same month last year.

MAHB attributed the softening domestic passenger movements to Pegasus Airlines’ route restructuring, in a bid to expand its international routes due to the international segment’s higher yields.

“Istanbul SGIA’s growth was more focused on international routes in 2019 and it continued to January 2020, up 6.1%. There is enough seat capacity for Istanbul SGIA for 2020 to continue its growth trajectory with the current schedule and by improving airlines’ load factors,” it said.