Climate politics and the Volkswagen scandal 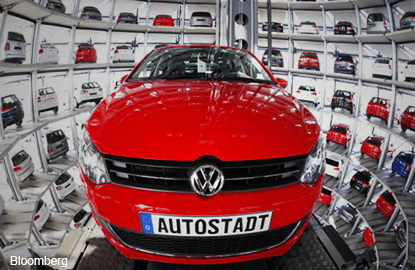 THE Volkswagen scandal is an embarrassment of riches. Seen in isolation, it’s staggering enough — that a huge and well-respected company with a valuable reputation to protect should cheat its customers on this scale, be found out, see its value shed US$22 billion (RM96.6 billion), and face enormous fines and damages. But there are several scandals here, and the remarkable malfeasance of VW’s managers is only one of them.

The full dimensions of a second scandal aren’t yet clear — how far German and other European regulators were incompetent, or actually complicit, in allowing this to happen; and, relatedly, whether other companies have been doing what VW was doing. Much more remains to be learned about this.

What did Europe’s regulators know and when did they know it? Attention has centred on VW’s use of a “defeat device,” as though that’s the crime. In fact, regulators know that engine management systems need to be switched to a different mode when cars are being tested: That’s necessary to get accurate results. (Anti-skid systems, among others, must be disabled when the testing equipment has the drive wheels turning and the others stationary.) The issue is not the deployment of defeat devices, but the settings they switch to when activated.

Regulators presumably understand that some supervision of those test-mode settings is necessary. What form did this take? Was it so lax that it constituted a tacit invitation to cheat? And if it did invite cheating, how did other companies respond to the invitation?

The answers to these questions will be interesting. VW’s prospects for recovery turn on them: Was it an outlaw by the standards of its industry, or just one cheat among many while regulators looked away?

A third scandal, even more costly than the first two, also needs to be noticed and examined. It concerns the economic and environmental policies that first set European car manufacturers and consumers on course to this pile-up.

Remember that “clean diesel” was a government-led initiative, brought to you courtesy of Europe’s taxpayers. And, by the way, the policy had proved a massively expensive failure on its own terms even before the VW scandal broke.

It’s this scandal that teaches the most important lessons. Beginning in the mid-1990s, mindful of their commitments to cut carbon emissions, Europe’s governments embarked on a prolonged drive to convert their car fleet from gasoline to diesel.

With generous use of tax preferences, they succeeded. In the European Union as a whole, diesel vehicles now account for more than half of the market. In France, the first country to cross that threshold, diesel now accounts for roughly 80% of motor-fuel consumption.

What was the reasoning? Diesel contains more carbon than gasoline, but diesel engines burn less fuel: Net, switching to diesel ought to give you lower emissions of greenhouse gases.

However, there’s a penalty in higher emissions of other pollutants, including particulates and nitrogen oxides, or NOx. Curbing those emissions requires expensive modifications to cars’ exhaust systems.

To facilitate the switch, Europe made its emission standards for these other pollutants less stringent for diesel engines than for gasoline engines. The priority, after all, was to cut greenhouse gases.

Except that the switch to diesel probably didn’t cut greenhouse gases. Making diesel cheaper by taxing it at a preferential rate encouraged people to drive more.

And emissions of greenhouse gases higher up the fuel-supply chain are worse for diesel than for gasoline. (Increasing demand for diesel drew in more supplies from Russia; producing and moving those supplies caused more emissions.) Treating diesel to lower its sulphur content adds yet another carbon penalty.

At best, the clean-diesel strategy lowered carbon emissions much less than hoped, and at ridiculous cost; at worst, as one study concludes, the policy added to global warming.

Europe’s carmakers, flying the banner of environmental virtue, committed themselves to the strategy — and none more so than VW, which even attempted to bring it to the US. That, one might conclude, was its biggest mistake: US regulators aren’t so understanding, and its government hasn’t bet the industry on diesel.

Europe, meanwhile, has an economically and environmentally misaligned car industry; a reputational crisis of unsurpassed scale centred on its biggest manufacturer; a NOx-induced public-health emergency in many of its cities; and quite possibly less than nothing to show for the effort when it comes to climate change.

VW may have perpetrated one of the biggest frauds in corporate history. Europe’s clean-diesel strategy, which set the scene for that fraud, may be the most expensive mistake in the history of environmental policy. As I say, an embarrassment of riches. — Bloomberg View