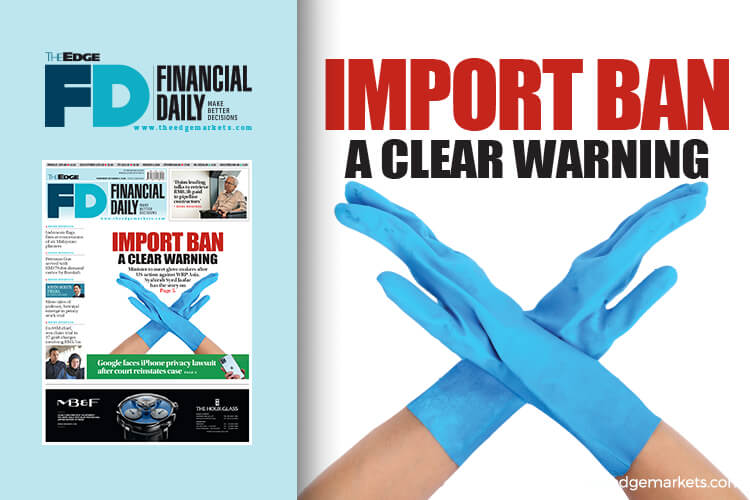 KUALA LUMPUR: Human Resources Minister M Kulasegaran will meet with all rubber glove makers tomorrow to explain the repercussions of forced labour in their operations after the US banned the import of disposable rubber gloves of WRP Asia Pacific Sdn Bhd.

The Malaysian company has been issued a withhold release order (WRO) banning it from exporting disposable rubber gloves to the US because of its use of forced labour, the US Customs and Border Protection (CBP) said in a statement yesterday.

CBP’s statement did not mention any other Malaysian glove maker other than WRP Asia, but the enforcement agency’s actions appear to have woken up the sector to a potential ban of companies falling foul of international labour standards.

“It has to be highlighted again, that only one Malaysian glove producer has been banned and not the whole rubber glove sector,” Kula said in a statement.

He also plans to meet US embassy officials here to explain that action has been taken against WRP Asia, which at the time of writing, had yet to issue a statement on CBP’s allegations.

Kula said WRP was taken to court by his ministry in February, and in May the company pleaded guilty and was fined. “The ministry is committed to educating the public on the adverse effects of forced labour. The ministry also advocates the enhancement of worker rights and has taken various steps accordingly.”

CBP said WPR Asia is one of five companies that were issued the release order due to suspected use of forced labour in its manufactured products. In its statement, the US enforcement agency said the action was based on information obtained and reviewed by CBP that indicates that the products are produced, in whole or in part, using forced labour.

“The Forced Labor Division within CBP’s Office of Trade leads agency enforcement efforts prohibiting the importation of goods made using forced labour. CBP receives allegations of forced labour from a variety of sources, including from the general public.

“Under US law, it is illegal to import goods into the US that are made wholly or in part by forced labour, which includes convict labour, indentured labour, and forced or indentured child labour. When sufficient information is available, CBP may detain goods believed to have been produced with forced labour by issuing a WRO. Importers have the opportunity to either re-export the detained shipments at any time or to submit information to CBP demonstrating that the goods are not in violation.”

“Margma would like to keep the public informed that our members take great concern on the welfare of their workers. The industry has since last year worked on social compliance initiatives in order to continuously improve the welfare of the employees in the rubber glove industry,” Margma said.

In its statement, the Malaysian Rubber Export Promotion Council (MREPC) said it has started to conduct a study to better gauge the ability of rubber product manufacturers to meet social compliance standards, and has drawn up and implemented a series of programmes to educate, encourage and assist companies in the rubber products industry on social responsibilities and ethical practices.

WRP, which describes itself as a world leading manufacturer and exporter of premium quality glove products, is based in Bandar Baru Salak Tinggi in Sepang.

In late January, after some 2,000 Nepali workers went on strike, an investigation found the company had committed labour offences including not paying workers’ wages for three months, not paying overtime, and unfair pay cuts, the Malay Mail portal reported.