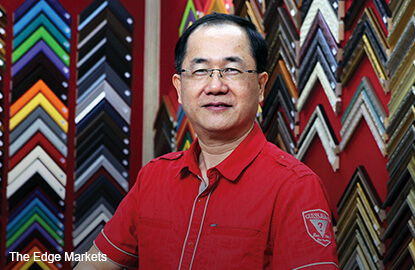 That sets its capex or capital expenditure for the current financial year ending Dec 31, 2017 (FY17) at RM3 million, according to Classic Scenic managing director Samuel Lim.

Of that, RM2 million will be spent on facilitating the automation of its production, while another half a million on Phase 2 of its enterprise resource planning system will be spent to minimise machine time-offs and monitor production planning via the provision of real-time information.

“Some of the capex will be allocated for the construction of another warehouse of about 30,000 sq ft (2,787 sq m), which is expected to be completed by the first half of 2017 [1H17],” Samuel said in a recent interview with The Edge Financial Daily.

The group, which has been posting high double-digit growth in its bottom line of late, is also aiming to keep the growth momentum going in FY17.

For some perspective, its net profit for the first nine months ended Sept 30, 2016 (9MFY16) grew 59% year-on-year to RM11 million from RM6.92 million. This sets the group up for a better year ahead, as its year-to-date earnings have already reached some 96% of its entire FY15 net profit.

While the results for its fourth quarter ended Dec 31, 2016 (4QFY16) will only be released this week, it should be noted that merely another RM1.5 million more in net profit would give it another double-digit annual bottom line growth — its third in a row.

Only in two quarters — specifically 1QFY09 and 1QFY08 — did the company record a net profit of less than RM1.5 million since transferring its listing to the Main Board of Bursa Malaysia in 2006. The company has been consistently in the black since its market debut.

Samuel said the group’s capex hike stems from its optimism for the year ahead, as it has already achieved an 8% rise in production volume in the first quarter, even though it’s not traditionally as busy a period as the second and third quarters tend to be.

“Profitability could be driven by higher sales and favourable exchange gain. Year-to-date FY16 earnings would have been better if not for some unrealised foreign exchange (forex) loss recorded.

“If the ringgit stabilises this year, as some economists forecast, we would see a lower unrealised forex loss and maybe even see a reversal,” Samuel said. The forex loss was a result of its hedging policy, which it adopted as it sells its products in US dollars.

On pressure from rising costs due to rising commodity prices, Samuel said Classic Scenic has taken proactive measures to address some of these concerns, including keeping a high level of inventory for timber, together with its planned capex spend to intensify automation.

“In fact, [our current] timber [inventory] can sustain us for about 12 months [ahead] and thus, the effect of [further] increases in timber prices will be mitigated and gradual,” he said.

He added that the increase in costs would also affect other players in the industry and so the group will have room to pass on such increases to its customers. The group’s high level of inventory also allows more time for any pricing adjustments.

A brief look at its latest quarterly financials showed that though the company is planning a sixfold spike in capex spend in FY17, Classic Scenic’s cash position remains healthy. As of Sept 30, 2016, its net cash position stood at RM28.7 million or 23.9 sen per share.

This means the group has enough in its coffers to maintain its current dividend payout, which translates into a yield of about 6.4%, based on its stock’s closing price of RM1.92 last Friday. The stock has gained nearly 69% in the past 12 months.

At present, the group is the leading player in the finished moulding industry, which deals with the manufacturing of purely wooden picture-frame length mouldings. Its finished moulding exports make up 43% of Malaysia’s total export of the same for 1H16. This also marks a substantial increase in market share from the 37% it contributed as at December 2015.

The group is not worried by the wave of isolationism sweeping across some countries, particularly the US, as it believes that any import duties that may be imposed on Malaysia would likely be similarly imposed on other finished moulding exporting countries.

“Larger trading nations like China and Mexico are more likely to feel the brunt from Trump’s policy. So far, nothing has been mentioned about Malaysia. Any duty on other nations like Malaysia is likely to be done fairly and across the board, which includes competing nations like Indonesia,” said Classic Scenic executive director Simon Lim, the elder brother of Samuel.

Simon is also of the view that any disadvantage China may face in terms of tax would potentially provide an opportunity for Classic Scenic to gain more market share in the US.

Currently, China controls about 17% of global market share versus Malaysia’s 15%.

Classic Scenic’s primary export market is the US, with about 77% of its customers based there, followed by 9% from Australia, 5% each from Asia and Europe, and 3% from Canada.

Classic Scenic enjoys long-standing relationships with most of its customers, with the average customer having spent at least 13 years with the group.

Its shares’ last traded price gives it a market capitalisation of RM225 million.