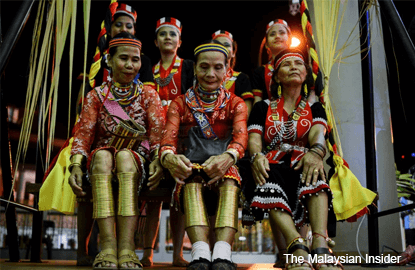 (Nov 27): Sarawak's recent decision to make English the state's second official language drew criticism from the peninsula, but the state is in fact merely claiming one of its special autonomy rights granted to it during the formation of Malaysia.

The state's founding fathers had a list of demands before they agreed to join the Federation of Malaysia in 1963, and they wanted these recorded in writing.

The special clauses were written into Sarawak's 18-point Agreement and were also inserted into the Federal Constitution to protect the state's interests in language, land, civil service, local government and immigrations, among others.

One of Sarawak's founding fathers, Datuk Amar James Wong, who later wrote a book on Sarawak's path to forming Malaysia, "The Birth of Malaysia", said there was "agreement among many (racial) groups that English should be retained either indefinitely or at least for another 15 years as the official language, not only in Sarawak, but in the new federation as well".

Language is the second point in the 18-point agreement, specifically on the status of English. Malay is recognised as the language of the federation, and English "should continue to be used for a period of 10 years after Malaysia Day".

The back story to this clause was a meeting of 51 elected Iban native chiefs in Kapit on February 15, 1962 to discuss proposals for the Federation of Malaysia, as part of the Cobbold Commission which determined public opinion in Sabah (then called North Borneo) and Sarawak on their proposed union with Malaya, Brunei and Singapore.

After 10 years in the federation, Sarawak did not to drop or make changes to the status of the English language.

Neither did the state adopt the National Language Act 1967 which would have made Bahasa Malaysia the official language.

This was reiterated by Datuk Amar Abang Johari Tun Openg, Sarawak's housing minister, in his defence of Chief Minister Tan Sri Adenan Satem who was slammed by Malay groups for his stance on the English language.

Today, lawmakers mostly use English in state assembly debates, as are lawyers and judges in the courts.

Unlike the peninsula, Sarawak ministers frequently deliver speeches at public functions in English, especially in urban areas where the language is widely spoken.

Rais has been heavily criticised by Sarawakians for his remarks, in tones that reveal the resentment building up over the years over poverty, rural neglect and dominance of peninsula-centric policies.

The move to make English an official language of the state has even united political foes, with Sarawak PKR chairman Baru Bian throwing support behind Adenan.

Hitting out at Rais, Baru said ties between Sarawak and the peninsula were frayed due to Putrajaya's failure to heed the needs of the state.

The opposition MP said Rais would only need to look at the auditor-general's latest report to see the poor state of schools in Sarawak.

“We are also lacking in medical and health services and other basic amenities. This is what is causing the disintegration," Baru said.

To claims that English as a state language is an insult to the constitution, DAP's Kuching MP Chong Chieng Jen said that Article 161(1) and (2) cemented English as the official language of Sarawak, and "there should be no restriction for the use of English for all official purposes in Sarawak".

The right to speak English in Parliament by a lawmaker from Sarawak or Sabah, in the courts and state assemblies of both states, is clearly stated, said Chong, who is also Sarawak DAP chairman.

He said this was the case unless there was a law specifically taking away the status of English as the official language of Sarawak.

“And so far there is no such law.”

Chong created a stir in Parliament recently when he debated the 2016 Budget in English, stressing the right of Sarawak and Sabah MPs to use the language in the Dewan Rakyat.

A BN MP from the peninsula, Datuk Seri Ismail Sabri Yaakob said Chong had acted unconstitutionally, while the minister in charge of Parliament, Datuk Seri Azalina Othman Said, said using a language other than Bahasa Malaysia during debates must get the speaker's permission.

The debate over language in Malaysia is so often political in nature, said Universiti Malaysia Sarawak social scientist Dr Andrew Aeria, adding that it was only a matter of practicality that the use of English be encouraged.

“(We) are already left behind in the whole world because we don't master English anymore. Nearly everybody in Malaysia is fluent in Malay, especially the younger generation, but they are not fluent in English.

“And English is a required language in global trade," he said, adding that Malaysians were not only dealing with Malay-speaking Indonesia and Brunei.

"Given that Bahasa Malaysia is a fluently mastered and spoken language in Malaysia, the Malay groups have no cause to be jumping up and down." – The Malaysian Insider