THE Arkadiko Bridge, one of the world’s oldest bridges, dates back to Greece’s Bronze Age and was built for the use of chariots between the two cities of Tiryns and Epidaurus in the Peloponnese region. 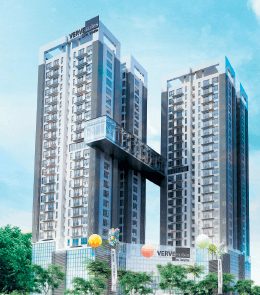 As a symbol of connection and progress of the two cities, allowing both to prosper, the bridge became the source of inspiration for the double-volume Vercadicos Sky Bridge at the Verve Suites KL South development, a residential refurbishment project in Jalan Klang Lama by Bukit Kiara Properties Sdn Bhd.

Group managing director of Bukit Kiara Properties Datuk NK Tong explains that as the development is located along Jalan Klang Lama, which connects Kuala Lumpur with Petaling Jaya and has made the areas vibrant, a bridge comes to mind.

“It connects the two towers and it is where people can meet, network and interact. It is a bridge that will connect people to a whole new world of opportunities.”

“While you have a compact unit, you also have the biggest living room in Old Klang Road,” quips Tong.

The 10,000 sq ft Vercadicos Sky Bridge, which links the two residential towers 14 storeys above ground, aims to be the living space for residents of the Verve Suites KL South development — what the company calls the Vercadicos Living Concept.

The concept is such that one can imagine the residential suite as a bedroom with the rest of the building as a giant living room.

Measuring 200ft in length, 20ft in height and 26ft in width, the bridge is constructed of 145 tonnes of steel and is fully glass-encased.

The chill zone and bridge lounge can be reserved by residents to host private functions while the facilities at the sky kitchen and sky diner can be utilised to host receptions and events.

With the first tower currently 40% taken up, Bukit Kiara Properties is opening the sky bridge for preview on March 8, 21 and 22.

The built-up of the one-bedroom suite is 555 sq ft, and of the two-bedroom suite, 704 sq ft, 729 sq ft and 876 sq ft. With eight units to a floor, there are four fully furnished units to choose from. Each type comes with its individual interior design and fittings.

Using the analogy of hotel rooms, Tong believes that unit sizes may not make much of a difference but rather how the units are furnished. He also notes that the reality is that furnishing compact units remains challenging, especially if left to individual homeowners.

“We have decided to set a standard design for the whole project to protect the value of investment for homeowners and to have a consistent branding.”

“From our Mont’Kiara experience, we find that it is easier to manage a development if we set a higher standard as we attract homeowners and tenants that have high expectations and are willing to pay for it,” Tong says.

“What we do with the Verve Suites brand is to create a different lifestyle, and apart from the facilities we offer, the difference is really in the way we put it together and manage it, even after the keys have been handed over.”

He adds that the community the brand aims to create includes those who are young at heart, and enjoy an active lifestyle and meeting other people.

“Just like the community we have created in Mont’Kiara that actively interacts with us, I think it is also timely to bring it to Old Klang Road,” he says.

The development is located at the intersection of Jalan Klang Lama and Jalan Kuchai Lama. It is accessible via various networks of interlocking highways such as the Federal Highway, New Pantai Expressway, East-West Link Expressway, KL-Putrajaya Highway, Salak Expressway and KL-Seremban Highway.

A stone’s throw away are shopping malls such as the Mid Valley Megamall and The Gardens Mall, as well as private colleges and universities, among others.

The development has achieved a Green Mark Certification from the Building and Construction Authority of Singapore and the first tower is targeted for completion by mid-2016 followed by the second six to nine months after that.

On challenges and market

Tong notes that the main challenge was changing people’s perception about the old building. However, he remains positive about the development and its location and says the group will continue doing what is right for its customers.

“People are expecting more, not just a roof over their heads but also the lifestyle, facilities and management a development brings.

“There has been a lot of growth in Old Klang Road over the past few years. This area is being transformed and will continue to be transformed, including a monorail extension that is proposed to go down this road from KL Sentral and Mid Valley, as well as the River of Life project to rejuvenate the river.”

According to iProp Realty managing director Victor Lim, the development’s selling prices are on the high side and there are many options available along Jalan Klang Lama. However, he notes that a lot depends on the quality of the development.

“There would also be those who may find the development’s location slightly inconvenient as it is at a T-junction. However, developments near the city centre are still good, and the Old Klang Road area in general is still in demand,” Lim adds.

While noting that the general economy poses a bigger challenge to developments and house prices are becoming more unaffordable, Tong believes that houses will remain in demand as people need homes.

“I would like to remain cautiously optimistic as I think KL has a lot going for it, and it is great that there is a lot of competition around,” he says.

What is next for Bukit Kiara Properties? Tong says the group aims to concentrate on one project at a time, which at the moment is Verve Suites KL South. He shares that the next Verve Suites offering will be in Jalan Tun Razak, with another upcoming project in Ampang.