Parkfield Residences has a gross development value (GDV) of RM453 million and covers 47.95 acres. In its entirety, Tropicana Heights Kajang is a 199-acre development with an estimated GDV of RM2.18 billion. So far, Tropicana has launched the first phase, Fairview Residences, as part of eight planned phases of development.

Tropicana executive director of marketing and sales Pam Loh expects a repeat performance for the take-up rate of Parkview Residences — Fairview Residences has recorded an impressive 95% take up rate since its launch in February this year.

“We have some customers who are already awaiting delivery of the product [Parkfield]. Priority will be given to Tropicana Club privilege card members who will have a first-hand look at the preview session,” she says.

According to Loh, some 2,000 to 3,000 potential customers have registered an interest in Parkfield Residences. “We think the conversion rate of bookings to sales will be high but we’re keeping patient for the moment as the banks are slow [to process loans],” she says.

Loh says the development will set new benchmark prices for gated developments in the area. She justifies the high prices with a number of features offered by Parkfield Residences, such as a 16-acre central park with a 750m “linear lake”, pedestrian pathways and jogging tracks. Tropicana also plans to transplant large trees from the existing golf course and carpet the park with fresh grass. There will also be a children’s playground, a fitness garden, a futsal court and a spice garden within the park.

Residents can also look forward to a commercial centre with a net lettable area of 864,222 sq ft within the park. The retailers have yet to be confirmed, but should be by the time residents move in, says Loh.

“It will be a dedicated commercial area though we have yet to decide whether it will be run by Tropicana or sold,” she says.

The development will also feature a recreational hub run by Tropicana, which will offer amenities such as gyms and swimming pools.

Houses in Parkfield Residences also come fitted with water heaters in all bathrooms, air-conditioners for bedrooms and an alarm system. The phase is expected to be completed in the fourth quarter of 2017.

Commenting on the remaining phases of the development, Loh says the company intends to launch the remainder of its Kajang units over the next three years, with phase three to be launched somewhere next year.

“We intend to launch the third parcel of land next year and have two more parcels for high-rise,” she says.

Loh points out that the appeal of Kajang lies in its low density — people are moving to the area from more crowded locations such as Petaling Jaya and Cheras.

“Our buyers consist of a mixed crowd from Kajang and also areas like PJ. It (the project) appeals to the younger generation who are starting out and want a better environment for their children,” she says.

Loh says the target market for the properties is the affluent class. “We’re noticing a trend where parents assist the children with the down payment and their children finance the loan.” She adds that the shortage of quality housing in the area provides Tropicana with a competitive advantage given its value-added offerings of a park and recreational centres.

Loh says that early-bird buyers can expect a 5% rebate on prices and free usage of recreational facilities until 2019.

The company currently has at least two projects in the pipeline — Tropicana Aman based in Canal City, near Kota Kemuning, which it expects to launch next year, and Tropicana Danga Cove in Johor. The combined GDV of the two projects is said to be RM25.1 billion. 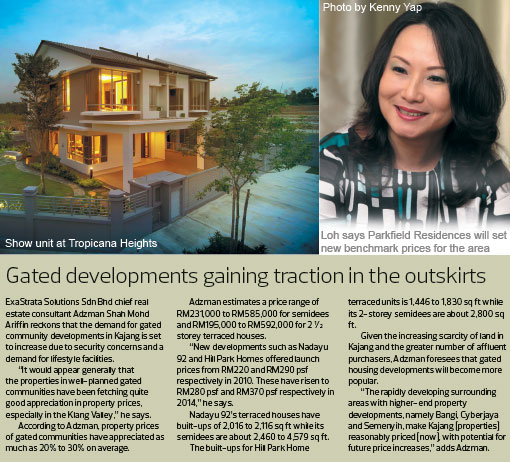