City & Country: Crossing to The Straits

Such is the case with Michael Tan Shyue Jing, director and co-founder of Southeast Asia Landmark Sdn Bhd. After working as a corporate banker for 10 years, he realised he wanted to try something different and threw himself into the property industry.

“I’m not the first banker to join this industry,” he laughs.

“I was a corporate banker with Arab-Malaysian Merchant Bank Holdings Bhd (now known as the AmBank Group) and Standard Chartered Bank Malaysia Bhd, where I dealt with loan structures for developers, before I joined Southeast Asia Landmark.” 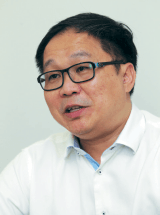 Tan says it was from there that his interest in property development grew. With encouragement from his friends and contacts in the property industry, he decided to take a chance at a new career.

Interestingly, his first project in the industry is also Southeast Asia Landmark’s maiden development — The Straits.

The first to fourth floors will house the parking bays for residents, the fifth and mezzanine floors will contain the facilities, the sixth to 23rd floors will be the apartments, and the penthouse will be on the 24th floor.

The units will be divided into five different types — A and A1, B, B1, C and C1. The design includes one bedroom + one study area, three bedrooms and two bedrooms + one study room.

Tan says, “We believe The Straits will be a successful project due to the uniqueness of its location, which is quiet and serene. It is a residential enclave within Johor Baru city.”

He points out that being surrounded by colonial-type rest houses, well-constructed Malay houses, modern bungalows and mature lush trees add to the ambience of the development.

The Straits’ tentative launch date is March 8. The developer jointly organised a cocktail event with BMW on Dec 6 last year to meet and greet clients. Tan says the take-up rate has been encouraging so far, with 18 units sold during the event.

The idea for the development came about five years ago when one of Southeast Asia Landmark’s partners saw the parcel and pitched the idea to Tan. After much discussion, the team decided to purchase it.

The project sits on a 0.8-acre freehold parcel, which was initially inhabited by Malay squatters and was under a no official zoning (non-classified) title. According to Tan, the developer was successful in its application to rezone it into a commercial area.

“The location actually suits The Straits’ concept as, apart from being close to the Straits of Johor, the whole area is very English and colonial.

“The idea is to create an exclusive residential project with extra considerations for the residents. That is why we added details such as a kitchen island. We want our customers to be able to get the best from us,” he says.

The project’s outer façade will look different when seen from each of the four sides of the building. “Basically, when someone is looking at the building, he or she will see a different design at each side,” says Tan. It was designed as such to make the development more unique, he adds.

Apart from that, the units will have three-metre-high ceilings and two-metre walkways to create a more spacious feel for the residents. Residents can even choose to place a small breakfast table on the balcony.

“The balcony is fairly large and residents can comfortably spend their time there. We will also have a water tap at the balcony area to make cleaning easier. I have a condominium and I hate carrying a pail of water out every time I want to wash the balcony.”

While the project is officially a serviced apartment, it is actually more similar to a condominium.

“There will not be services customary to those in a serviced apartment. However, the normal facilities available in a condominium, such as a swimming pool, an aqua gym, a pavilion and a gym, will be available,” says Tan.

Challenges and the future

While the change in career has been challenging for Tan, he says it has also been interesting.

“For me, as an outsider who comes from the banking industry, we [bankers and developers] tend to see things differently. The biggest challenge I have to say was getting the team to work as a team and see that our goals are met. That meant finding a way to sync all the different ideologies together.”

There has been a rising concern over the large incoming supply of high-rise residences due to the massive launches from Chinese developers recently.

According to Samuel Tan, director of KGV-Lambert Smith Hampton (M) Sdn Bhd (Johor), the current environment in the state’s property market is more suited to owner-occupiers.

“With so many units coming up right now, a development will need to have unique features to attract buyers. As it is, 80,000 units have been approved for development with 10% already in construction. So, there is a lot of competition for tenants.”

He says with uncertainty in the economy right now and without knowing how long it will last, the next two years may be tough.

Southeast Asia Landmark’s Tan, however, is unfazed and firmly believes that while the current property market is challenging — in line with the situation in the overall macroeconomic environment — exclusive projects with well-thought-out designs and good locations are still in demand.

“The market feedback is that small and exclusive projects are still doing alright. I believe high-rises with nice features and good quality will still be appealing. There is a market for nicer products compared with the mass market products.”

He says the company is targeting middle to high-income professionals and expatriates as well as existing residents in the area who are looking to upgrade.

“The development is very accessible. The project is 300m from the Jalan Lingkaran Dalam that connects directly to the CIQ (Sultan Iskandar Custom & Immigration Quarantine Complex), which is part of the Southern Integrated Gateway project. It is also a mere eight-minute drive from the JB Sentral railway hub near the Johor Causeway and seven minutes from Komtar Johor Baru City Centre and Persada Johor International Convention Centre.”

One downside to the development is that it is more suited to those who own their own vehicle as public transport is scarce. There is, however, a bus stop about ½km away.

So what’s in store for this new company? “Well, we have another parcel 500m from The Straits. It’s 1.2 acres, also freehold. We plan to build a similar development, The Peninsular, which will have the same concept but a different design. The Peninsular will have more rooms and is targeted to be launched in the second quarter of next year,” says Tan.

“There will be an al fresco restaurant on the ground floor and it will be dual-key units, a more modern family unit. There will be two swimming pool deck areas … a jogging track and, like The Straits, the outer façade will have a different design on each side.”

Tan says more environmentally friendly materials will be used in The Peninsular. Built-ups for the units will range from 500 to 1,600 sq ft.

“So with all this going on, we will be busy for the next three years or so,” he concludes. 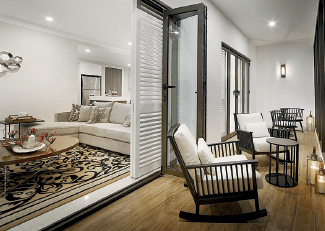