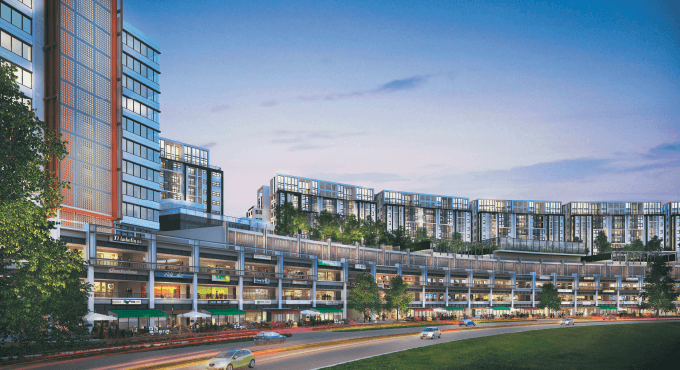 UEM Sunrise Bhd and Sime Darby Property Bhd formed a 50:50 joint-venture company in 2010 to build mixed-use development Radia @ Bukit Jelutong. But it was delayed for several years as the partners had to iron out some issues, including approval for the master plan from the authorities.

Sime Darby Bhd group chief operating officer and Sime Darby Property managing director Datuk Abd Wahab Maskan had said in 2013 that as the 20.95 acre development site comprised three parcels, it was taking time to fine-tune the design and get the relevant approvals.

Upon its completion in 2018, the RM1.6 billion development will provide shopping convenience and easy access to services for the 40,000 residents and working population in Bukit Jelutong .

“This development is aligned to Sime Darby Property’s journey of innovation, from a developer of townships to a developer of themed, integrated, transit-oriented and niche developments,” Wahab had also said. “We are creating a well-planned, well-executed integrated development with retail, commercial, office and lifestyle aspects that will enhance convenience and economic activity in and around our Bukit Jelutong township.”

The development was inspired by “faubourg” — an ancient French term that roughly means “suburb” — in which concept a whole neighbourhood has a special character. So, Radia @ Bukit Jelutong will be exclusive and cater for the everyday needs of its residents. It will also comprise wide pedestrian spaces and a retail promenade with a resemblance to Las Rambles in Barcelona, Spain.

The name “Radia” itself refers to the Latin radius — a line connecting the centre of a circle to the outer edge.

Designed by French architect firm J+H Boiffils, the development will look like a hand fan with a fusion of Mediterranean and Asian themes. “We decided on a Mediterranean concept as it is warm with a strong sense of community,” says UEM Sunrise chief financial officer Azhar Othman. “We want to promote outdoor living with style, such as La Passeggiata, which is the art of evening strolls, and space where people can come together to relax.” 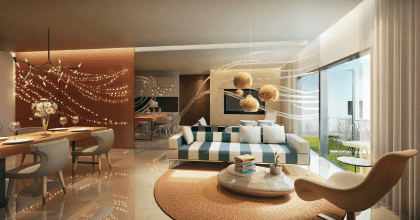 Besides the residences, there are four acres of facilities that include orchid gardens, a jogging track, luxurious spa tools and serene koi ponds. There will be 24-hour security at the main lobby of every block and each will have a separate entrance that can only be accessed with a resident card.

The green features of the development include energy-efficient lighting in the common areas, water-efficient fittings and rainwater harvesting. The units will come with kitchen cabinets, water heater, hood and hob and split unit air-conditioning. 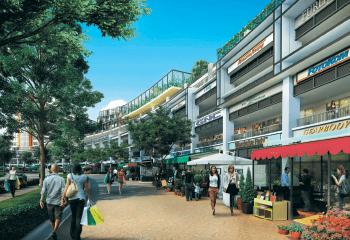 The retail component — Radia Retail — comprises 152 one, two and three-storey units. Their built-up is from 376 to 2,779 sq ft while their price is from RM1 million, or an average of RM1,100 psf. A 17ft-wide pedestrian walkway and 686 parking bays for commercial use are among the features.

The boutique mall, the plans for which are still in the works, will feature mostly high-end shops.

The nearby universities include Malaysia Institute for Supply Chain Innocation University, KDU University College, Glenmarie and the UiTM main campus while the malls in the vicinity include Setia City Mall in Setia Alam, Empire Subang, Subang Jaya, and Subang Parade.

Radia @ Buki Jelutong is just a 15-minute drive from Setia Alam, Subang Jaya, Shah Alam and the Skypark Terminal while the Kuala Lumpur International Airport is 45 minutes away. “It’s so convenient,” says Azhar. “I reside in Seremban and when I have to make my way down here, I use the ELITE, which takes me less than an hour.”

UEM Sunrise and Sime Darby Property are targeting single young individuals looking for an affordable home that comes complete with modern conveniences and is close to the workplace. They would include the lecturers from the nearby colleges and universities and employees of Subang Airport.

“I believe this is a good location for young couples and families looking for a balanced lifestyle and an ideal place for children to grow, for upgraders from the nearby towns that are overpopulated and congested, and for parents living in Bukit Jelutong who are buying for their children,” says Salem.

Azhar adds that Radia @ Bukit Jelutong is also ideal for retired couples looking for a safe place with a slow pace of life and investors looking for niche developments with a strong concept and architecture. “So far, we have registered buyers from F&B, pharmaceutical, optometry and consultancy firms, among others. As for the offices, we have to launch the retail component first but we are looking for en-bloc buyers who want to relocate or set up a business. These may include educational and private medical operators.”

As the development is stratified, its management will eventually be handled by a committee comprising its residents.

The sales gallery for Radia @ Bukit Jelutong is scheduled to be officially launched on March 28.

Property consultants that City & Country spoke to see Bukit Jelutong as a mature area that is good for investment. The 15-year-old township covers 2,200 acres of prime freehold land and was originally an oil palm estate. Named after the Jelutong trees in the area, the township was developed by Guthrie Property Holdings Bhd, a subsidiary of Sime Darby Bhd.

So, will Radia @ Bukit Jelutong see the reception that UEM Sunrise and Sime Darby Property are hoping for?

Zerin Properties Sdn Bhd CEO Previndran Singhe believes it will do well. “It’s a freehold, well-connected mature neighbourhood. Best of all, the LRT is being extended to Section 13, Shah Alam. The extension has already been approved and work should start this year, thus making the development more accessible. Plus, at the price the residential units are being sold, I think it will succeed.”

JS Valuers Property Consultants Sdn Bhd executive director Chan Wai Seen, however, is not so optimistic. He says while the area is indeed a mature and good location, apartments and condos are a new thing there — Bukit Jelutong consists mostly of landed properties.

“Because these are new to that market, entry prices that are too high may be a deterrent,” Chan cautions.

Moreover, stringent loan approval rates are a cause for concern. Yet, Azhar and Salem are unperturbed. “Market sentiment is, of course, important but I am confident that this development will do well because its location is strategic and its features are attractive,” says the former.

Previndran is of the same opinion. He says RM500,000 is a good entry point for young couples and professionals. “I think you also need to see the parity. Terraced homes in Bukit Jelutong have already crossed the RM1 million mark. So, RM500,000 seems good.”

Kevin Goh, associate director of agency and marketing at Savills Malaysia , believes the Bukit Jelutong area has bright prospects. “Over the years, it has matured and now we see big industrial players moving into the area. So, it has definitely picked up.”

On the property market, Azhar comments that it is still challenging and that sentiment is generally cautious with everyone waiting to see the effects of the upcoming Goods and Services Tax (GST) and rising fuel prices. “The market is going to be challenging for the next two years, at least, but well-known developers that offer lifestyle products of good quality will prevail,” he says.

Salem concurs with Azhar. “The market is always going to go up and down. But the right products targeted at the right market will definitely do well. There is an array of segments, so as a developer, we just have to know what our customers want and give them that,” he says.

So, while Radia @ Bukit Jelutong keeps them busy, do the two developers have another joint venture in the pipeline? “We are open to the idea and should the opportunity arise, why not?” says Salem.