KLUANG in Johor is regarded by many as a small town. To Kluang-born Tey Ah Kau, it is a home that he is proud of and he believes there are many development opportunities there.

Tey founded Majupadu Development Sdn Bhd in 1989 with one objective in mind — to upgrade the lifestyle of those in Kluang. Since then, the company has completed 36 projects, delivered over 6,000 units of homes, shopoffices and a retail mall, and introduced concepts more commonly seen in cities such as Kuala Lumpur. Among the concepts are gated-and-guarded residential developments, such as the 50-acre Taman Delima 3, and a lifestyle mall, Kluang Mall.

“I have always believed that the company should focus on upgrading Kluang and the lifestyle of the people. This direction has made it successful and this is why we have been innovative in introducing new features in our projects,” he says.

Kluang is a town and district in central Johor. Located about 2½ hours from KL, the district has a diverse economy with sector-leading companies in agriculture and industry. It has been known as an agricultural centre since the 1970s and is the largest palm oil producing district in Johor, contributing to over a quarter of the state’s palm oil production. The town has a population of 314,400, with 51% of them below 29 years old.

Tey, who is the managing director of Majupadu, started off in commercial services, facilitating and dealing in land matters for the public. He went on to set up a construction company. His first taste of property development came under trying circumstances and times.

“I started the project in 1985, but it coincided with the financial downturn. I had difficulty completing the project, leaving about 100 buyers with unfinished homes. The buyers were angry and gathered and shouted in front of our office every day,” recalls Tey.

He decided to soldier on and travelled to KL every other day to convince bankers to continue financing the project. Eventually, his efforts paid off.

“I managed to continue the project and fulfil the promises to the purchasers. It was very risky but delivering what I promised to the buyers is very important to me,” Tey says, admitting that he had, at one point, wanted to give up.

“Even though it was difficult trying to recoup the investment, I learnt a lot from the experience and gained the buyers’ trust. In total, I completed over 750 units of housing in projects in Kahang, Kluang and Layang-Layang at that time.”

By the time he formed Majupadu, the economy had rebounded and businesses were expanding, which led to job creation. This resulted in more demand for homes, and the developer seized the opportunity.

“We started with Taman Majupadu, a 125-unit residential development consisting of 1 and 2-storey terraced houses. By the third phase, we had the best reputation in Kluang for quality workmanship, trendy design and after-sales service. Because of this,  24 of our subsequent projects were sold out within a day. We are always introducing new ideas and concepts in the market. We were also the first to initiate the formation of a residents’ committee and the introduction of the landscape concept,” says Tey.

One of the projects was Taman Gunung Lambak, comprising 250 houses. It was selected as a model development by then menteri besar Tan Sri Muhyiddin Yassin.

Tey believes people in Kluang want an improved lifestyle, noting that many who have visited KL and Singapore hope for properties with good features and that can appreciate in value.

“Majupadu has spent a lot of effort upgrading the community around it. Now, the company is upgrading itself. It is one of the reasons why I have been giving more responsibilities to my daughter, Tey Fui Kien,” he reveals.

After graduating with a law degree from London, Fui Kien did her pupillage with Lee Hishammuddin Allen & Gledhill. Then, she worked in research house HwangDBS as a junior editor for six months. She joined Majupadu in 2004.

“My father asked me to come back to Kluang and I have not looked back since,” says Fui Kien, who is now the executive director.

She started with basic administrative work, answering calls and attending to customers.

“Then, in 2010, I was given permission to enter the construction site of Taman Delima 2, which was my first project. Eventually, I was given the opportunity to participate in the whole process of delivering two major projects — the company’s recent residential project, the RM104 million Taman Delima 3, and Kluang Mall, the largest lifestyle mall in town.”

Taman Delima 3 sits on a 50-acre freehold tract and will have 508 units of low-cost homes, 2-storey terraced houses, semi-detached houses, zero lots and bungalows. The selling price starts at RM186,000. The project is due for completion next year.

Kluang Mall sits on a 6.5-acre freehold parcel and has a net lettable area of 335,594 sq ft. The first property to be managed by the company, the mall has more than 160 stores across five retail floors and 1,129 parking bays.

With tenants such as Pacific Hypermarket & Department Store, MBO Cinemas, Popular Bookstore, senQ and Ampang Superbowl, the mall serves the town’s young population and visitors from Ayer Hitam and Singapore. It has weekly visitor traffic of 132,460. Recently, the mall welcomed more nationally known shops such as Starbucks, Sakae Sushi and The Body Shop.

Now, Majupadu is ready to tackle its biggest and most ambitious project — the 247-acre Newpark. 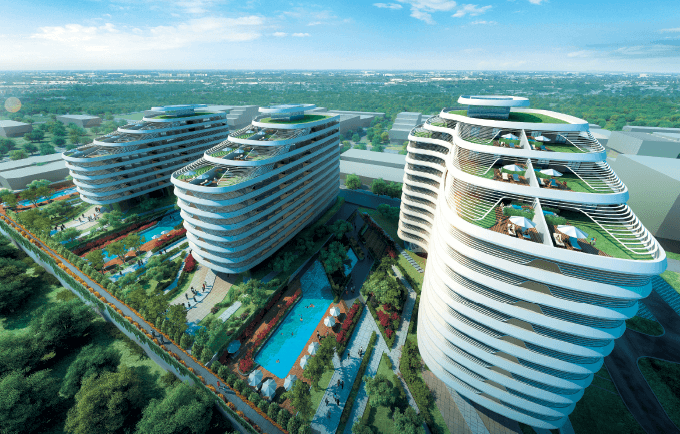 The developer spent most of last year planning Newpark, which is Kluang’s first master-planned commercial town centre. It will also be a green and ecologically sustainable development.

“We are collaborating with Pomeroy Studio from Singapore, an award-winning architecture and design studio with experience in green design. We believe sustainable design can result in operational cost savings, which will benefit the project in the long run. Newpark is a long-term development, so we feel the investment in green, sustainable design will benefit its residents and businesses in the future.

“Newpark will be a new second commercial centre for Kluang. The current town centre is already developed,” says Fui Kien.

Some 90 acres of the freehold Newpark have commercial titles, while the remaining 156 acres are slated for future development of landed homes. The first phase will comprise high-rise residences, a hotel, shopoffices, an education hub and a hypermarket. Details of the other phases have not been finalised at press time.

“Newpark will feature the tallest business-class hotel in Kluang and its first high-rise residences, as well as a commercial district of well-designed shop­offices,” says Tey.

“We haven’t measured the actual size of Phase One. We believe Newpark is the kind of innovative new development that we want to bring to Kluang,” says Fui Kien.

Phase One will have 86 units of 2 and 3-storey shopoffices measuring 24ft by 70ft. Its residential component — The Residences at Newpark — will have three towers of 12, 10 and 8 storeys, with a total of 318 units. According to Fui Kien, the company will first develop the 8-storey Tower 3, comprising 82 units. The Residences will have a swimming pool, barbecue area, terraced garden, children play area, mini cinema and lobby, among other facilities, for each tower.

Prices and other details of Phase One are still being finalised.

“The towers are designed in the shape of a cruise ship. This is to depict resort-themed lifestyle living,” says Fui Kien.

The hotel will be a four-star equivalent hotel that will be managed by the developer.

“Kluang has many small hotels but it has yet to offer a business hotel or even a convention centre. Given that there are some international companies based here, there is a need for these facilities,” says Fui Kien.

“This is based on a market research on hospitality that we did recently. We interviewed companies in Kluang and asked them for feedback on the hospitality market here. From that, we can see there is a demand for a business hotel with facilities like a convention centre, ballrooms and meeting rooms.”

Tissue paper producer Kimberly-Clark and UK-based nitrile production giant Synthomer plc are two of the multinational corporations based in Kluang. Other MNCs include MML Marketing Sdn Bhd and Guocera Marketing Sdn Bhd, which are among the top 20 ceramic tile producers in the world.

The district’s educational hub will cater for all levels of education, from primary to university. Fui Kien explains that the group is targeting vocational schools or universities.

“We plan to enter the hospitality industry, especially when the hotel is completed. Newpark will offer places for these future students to practise, in hotels, for example.”

Majupadu plans to keep the educational hub and hypermarket to generate recurring income. The developer held a preview of the first phase of Newpark on Jan 16, but will only start selling the units at a later date.

While the gross development value has not been finalised, Tey and Fui Kien expect the project to contribute to the company’s revenue for the next 20 years.

“Given that it is a long-term project, we are still planning the phases. Furthermore, our potential partners have a strong interest in shaping Newpark’s development, so we are also getting their input.

“We also want to attract high-tech industries in the future. Essentially, any major feature of a modern economy will be provided for in Newpark. At over 90 acres, we have the land. We have a master plan. Now, we are spending time talking to partners and companies willing to invest in Newpark,” says Fui Kien.

Newpark is designed to meet the future needs of Kluang, hence the project will focus on the local market.

“With such a comprehensive township development, we expect potential investors from nearby towns such as Batu Pahat, Yong Peng, Kahang, Paloh and Johor Baru. Property prices in Kluang are considered extremely competitive when compared with Batu Pahat and JB,” says Tey.

Introducing such a concept on a big scale comes with its share of risks, but Tey is optimistic that it will do well and will be supported by Majupadu’s previous successes.

“We are confident because we believe the project will benefit Kluang’s economy. We have a long-term view, so we are not concerned about short-term issues at this point. It is a strategic tract, connected to the main road and very large at 90 acres. It is the most strategic tract in Kluang, which is in the centre of Johor,” he says.

3.5 million. Within a two-hour drive, we have the over five million catchment area of Singapore,” Fui Kien points out.

Furthermore, Kluang folk have plenty of disposable income, she says.

“From our experience with Kluang Mall and our research, we found that one quarter of our shoppers have household incomes of over RM7,000 a month. We also have our retailer sales records — the top brands in Kluang Mall do excellent sales, better than in some places, even the Klang Valley, probably because there is a lot of competition there.

“From our market research, we also discovered that almost 80% of our shoppers use a smartphone. So, they are connected and informed. All this research is from a large survey sample of 1,121 respondents.

“We believe Newpark will be a very important development and we have the conviction to make sure that it will be a top quality one,” concludes Fui Kien. 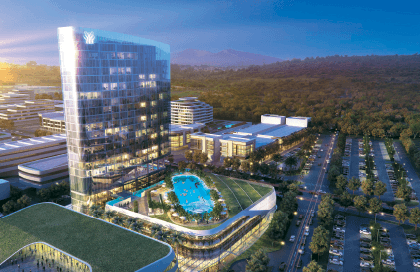 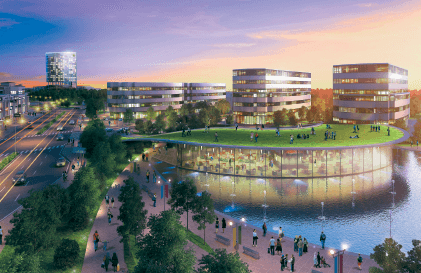 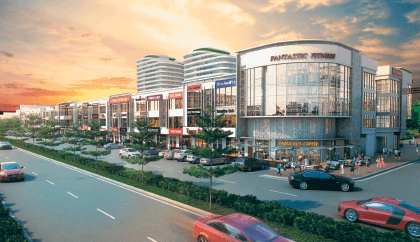