Chopin’s heart gives up its secrets 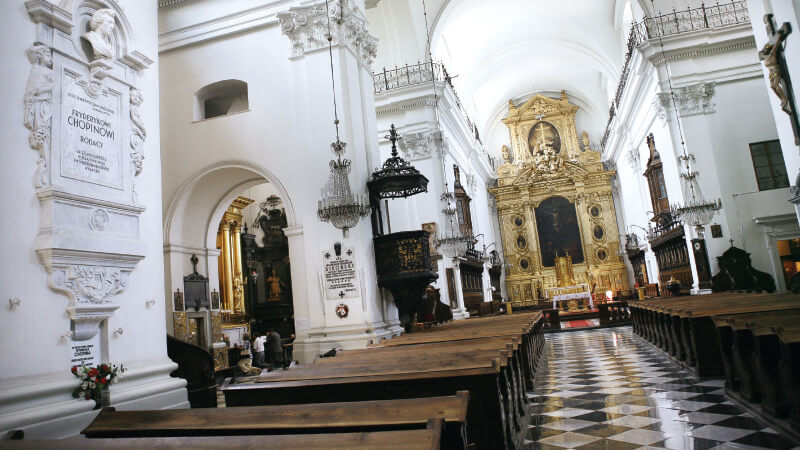 The Warsaw Saint Cross church where rests the heart of Polish-French pianist Frederic Chopin. Among the world’s most cherished musical virtuosos, Chopin may finally have given up the cause of his untimely death. The prolific 19th-century Polish-French pianist and composer died at the age of 39, of what had long been believed to be TB.

The heart of Frederic Chopin, among the world’s most cherished musical virtuosos, may finally have given up the cause of his untimely death.

The prolific 19th-century Polish-French pianist and composer died at the age of 39, of what had long been believed to be tuberculosis (TB). However, in 2008, Polish medical experts raised the possibility that Chopin — whose health had always been very frail — had actually suffered from cystic fibrosis (CF).

The genetic respiratory illness clogs the lungs with sticky, thick mucus and sufferers on average generally do not survive past their late 30s.

Now, Polish scientists, who were the first to use modern technology to study Chopin’s heart — preserved for the last 168 years inside a crystal jar in what appears to be cognac — believe they are a step closer to an accurate diagnosis.

“We can say that it is highly possible that it was tuberculosis,” lead researcher Professor Michal Witt, a top specialist in molecular and clinical genetics, told AFP.

Unable to open the hermetically sealed jar, his team of medical experts used high-resolution photographs taken in 2014 to make their diagnosis.

“The lesions which we saw fit well with the initial diagnosis which was held for years, namely tuberculosis. The lesions are clearly visible on the pericardium of Chopin’s heart,” Witt said, referring to the organ’s outer membrane typically affected by complications stemming from TB.

The findings of Witt and his team are due to be published in the February print issue of the esteemed American Journal of Medicine, complete with a unique photograph of the pickled heart.

But without DNA tests, Witt admits that he cannot entirely rule out the possibility of CF.

In 2008, Poland’s culture ministry rejected a request by academics to run DNA tests on the relic to check for the CFTR gene, a telltale sign of CF, over fears the procedure could irreparably damage the heart.

“We cannot prove this for sure, but the likelihood that it was tuberculosis rather than cystic fibrosis is far, far higher. We can say that with a high degree of confidence.”

Records show that as an adult weighing 40kg at a height of 1.70m, Chopin was chronically underweight, a typical symptom of CF.

Without genetic tests, it is also impossible to be entirely certain that the organ itself is Chopin’s, although as Witt points out, there “is no reason to believe that it isn’t, at least to our knowledge.”

Last examined in 1945 after World War II, the heart is “clearly visible” and well preserved in what Witt calls a “light amber brown” liquid. “It’s highly possible that it is cognac,” he said, adding that “since the French Revolution, cognac has been used as a preservation fluid in France.”

Chopin’s heart is kept inside a pillar in Warsaw’s sprawling and ornate baroque Church of the Holy Cross. After his death in exile in Paris in 1849, it was brought to Chopin’s native Warsaw that same year by his elder sister Ludwika to honour his dying wish. The rest of Chopin’s remains are buried in the French capital’s Pere Lachaise cemetery.

Born in Zelazowa Wola near Warsaw in 1810, Chopin composed many of his most moving pieces in his father’s native France, where he ended up after an 1830-1831 uprising of Polish insurgents against the 1795 partition of Poland by Russia, Prussia and Austria.

Having refused to take a Russian passport, he was never able to set foot on his and his mother’s native Polish soil following the failed insurrection.

Described by 19th-century German composer Robert Schumann as “cannons hidden among blossoms”, Chopin’s music was and remains a symbol of Poland’s long and turbulent struggle for freedom. — AFP