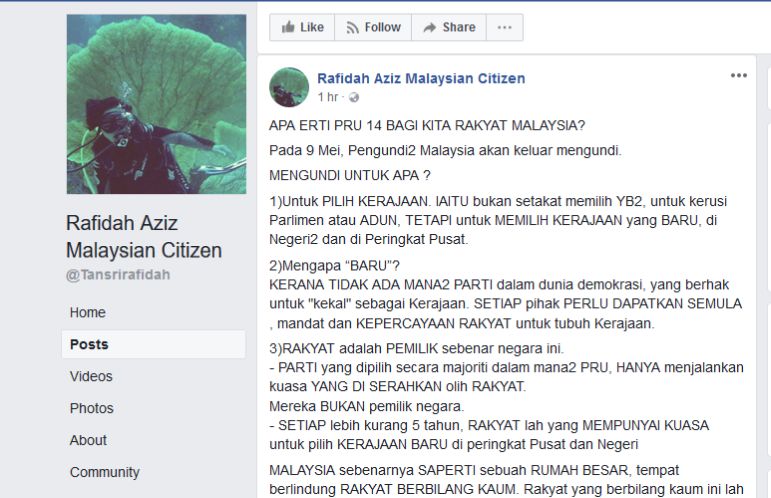 KUALA LUMPUR (May 1): Malaysians should reject Barisan Nasional and pass the mandate to administer and care for this country to the Opposition coalition Pakatan Harapan instead, urges former Minister of International Trade and Industry Tan Sri Rafidah Aziz.

In a Facebook post this afternoon entitled ‘Apa erti PRU 14 bagi Rakyat Malaysia?’ (What is the meaning of GE14 to the people of Malaysia?), Rafidah, who is also a former Wanita Umno chief, likened the country to a home with its multi-ethnic citizens as the owners, while BN is the contractor who was given the job to care for it in the past.

But BN under “Najib & Co”, said Rafidah, referring to the caretaker government’s Prime Minister Datuk Seri Najib Razak and his colleagues, have failed to take good care of this “home”, resulting in the country becoming a laughing stock in the eyes of the world now and shaming its people.

The veteran Umno leader said this after listing six reasons why BN should be rejected in GE14, with “the most glaring” being the wrongdoings related to 1Malaysia Development Bhd or 1MDB.

“The whole world knows the details and inner workings of 1MDB’s operations and the connections with certain parties. Other countries have taken actions on those found guilty over certain aspects related to 1MDB. But in Malaysia, the status is still ‘no case’, ‘not related’, etcetera. There has been no clear or reasonable explanation given by any parties. Documents have been classified secrets, indicating lack of transparency,” she said.

She also claimed that there has been interference in the probe of 1MDB, with investigating officers being changed, while the Speaker in Parliament has repeatedly stopped queries regarding the strategic investment fund.

Among the other reasons she cited were economic development that is below expectation — despite the growth seen in terms of statistics, she said the people are having problems supporting themselves in the face of rising prices of goods — the loss of foreign investors’ confidence, the country’s worsening debts, and the falling integrity of public institutions.

“It is obvious that the contract we gave them (BN) in 2013 should not be extended. Our home has not been cared for well. It’s obvious that some assets that are really strategic and valuable have gone missing. The country’s debt keeps rising. The world has named the administration of this country a ‘kleptocracy’, which is a ‘rule by thieves’,” she said.

So the “contractor” needs to be changed, she said, to a new one with a manager that has a proven track record.

“Malaysians don’t have to be sentimental to terminate the old contract. Our home is getting damaged and has been invaded by destructive pests. We need the efforts of a new contractor to repair it now.

“Don’t wait till our home, which has stood firm and magnificent for so long, collapses. Malaysians should change the contract[or] to administer our beloved country. Give that amanah (trust to administer the country) to Pakatan Harapan," she added.