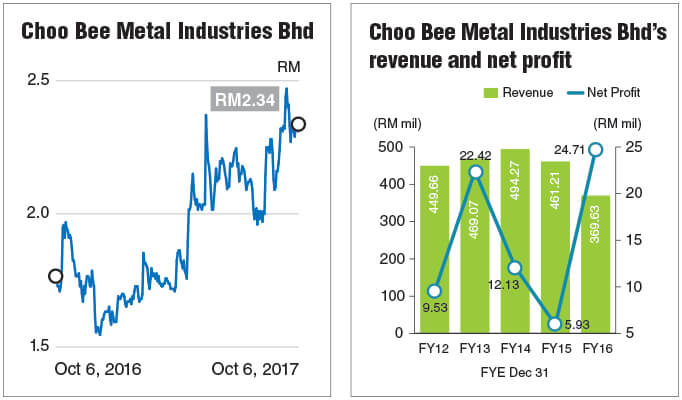 KUALA LUMPUR: With steel prices hitting a five-year high, and the government dishing out more infrastructure contracts, Choo Bee Metal Industries Bhd, which produces flat steel products for the construction industry, is feeling quite optimistic about its prospects.

“We have seen the price [of steel] really move up since July. It has hit [a five-year] high at the moment. At RM3,000 per tonne, it’s an extremely good price. It’s really a positive development for us,” said chief financial officer Mark Tan in a recent phone interview with The Edge Financial Daily.

Tan also observed there has been some pickup in the property sector, which is further supporting the group’s upbeat sentiment.

Choo Bee is anticipating up to a double-digit growth in net profit for its current financial year ending Dec 31, 2017, despite a 37% year-on-year (y-o-y) contraction in earnings recorded in its second quarter ended June 30, 2017 (2QFY17), dragged by higher raw material prices and foreign exchange losses.

Though 2QFY17’s revenue came in 6% higher y-o-y, thanks to higher manufacturing contribution because of better selling prices and sales, this was partly offset by its trading segment, where top line eased 6% on weaker sales as dealers turned cautious amid softer market demand.

But that’s about to change. “We’re seeing demand rising now. The construction industry is getting more active in the second half of the year. Since the third quarter, we have seen more orders coming in, and we expect the momentum to continue in the fourth quarter,” said Tan.

And with the upcoming 14th general election, Choo Bee expects the award of infrastructure projects to pick up pace. “This bodes well for the construction industry [and] for steel players in Malaysia,” said Tan.

Going by the first half FY17 (1HFY17) performance, that looks achievable. For notwithstanding the slower 2QFY17, Choo Bee’s 1HFY17 net profit was already up 40% y-o-y to RM17.9 million from RM12.8 million, thanks to wider profit margins due to higher average selling prices, while revenue edged up 1.03% to RM199.6 million from RM197.5 million.

Choo Bee has been making steel products for construction, oil and gas applications since its incorporation in 1971. It also trades hardware products and other building materials.

Presently, its manufacturing segment makes up 40% of the group’s revenue, while its trading segment contributes the remaining 60%.

The domestic market makes up the lion’s share or 95% of the group’s sales. Its only export market now is Singapore. Tan said Choo Bee intends to re-enter the US and the Middle East in the long run, but gave no timeline.

Going forward, Tan said Choo Bee is looking to strengthen its position in Malaysia, to be one of the top steel players in Malaysia, and that the group is realigning and re-strategising their cost structure and production capacity to meet that target.

“Once we have established that in the next five to 10 years, we will start considering [expanding] our overseas market,” said Tan.

In the mean time, Choo Bee is looking to set up another new factory as part of its 10-year expansion plan. “Everything is still in planning stage ... it will be in the Klang Valley. It will be near our existing warehouse in Kampar because we want to centralise everything. It makes more logistical sense,” Tan said.

Choo Bee’s sole factory in Pengkalan, Perak, which produces about 110,000 tonnes per annum, is now running at about 75% capacity.

Choo Bee is also planning to add new products, like with higher thickness range for pipes. “Since we’ll be investing in a new machine [for the new factory], we want to do something more than what our competitors are doing,” said Tan. Offering more niche products will enable Choo Bee to command more premium prices, Tan said.

As for the issue of foreign labour shortage, Tan added it is not so much an issue now as the entry of workers from countries like Nepal and Bangladesh is now allowed.

Choo Bee shares rose three sen to close at RM2.34 last Friday, giving it a market capitalisation of RM254.92 million. Year to date, the stock has gained about 43%.