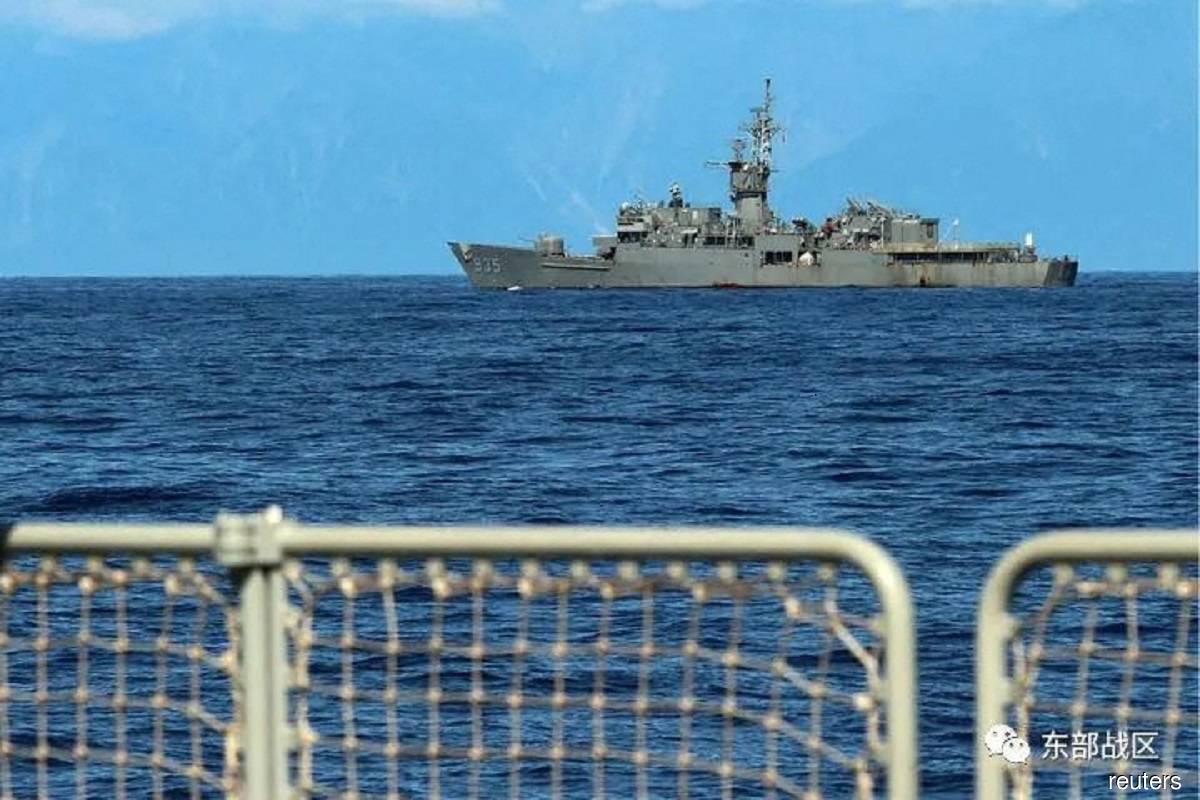 TAIPEI (Aug 7): Chinese and Taiwanese warships played high-seas "cat and mouse" on Sunday ahead of the scheduled end of four days of unprecedented Chinese military exercises launched in reaction to a visit to Taiwan by the US house speaker.

Nancy Pelosi's visit last week to the self-ruled island infuriated China, which responded with test launches of ballistic missiles over the island's capital for the first time and the cutting of communication links with the United States.

Some 10 warships each from China and Taiwan sailed at close quarters in the Taiwan Strait, with some Chinese vessels crossing the median line, an unofficial buffer separating the two sides, according to a person with knowledge of the matter.

The island's defence ministry said in a release multiple Chinese military ships, aircraft, and drones were simulating attacks on the island and its navy. It said it had sent aircraft and ships to react "appropriately".

As Chinese forces "pressed" the line, as they did on Saturday, the Taiwan side stayed close to monitor and, where possible, denied the Chinese the ability to cross, the person said.

"The two sides are showing restraint," the person said, describing the manoeuvres as high seas "cat and mouse".

"One side tries to cross, and the other stands in the way and forces them to a more disadvantaged position and eventually return to the other side."

Taiwan said its shore-based anti-ship missiles and its Patriot surface-to-air missiles were on standby.

The Chinese exercises, centred on six locations around the island that China claims as its own, began on Thursday and are scheduled to last until midday on Sunday, the official Xinhua News Agency reported last week.

China's military said on Saturday the sea and air joint exercises, north, south-west, and east of Taiwan, had a focus on land-strike and sea-assault capabilities.

The United States called the exercises an escalation.

"These activities are a significant escalation in China's efforts to change the status quo. They are provocative, irresponsible, and raise the risk of miscalculation," a White House spokesperson said.

"They are also at odds with our long-standing goal of maintaining peace and stability across the Taiwan Strait, which is what the world expects."

China said its relations with Taiwan are an internal matter and it reserves the right to bring the island under its control, by force if necessary. Taiwan rejected China's claims, saying only Taiwan's people can decide their future.

China has also warned the United States not to "act rashly" and create a greater crisis.

Referring to the response to Pelosi's visit, the Communist Party's People's Daily newspaper said China had adopted "effective measures that fully demonstrates that China is fully determined and capable of safeguarding national unity and safeguarding... sovereignty and territorial integrity".

Taiwan's Premier Su Tseng-chang told reporters that China had "arrogantly" used military action to disrupt peace and he called on Beijing not to flex its military muscle.

Taiwan's defence ministry said on Saturday its forces scrambled jets to warn away 20 Chinese aircraft, including 14 that crossed the median line. It also detected 14 Chinese ships conducting activity around the Taiwan Strait.

Taiwan's forces on Friday fired flares to warn away drones flying over its Kinmen islands and unidentified aircraft flying over its Matsu islands. Both island groups are close to China's coast.

As part of its response to Pelosi's visit, China has halted communication through various channels with the United States including between military theatre commands and on climate change.

US Secretary of State Antony Blinken accused China of taking "irresponsible" steps and moving away from prioritising peaceful resolution towards the use of force.

Pelosi, a long-time China critic and a political ally of US President Joe Biden, arrived in Taiwan late on Tuesday on the highest-level visit to the island by an American official in decades, despite Chinese warnings. She said her visit showed unwavering US commitment to supporting Taiwan's democracy.

"The world faces a choice between autocracy and democracy," she said. She also stressed that her trip was "not about changing the status quo in Taiwan or the region".

Taiwan has been self-ruled since 1949, when Mao Zedong's communists took power in Beijing after defeating Chiang Kai-shek's Kuomintang nationalists in a civil war, prompting their retreat to the island.

Speaking during a visit to the Philippines, Blinken said the United States had been hearing concern from allies about what he called China's dangerous and destabilising actions but Washington sought to avoid escalating the situation.

He said China's cessation of bilateral dialogue in eight key areas were moves that would punish the world.

Read also:
Taiwan vows to 'never bow to pressure' with China drills due to end