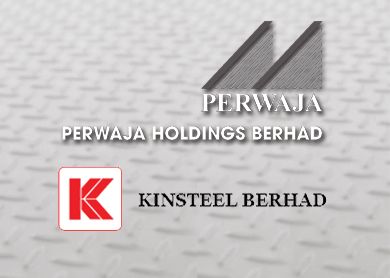 In a statement to Bursa Malaysia, Practice Note 17 entity Perwaja (fundamental: 0; valuation: 0) said the firm signed its second memorandum  of agreement (second MOA) with Zhiyuan to restart the plant in Kemaman, Terenganu. Both companies also signed a lease agreement, under which, Perwaja will lease a portion of the factory land to Zhiyuan.

"Given that the anticipated period for the procurement of the approvals and implementation of the
proposed regularisation scheme will take approximately one year, the second MOA and lease agreement will enable Zhiyuan to gain access to the Kemaman plant, and to bring in new machinery to modify and upgrade the machinery at the Kemaman plant and to revamp PSSB’s (Perwaja Steel Sdn  Bhd ) product lines as soon as practicable.

PSSB is a wholly-owned subsidiary of loss-making Perwaja, which in turn, is a 31.25%-owned associate of Kinsteel Bhd. Perwaja posted a net loss of RM114.15 million during the first half ended December 31, 2014.

Prior to the second MOA, Perwaja had signed an MOA with Zhiyuan last February. The first MOA recorded both companies' intention to explore the possibility of Zhiyuan participating in Perwaja's business to rejuvenate the Malaysian firm.

The Edge Malaysia business and investment weekly (Edge Weekly), in its April 6-12 issue,
reported that Perwaja might rope in Zhiyuan as a major shareholder.

Edge Weekly reported that Kinsteel (fundamental: 0; valuation: 0.9) was in talks on a proposed placement of Perwaja shares to Zhiyuan.

Edge Weekly quoted Kinsteel managing director Tan Sri Pheng Yin Huah as saying then : “We need a professional partner who can bring operational changes to Perwaja. We are still in discussion on the share placement. If Zhiyuan emerges as the largest shareholder, it is actually good for Kinsteel.”

Perwaja shares had risen 240% this year versus Kinsteel and the FBM KLCI's 3% gain.