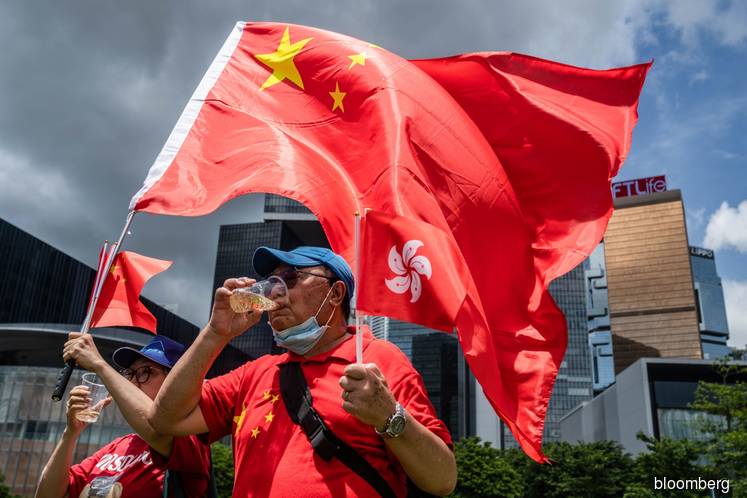 HONG KONG (June 30): Hong Kong was bracing for China to hand down sweeping security legislation, as the U.S. took steps to roll back special trading privileges that help maintain the former British colony’s status as an international commercial hub.

President Xi Jinping signed an order promulgating the legislation, one of the final steps need to put it into effect after its approval earlier by Chinese lawmakers. Hong Kong’s leader, Chief Executive Carrie Lam, said in the evening that the measure would take effect later Tuesday.

The national security law was expected to take effect by Wednesday — the 23rd anniversary of the city’s return to China from British rule, and a day usually marked by mass protests. Prime Minister Boris Johnson said the U.K. was “deeply concerned” about the law. The Civil Human Rights Front, which has organised some of Hong Kong’s biggest pro-democracy demonstrations, was expecting an appeals hearing later Tuesday against a police decision to ban the march. Some activists announced that they would march anyway.

Here’s the latest (all times local):

The U.K. prime minister said his country was “deeply concerned” about China’s decision as he spoke to reporters in central England. “We will be looking at the law very carefully, we will want scrutinize if it’s in conflict with the Joint Declaration between the U.K. and China,” he said.

Foreign Secretary Dominic Raab said in an emailed statement earlier Tuesday that the move to pass the law would be a “grave step.”

Hong Kong’s government will complete necessary procedures as soon as possible to publish the legislation in the government gazette, in order for it to take effect later Tuesday, leader Lam said in an evening statement.

The statement didn’t include the full text of the law.

China’s top agencies overseeing Hong Kong affairs released separate statements supporting the law. The Hong Kong and Macau Affairs Office said the legislation provided a strong guarantee for the long-term stability of “one country, two systems” and a turning point for Hong Kong to return to the right track.

The Chinese Liaison Office, meanwhile, said Beijing had “made careful evaluation and ample preparation for situations that may arise in the process of implementing” the law.

Xi signed an order promulgating the law, the official Xinhua News Agency said, one of the final steps necessary to put the measure into effect. The National People’s Congress Standing Committee — China’s top legislative body — had earlier voted behind closed doors to adopt the legislation and write it into Hong Kong’s Basic Law.

“The law and the decision were passed unanimously, which shows the common will of all people of the country, including Hong Kong people,” NPC Chairman Li Zhanshu, the Communist Party’s No. 3 leader, said in a speech. He said the law was compatible with Hong Kong’s legal system and would “punish extremely few while protecting the majority.”

The only step remaining was for the law to be published in Hong Kong’s official gazette. Details of the legislation had still not been released.

Lam told the United Nations Human Rights Council that the law was urgently needed after the city was “traumatised by escalating violence fanned by external forces” during the unrest last year. In her remarks via video to the Geneva-based body, Lam said the measure wouldn’t impact the city’s judicial independence.

“For those foreign governments or politicians raising objections to the legislation, one could only lament the ‘double standards’ they are adopting,” Lam said. “I urge the international community to respect our country’s right to safeguard national security and Hong Kong people’s aspirations for stability and harmony.”

Government supporters drink sparkling wine as they wave Chinese and Hong Kong Special Administrative Region flags to celebrate the passage of a national security law in Hong Kong, on June 30.

Hong Kong stocks erased their gains in afternoon trading as investors awaited details of a controversial national security law passed by China’s legislature. Property companies were among the biggest losers on the MSCI Hong Kong, which gave up a gain of almost 1% to trade little changed.

“The whole market is waiting for the details of the law,” said Steven Leung, executive director at UOB Kay Hian Ltd. “Some investors might worry that the details will be too tough.”

Authorities will be able to apply suspects’ actions over the past two years to build some criminal cases under the law, Radio Television Hong Kong reported, citing people familiar with the discussions. The report will fuel concerns among protesters that actions they took during last year’s unrest could be used against them, even though they weren’t illegal at the time.

Some pro-democracy activists, including Civil Human Rights Front vice-convenor Figo Chan and lawmakers Wu Chi-wai and Eddie Chu — called for a peaceful march from Causeway Bay to Central on Wednesday in opposition to the security law. CHRF, which organized some of last year’s biggest historic demonstrations, is set to attend an appeal hearing on its planned July 1 march Tuesday evening. The activists said they would rally, regardless of the result.

Tam Yiu-chung — Hong Kong’s sole representative to the NPC Standing Committee — confirmed at a briefing that fellow Chinese lawmakers had passed the security law. He said another vote was still required for the law to be added to Hong Kong’s Basic Law, the city’s mini-constitution.

Tam sidestepped a question about whether the law would be applied retroactively, something that’s raised concerns among the opposition, saying the legislation was intended to have a deterrent effect. He also said it wouldn’t include death penalty, which Hong Kong abolished in 1992.

The pro-independence Hong Kong National Front announced on Facebook that it would cut Hong Kong members and end local operations. The group counts Baggio Leung — a pro-independence activist ousted from the city’s Legislative Council in 2016 for mishandling his oath of office — as a spokesperson. The group, which has offices in Taipei and the U.K., said it would continue advocating for independence from outside Hong Kong.

Pro-democracy activist Joshua Wong announced on Facebook that he would withdraw from Demosisto, the Hong Kong political party he founded, and continue activism in his personal capacity. While Wong didn’t explain why he was quitting the group, he said activists faced a grim fate after the security law’s passage, citing concerns the measure could lead to in prison or even extradition to the mainland.

Other founding members of the group including Nathan Law, Agnes Chow and Jeffrey Ngo, also announced their withdrawal from the party.

The Hong Kong government planned to publish the national security law Tuesday for it to take effect the same day, the Ming Pao newspaper reported, without citing anyone. The Chinese government in Beijing will hold a news briefing later Tuesday to discuss the decision, Ming Pao said.

U.S. Secretary of State Michael Pompeo hit back at Beijing’s imposition of visa restrictions for Americans who “behave badly in Hong Kong affairs,” saying it was China’s crackdown on the former British colony that prompted Washington to “retool its relationship with the territory.”

“The Chinese Communist Party’s threats to retaliate by restricting visas for U.S. citizens exposes once again how Beijing refuses to take responsibility for its own choices,” Pompeo said in a statement.

“The National People’s Congress is still in a meeting and on the agenda today there’s the relevant national security law for Hong Kong,” Hong Kong Chief Executive Carrie Lam told reporters at a weekly briefing minutes after news of the law’s passing broke. “At this moment it is inappropriate for me to respond to any questions or give any explanations.”

Lam — who has publicly defended the measure — did acknowledge there were many concerns about the legislation. She also said she wasn’t scared by the threat of U.S. sanctions. “We are not going to be deterred by such actions,” she said.

Hong Kong media including Now TV, the South China Morning Post and others, reported that China’s top legislative body — the National People’s Congress Standing Committee — had unanimously approved the security law for Hong Kong at the end of a three-day meeting in Beijing. Much of the legislation remained secret and details weren’t immediately released.

The Trump administration made it harder to export sensitive American technology to Hong Kong, suspending regulations allowing special treatment to the territory over dual-use technologies like carbon fiber used to make both golf clubs and missile components.

“With the Chinese Communist Party’s imposition of new security measures on Hong Kong, the risk that sensitive U.S. technology will be diverted to the People’s Liberation Army or Ministry of State Security has increased, all while undermining the territory’s autonomy,” U.S. Commerce Secretary Wilbur Ross said, providing little detail on specific impacts.