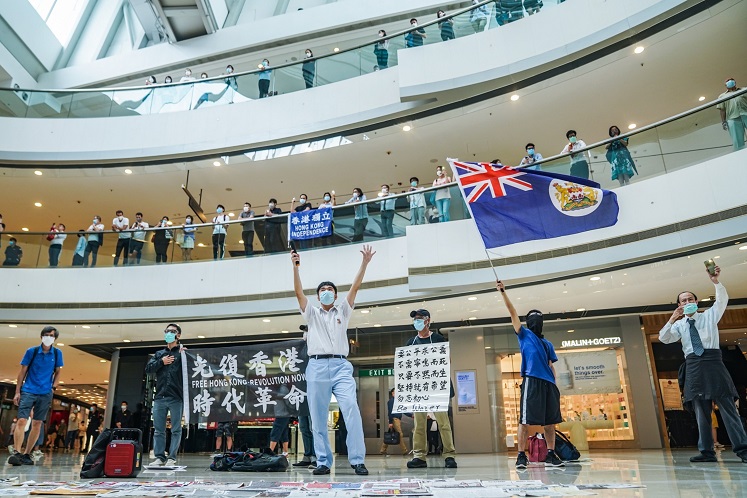 A demonstrator waves a colonial-era Hong Kong flag during a protest at the IFC shopping mall in Hong Kong on May 29. (Photo by Bloomberg)

HONG KONG (May 31): Phyllis Lam has lived in Hong Kong for 42 years. It’s where she was born, went to school, met her husband and planned to raise her two children.

But like a growing number of Hongkongers disillusioned by China’s tightening grip on the city, Lam now feels she has little choice but to leave. “I have no confidence in Hong Kong’s future,” she said in an interview. “I have two young kids, so I have to plan for them.”

For many in Hong Kong who’ve long feared an erosion of their freedoms under Chinese rule, last week marked a tipping point. Spurred to action by Beijing’s decision to impose controversial national security legislation on the former British colony, residents have been flooding migration consultants with questions on how to move their families overseas.

“We get an inquiry every 2 to 3 minutes,” said Gary Leung, chief executive officer of Global Home, a property and migration consultancy. The firm’s client requests has swelled to about 20 times normal levels, with Taiwan and Europe among the most asked-about destinations, Leung said.

With many countries still enforcing travel restrictions to fight the coronavirus, it’s too early to gauge how many Hongkongers will ultimately move out. But consultants say the odds of an eventual exodus are growing as lawmakers from the UK, the US and Taiwan signal they may ease entry requirements for some Hong Kong citizens.

A wave of emigration could erode Hong Kong’s attractiveness to multinational companies, hundreds of which rely on local talent to drive their growth across the Greater China region and the rest of Asia. The American Chamber of Commerce in Hong Kong has warned that retaining top-tier employees in the city may become more difficult.

Signs that more Hongkongers are planning to leave have been increasing since last year, when a now-scrapped extradition bill sparked mass protests and violent clashes with police in the heart of the city’s central business district.

While Hong Kong doesn’t publish high-frequency immigration statistics, applications for good citizenship cards — which certify a person doesn’t have a criminal record — serve as a proxy because they’re often needed to apply for foreign visas. The monthly number of applications averaged 2,935 from June 2019 to April 2020, a 50% jump versus 2018.

It’s not the first time the city has faced the prospect of a brain drain. An estimated 300,000 people left between 1990 and 1994, fearing Hong Kong’s handover to China from Britain would destroy the city’s civil liberties and capitalist system. Yet predictions of Hong Kong’s demise ultimately proved unfounded, with its status as Asia’s premier financial hub only becoming more entrenched over the following two decades.

Hong Kong Chief Executive Carrie Lam said on Friday that the security law will only target “an extremely small minority of illegal and criminal acts” and that the “life and property, basic rights and freedoms of the overwhelming majority of citizens will be protected.” China’s central government has made similar remarks in the past week.

Jolie Lo, an administrative executive, is among Hongkongers who plan to stay. She wants to be close to her aging parents and is wary of the challenges she might face overseas.

“I may encounter other problems such as racial discrimination,” said Lo, who has studied in New York and worked in Beijing. “I won’t say I regret my decision to come back to Hong Kong. Since we are here now, we should just try our best to preserve our homes.”

Others see emigration as their best option. David Hui, managing director at Centaline Immigration Consultants (HK) Ltd, said his firm is now receiving as many as 100 inquiries a day from Hongkongers interested in moving to countries including Australia, the UK and Canada. Taiwan, Malaysia and Portugal are also becoming increasingly popular. “The national security law is definitely a push factor,” Hui said.

Critics of China’s Communist Party worry that it will use the law to crack down on dissent and undermine the “one country, two systems” principle that has kept Hong Kong’s judiciary separate from the mainland’s since the 1997 handover. In a survey of 9,477 pro-democracy supporters last week by the Hong Kong Public Opinion Program, 96% said they opposed the law. Among those who said they weren’t pro-democracy, 29% opposed it and 62% supported it.

“Now I fear censorship could be even more serious in Hong Kong,” said Ming, 30, who works in the art world and declined to give her surname, citing the sensitivity of the subject. “I don’t see a future here anymore, so it’s time to look for options.”

Phyllis Lam and her husband, who are both holders of British National (Overseas) passports, haven’t decided yet where they’ll move. Canada is high on the list, but their top choice is the UK The country’s Home Office has said it may open a path to citizenship for almost 3 million Hong Kong residents who have BN(O) status.

“In any case, we will send the kids away,” Lam said. “We don’t think the current environment in Hong Kong is good for them.”