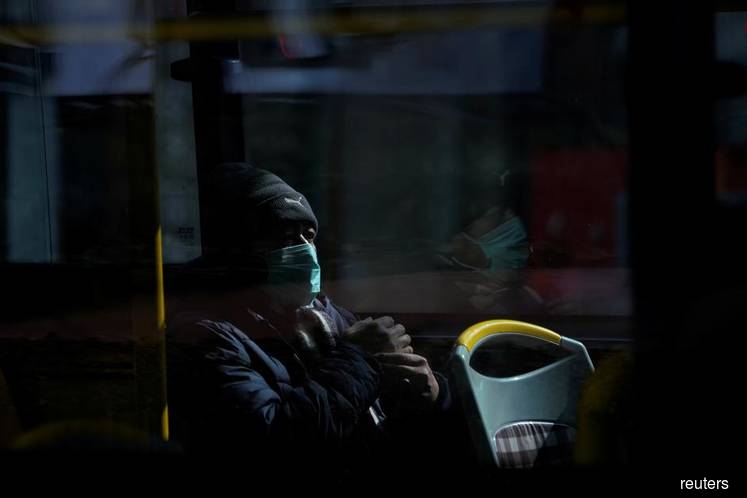 A man wears a mask on a bus in downtown Shanghai, China, on Feb 12, 2020, as the country suffers the consequences of the 2019 novel coronavirus (Covid-19) outbreak since December 2019. (Photo credit: Aly Song/REUTERS)

BEIJING/SINGAPORE (Feb 12): China reported on Wednesday, its lowest number of new 2019 novel coronavirus (Covid-19) cases in two weeks, bolstering a forecast by Beijing's senior medical adviser for the outbreak in the country to end by April — but fears of further international spread remained.

The 2,015 new confirmed cases took China's total to 44,653. That was the lowest daily rise since Jan 30 and came a day after epidemiologist Zhong Nanshan said the epidemic should peak in China this month, before subsiding.

His comments gave some balm to public fears and to markets, where global stocks surged to record highs, on hopes of an end to disruption in the world's second largest economy.

However, the World Health Organization (WHO) has likened the epidemic's threat to terrorism and one expert said while it may be peaking in China, this is not the case beyond.

"It has spread to other places where it's the beginning of the outbreak," Dale Fisher, head of the Global Outbreak Alert and Response Network coordinated by the WHO, said in an interview in Singapore. "In Singapore, we are at the beginning."

Singapore has 50 cases including one found at its biggest bank DBS on Wednesday, that caused an evacuation at head office.

Hundreds of infections have been reported in dozens of other countries and territories, but only two people have died outside mainland China: One in Hong Kong and another in the Philippines.

China's latest figures also showed the number of deaths on the mainland rose by 97 to 1,113 by the end of Tuesday.

But doubts have been aired on social media about how reliable the data is, after the government last week amended guidelines on classification.

The biggest cluster outside China is on a cruise ship quarantined off Japan's Yokohama port, with about 3,700 people on board, of whom 175 have tested positive.

There was a happy ending in sight for another cruise ship, the MS Westerdam, which Thailand, Japan, Taiwan, Guam and the Philippines had refused to let dock over fears one of its 1,455 passengers and 802 crew may have the virus.

Cambodia finally agreed to let it land, the Holland America Line said. Passengers have been whiling away time, playing chess and doing puzzles.

"The staff has tried to bolster spirits but you can only play so many games of trivia," American passenger Angela Jones told Reuters in a video. "I've asked others who say they are napping a lot".

China's state news agency Xinhua called the epidemic a "battle that has no gunpowder smoke" and chided some officials for "dropping the ball" in some places.

There was no lack of zeal, however, in the city of Chongqing where prosecutors brought charges against a man who strapped on firecrackers, doused himself with gasoline and held up a lighter to defy a ban on public gatherings.

He had planned a birthday banquet, Xinhua said.

The outbreak has been named COVID-19 - CO for corona, VI for virus, D for disease and 19 for the year that it emerged. It is suspected to have originated in a market illegally trading wildlife in Hubei province's capital of Wuhan in December.

The city of 11 million people remains under virtual lockdown as part of China's unprecedented measures to seal infected regions and limit transmission routes.

Moves by Washington and others to curb visitors from China have offended Beijing, which says they are an over-reaction.

A Xinhua commentary chided some Western media for "racist reporting" on the coronavirus and ignoring "the unswerving efforts and huge sacrifice China and its people have made".

"Just as the H1N1 influenza outbreak in the United States in 2009 should not be called an 'American virus', the NCP (novel coronavirus pneumonia) is neither a 'China virus' nor 'Wuhan virus'," it said, in a reference to the 2009 swine flu pandemic.

With companies laying off workers and supply chains disrupted from the car industry to smartphones, China's economy is taking a big hit. ANZ Bank said first quarter growth may slow to between 3.2-4.0%, down from a projection of 5.0%.

However, the troubles were also triggering innovation.

One company in southwestern China built a tunnel to spray employees with disinfectant, while a steamed bun shop in Beijing is using a wooden board to serve customers and avoid contact.

The latest big event to be cancelled was Formula One's Chinese Grand Prix, originally set for Shanghai on April 19.

Organisers of a global mobile conference in Barcelona were also mulling whether to pull the plug, two sources said, after several European telecom companies pulled out due to the coronavirus.