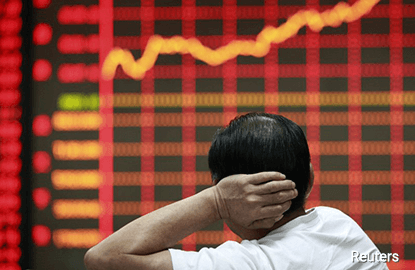 SHANGHAI (July 2): China's securities regulator has relaxed rules on using borrowed money to speculate on stock markets, the latest in a flurry of government measures aimed at stemming two weeks of panic selling that is posing a growing risk to the world's second-largest economy.

Just a few weeks ago, authorities were cracking down on riskier margin financing, which had helped Chinese markets more than double in a year.

But a more than 20 percent plunge in share prices in two weeks have seen an abrupt shift as the government works to avert a crash in the world's most volatile stock market.

China Securities Regulatory Commission (CSRC) said late on Wednesday that it would cancel a rule requiring investors make additional guarantees if their margin ratio reaches 130 percent or else face forced liquidation of their shares.

The regulator said brokerages will also be allowed to roll over margin trading contracts with clients.

Brokerages whose margin trading volumes were currently above permitted levels could maintain current levels but further increases are disallowed, it said.

"This is the right dose of medicine," Hong said.

"The slump was largely driven by margin calls, so if brokerages don't force liquidation  the market slide should be stemmed at least for now."

In a separate statement reported by the official Xinhua news agency, the CSRC also said it would allow stock brokerages to issue or transfer short-term corporate bonds via stock exchanges and trading systems between institutions to widen their funding channels.

The sudden market slide was likely a contributing factor to the central bank's decision to cut interest rates last weekend for the fourth time since November.

But fears of a deeper plunge and uncertainty over policy has fueled wild volatility, with prices at times swinging in a 10-percent range in a single day as many traders desperately try to unload their positions while others, possibly state linked, swoop in to buy cheaper stocks, believing Beijing will not allow a market crash to threaten the already slowing economy.

On Wednesday, Chinese stocks tumbled by 5 percent, surrendering many of Tuesday's sharp gains, as investors took advantage of the rebound to reduce their leveraged positions.