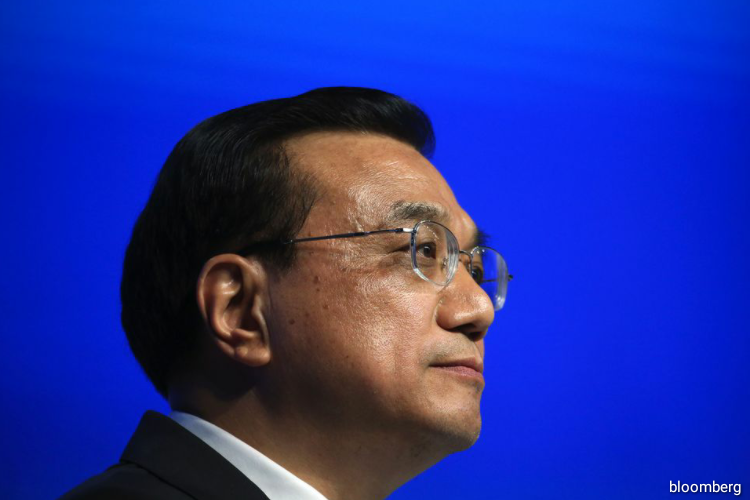 “We have not set a specific target for economic growth this year,” Li said, speaking in the Great Hall of the People. “This is because our country will face some factors that are difficult to predict in its development due to the great uncertainty regarding the Covid-19 pandemic and the world economic and trade environment.” (Photo by Bloomberg)

(May 22): The Chinese government abandoned its decades-long practice of setting an annual target for economic growth amid the storm of uncertainty unleashed by the coronavirus pandemic, and said it would continue to increase stimulus.

Speaking at the National People’s Congress in Beijing on Friday morning, Premier Li Keqiang’s delivered an annual policy address that instead laid out a renewed focus on maintaining employment and investment. Against a backdrop of escalating tensions with the U.S., Li said Beijing remains committed to implementing the terms of the ‘phase one’ trade deal.

With more than $500 billion in infrastructure bonds to be issued this year and more monetary easing on the horizon, China is trying to cement a fragile domestic recovery without indulging in the kind of debt blowouts seen in the U.S. and Europe. The world’s largest exporter is therefore still reliant on other countries reining in the pandemic and a reboot of global trade.

“We have not set a specific target for economic growth this year,” Li said, speaking in the Great Hall of the People. “This is because our country will face some factors that are difficult to predict in its development due to the great uncertainty regarding the Covid-19 pandemic and the world economic and trade environment.”

The shifting away from a hard target for output growth breaks with decades of Communist Party planning habits and is an admission of the deep rupture that the disease has caused. At the same time, Li gave a precise figure for the targeted budget deficit, widening it to more than 3.6% of gross domestic product. Including the issuance of special bonds, that brings a broader measure of the deficit to more than 8%, according to Bloomberg Economics.

Li’s address also contained announcement of plans to impose a national security law in Hong Kong, a development that pushed stocks there lower. The yuan was steady while the details on bond issuance helped drive yields on benchmark Chinese 10-year government bonds down to 2.625%, heading for the lowest in two weeks.

“Setting a target in such an uncertain economic environment would have been risky. Abandoning the decades-long tradition relieves the government of the straight jacket the annual target placed on economic policy. The challenge now will be to effectively guide expectations in the absence of the GDP target.”

Li said the government is setting a target for urban job creation of over 9 million jobs, lower than the 2019 target of around 11 million, and a target for the urban surveyed unemployment rate of around 6%, higher than 2019’s goal, according to the document.

The government’s official measures don’t capture the full extent of unemployment caused by the pandemic, which has hit both manufacturing and services hard. With jobs and income growth vital for the unelected Communist Party’s political legitimacy, stabilizing employment has become Li’s first priority.

“We will make every effort to stabilize and expand employment,” Li said. “We will strive to keep existing jobs secure, work actively to create new ones, and help unemployed people find work.”

Reflecting recent controversy over the ‘phase one’ trade deal with the U.S. signed earlier this year before the pandemic broke out, Li said China will work with the U.S. to implement the agreement.

The budget deficit target was widened to more than 3.6% of GDP, implying a significantly larger shortfall than 2019’s target of 2.8%. Greater spending on efforts to restart the economy and control the spread of the coronavirus will be funded by the issuance of 1 trillion yuan ($141 billion) in sovereign debt.

To help finance infrastructure investment, local governments will issue 3.75 trillion yuan in local special bonds this year. That is an increase from 2019’s quota of 2.15 trillion. Economists had forecast an issuance of up to 4 trillion yuan.

The government’s language on monetary policy was kept basically unchanged, with the stance remaining “prudent,” as well as “flexible” and “appropriate.” The English language report also said that new monetary policy tools would be developed to “directly stimulate the real economy.”

“It is crucial that we take steps to ensure enterprises can secure loans more easily and promote steady reduction of interest rates,” according to the report. Li added that money supply will be guided “significantly” higher this year and that reserve ratios and interest rates will continue to be cut.

Key leaders sat in two rows behind Li’s podium, well spaced and without face masks. Officials behind were more closely packed and wearing masks, as were the hundreds listening in the hall. The Congress represents the centerpiece of China’s political calendar, though it has a rubber-stamp role. The meeting was delayed more than two months by the virus shutdowns.

Li detailed measures including continued implementation of VAT cuts, and a further 500 billion yuan in tax and fee reductions. The target for consumer price inflation was set at 3.5%, higher than the usual ceiling and a reflection of continued high food-price gains.

Analysts said that while more stimulus was announced, the government’s ambitions for growth remain limited given the dangers of another run up in debt. China borrowed heavily to stabilize the economy after the 2008 crisis, and is taking a markedly different tack this time. At the same time, rising unemployment may force the government’s hand.

“I think the central government would like local governments to play a much more active role in relieving domestic unemployment and boosting domestic consumption,” Michael Pettis, a finance professor at Peking University, said Friday on Bloomberg Television. “The problem is, local governments are indebted up to their eyebrows. There’s really not much room for them significantly to increase debt.”