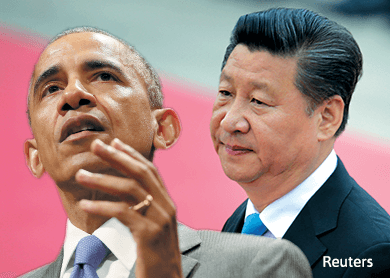 HOUSE Democrats who’ve been interfering with President Barack Obama’s ability to negotiate the Trans-Pacific Partnership (TTP) are missing something very important: The trade deal isn’t primarily significant because of the economy.

It matters because it’s part of the broader American geostrategic goal of containing China — which pointedly hasn’t been invited to join the TPP. In the new cool war, China’s rising economic influence is giving it greater geopolitical power in Asia.

The TPP is, above all, an effort to push back on China’s powerful trade relationships to reduce its political clout. By weakening Obama’s ability to pursue it, congressional Democrats are unintentionally weakening the US side in the cool war.

It’s easy to miss the geopolitical importance of the TPP, because in the cool war, economics and politics sometimes appear to be operating in unrelated spheres. Consider that the US-dominated security regime in Asia since World War II has depended on a “hub and spokes” arrangement with the United States at the centre and allies such as Australia, Japan, South Korea and Taiwan all connected to the US and only very loosely to one another.

During the Cold War, it would’ve been almost unimaginable for countries belonging to the Eastern bloc or the Western allies to have closer economic ties to the other side than to the side on which they were dependent for their security.

Trade between communist and capitalist worlds was highly constrained and limited. In the zero-sum logic of the Cold War, it made little sense for either side to strengthen the enemy by trading with that enemy’s allies.

The rules of the cool war are completely different — which is why it’s cool, not cold. It’s not just that US security allies trade abundantly with China. The US does, too: It’s still the largest export market for Chinese goods. And the government of China is still the single-largest foreign holder of US Treasury bonds.

Given that the defining feature of the cool war is that it’s possible to trade extensively with your geostrategic opponents, you can see why the connection between the TPP and the cool war might be easy to miss.

But in fact, the TPP was conceived as a crucial tool in the next stage of the cool war. China has been expanding its security position within Asia, growing its military budget at more than 10% a year and staking claims to islands both real and imaginary, or newly constructed.

In all this, China is using its close economic relationship with its neighbours as leverage to build its geopolitical position. Its ultimate goal is to displace the US as the regional hegemon. President Xi Jinping’s slogan of the “Chinese dream” requires nothing less.

The TPP aims to reduce some of China’s geopolitical resurgence by damping down the extent of China’s regional trade dominance. China itself has a proposed regional trade alliance, the Regional Comprehensive Economic Partnership (RCEP). The TPP is a direct, competitive counterpart to the RCEP.

China recently opened negotiations for a new Asian Infrastructure Investment Bank (AIIB) — another cool war move to deepen China’s regional economic leadership. Despite US pressure not to participate, the Chinese got applications from essentially all of its regional security allies. Even Taiwan signed up, a pretty remarkable act for a country whose existence basically depends on the US.

The AIIB fiasco shows how powerful China’s position on the economic side of the cool war really is. It’s hard to contain a nation that can tempt your allies to break ranks with you — and knows your leverage is inadequate to stop them.

Yet the overarching goal for the US in the cool war is and must continue to be a form of containment.

That’s the whole point of US military presence in the region. Yes, we’re protecting our allies from being dominated by China — but we’re doing so by functioning as the dominant regional military actor.

But the US needs a range of tools beyond the military to contain China. A trade deal that excludes China is a good way to do it.

And progressives in principle should like this approach. After all, one reason China can’t join the TPP is that it isn’t about to allow labor unions or other progressive institutions that the TPP requires of its members.

Indeed, the TPP has been designed precisely to include free or at least freer countries than China — and to encourage greater freedom in others, like Vietnam.

The TPP uses trade in the service of geopolitics. It will make the US stronger in the cool war. And that’s an issue progressive Democrats should care about. — by Noah Feldman, Bloomberg View