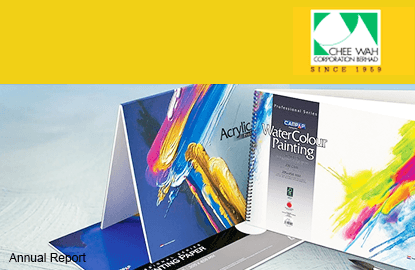 According to Bloomberg data, the shares were moved in one block at RM1.18 per share, 15.11% lower than the stock's closing price of RM1.37 today.

Based on Bloomberg data, as at Dec 22, Chee Wah managing director and co-founder Say Beng was the largest shareholder, with a 17.35% stake, while ANB Equity Sdn Bhd and Say Khai owned 14.35% and 10.31% in the company respectively.

Chee Wah was picked as a Stock with Momentum on theedgemarkets.com on Aug 12, when it was trading at about 51 sen per share, and again on Oct 20, when it hit 72 sen.

Its products are sold under the established brands 'CAMPAP' and 'FOREST'. For FY2015, exports accounted for 71.3% of sales, up from 62.5% in the previous year.

Due to strong sales demand in export markets and the strengthening US dollar, Chee Wah registered a strong performance in the financial year ended June 30, 2015 (FY15), when revenue grew 7.2% to RM95.3 million while net profit grew 21-fold to RM2.9 million.