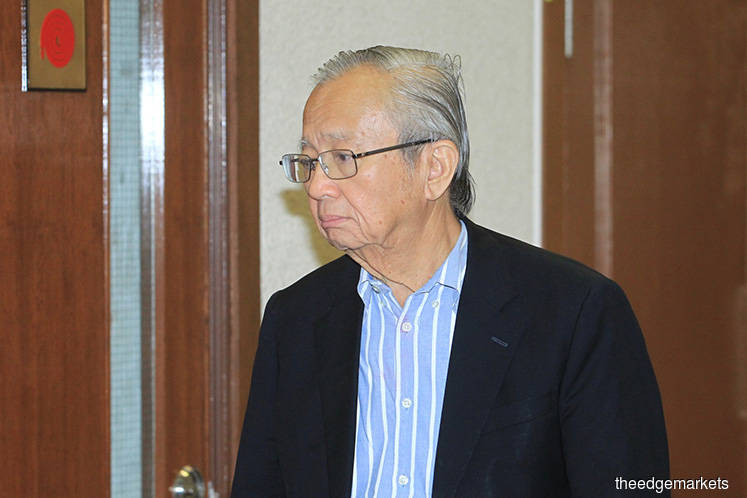 Cheah told the court that Low was ‘never punctual’ and would ‘set up an appointment at 7am but arrived at one in the afternoon’. Photo by Shahrin Yahya

A BlackBerry Messenger (BBM) conversation sourced from former AmBank relationship manager Joanna Yu’s smartphone underlined a chat between her and her former boss Cheah in 2013, in which Yu said she had sorted out the final tranche of US$620 million transferred out from Najib’s bank account back to its benefactor.

“You must be relieved,” replied Cheah, who was a non-executive director then, as the BBM chat showed.

However, Cheah, who was in the witness stand for the second day, denied he was involved with the US$620 million transfer.

He noted that he was in a non-executive role at the time. “I am not involved with operations… I go to board meetings. That’s it,” he said.

Defence counsel Harvinderjit Singh, in response, said: “I don’t think Joanna Yu would have done things [with Najib’s AmBank accounts] without the comfort of having you, who was managing director, in the know.”

To recap, in April 2012, Cheah retired as managing director of AMMB Holdings Bhd, which wholly owns AmBank Bhd. He then became adviser to the banking group’s chairman Tan Sri Azman Hashim, one of the founders of AmBank group, and he continued to serve on the boards of AmBank, according to AMMB’s annual report 2012.

Citing an instruction letter that was carbon copied to Cheah, Harvinderjit pointed out that Najib had intended to transfer out the “unused donations” of US$620 million in a single tranche.

During re-examination, Cheah reaffirmed that he was present in Najib’s Jalan Langgak Duta residence in 2011, when the former premier signed documents to open the three AmBank accounts in question, namely forms for current account, savings account and credit card.

This was, however, in contrast with Cheah’s cross-examination, when he declined to confirm if the forms were signed at the same time, after Harvinderjit pointed to the discrepancies between the pen used in Najib’s signatures in the credit card form and the other two forms.

Cheah helped Najib open the accounts in 2011 upon request by Azman.

Cheah had told the court that Najib had informed that the accounts were formed to receive donations from Saudi Arabia, and that he had informed then-Bank Negara governor Tan Sri Zeti Aziz about this — and that both he and Zeti agreed the matter must be conducted in accordance with Malaysia’s banking regulations.