Chamber honours the best in business at anniversary bash 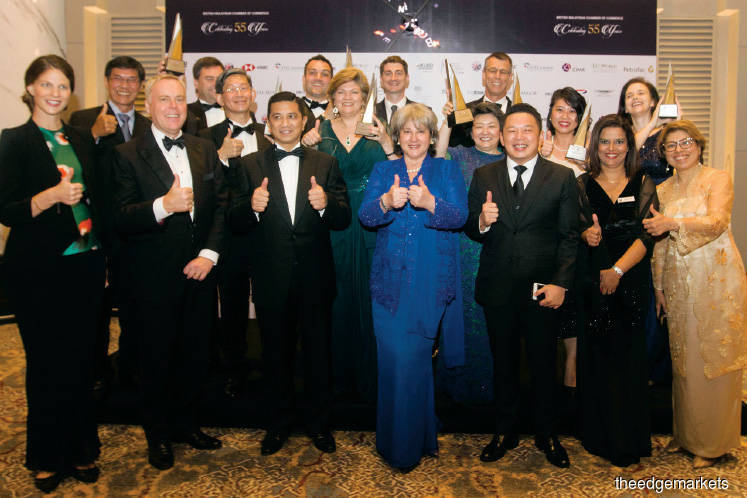 The glittering, high-profile awards ceremony that was held together with BMCC’s 55th anniversary celebration sought to recognise the best of individuals and companies who contributed to the advancement of bilateral trade between the UK and Malaysia.

The event was held at a ballroom in a luxurious hotel here where over 500 people representing some of the most excellent business enterprises and organisations across both the UK and Malaysia packed the venue.

Besides the two winners, five other prestigious awards were also given out.

Alexander Dennis Ltd — Terberg Tractors Malaysia Sdn Bhd was named the most Outstanding UK-Malaysia Partnership for bringing significant value-creation to the economy through the synergy, while Tesco Stores (Malaysia) Sdn Bhd was hailed the UK Investor of the Year in Malaysia for its track record of investment in Malaysia having built on its success in the UK, bringing mutual economic benefits to both countries.

Shell Malaysia Ltd took home the Investing in People Award for its commitment to upskilling workforce, while Dyson Manufacturing Sdn Bhd and not-for-profit organisation The Lost Food Project emerged as winners under the Technology and Innovation category.

With a 7,000 headcount in 110 countries and territories, British Council was recognised with the Diversity Award for the international opportunities it creates for the people of the UK and other countries.

During his opening speech, Sill said the launch of the BMCC Awards is not just relevant, but necessary, as the BMCC aspires to become the axis for the coming together of British and Malaysian business.

“With the UK preparing to open its ties with the world post-Brexit, and Malaysia’s new era beginning under the auspices of the new government, our BMCC business community remains active and engaged, continuing to develop value-adding initiatives and innovate in this time of transformation, as a sound and robust business environment is so critical to both our nations at this juncture.

“The number of nominations we’ve received exceeded our expectations. The recipients of our awards tonight have demonstrated beyond doubt an outstanding capacity to envision a direction and steer towards it. We look forward to many more Business Excellence Awards (BEA) in the years to come,” Sill added.

Set up in 1963, the BMCC has taken on the task of advancing bilateral trade between the UK and Malaysia. It has helped the UK become a leading investor in Malaysia with an estimated cumulative investment of £20 billion over the last 30 years.

Malaysia is now the UK’s second-largest trading partner in Asean.

The Edge Malaysia is the official print media partner of the BEA, while business station BFM 89.9 is the official radio partner. The Institute of Chartered Accountants in England and Wales, British Airways, and British carmakers Aston Martin and Mini are also partners for the event.