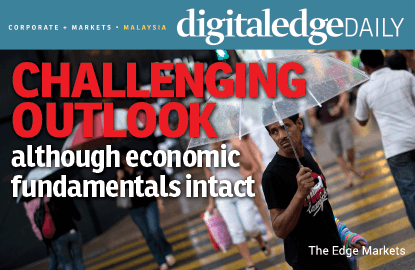 KUALA LUMPUR: Malaysian Institute of Economic Research’s (MIER) statistics for the second quarter (2Q15) have painted a challenging picture of the Malaysian economy — consumers remain low-spirited, manufacturers lack   confidence in business prospects and jobs are harder to come by.

Other than a slight pickup in MIER’s 2Q15 residential property index, all the other indices used to track the performance of the domestic economy fell. Retail trade was lethargic, confidence in the tourism sector shrank, and consumer confidence is currently languishing in a “firm recessionary mode”.

“We are not yet showing signs of a recession as the country’s economic fundamentals are still looking good despite moderating gross domestic product (GDP) growth.

“Having said that, there is a need for caution as fundamentals can be rapidly eroded, as it [boils] down to internal and external forces,” said MIER executive director Dr Zakariah Abdul Rashid in the institute’s 2Q15 national economic outlook briefing yesterday.

He added that MIER would revise its GDP growth forecast, currently at 4.8%, should its statistics for the subsequent quarters of 2015 continue to show declines.

Zakariah pointed out that besides falling crude oil prices affecting the ringgit amid lower oil and gas revenue, the erosion of confidence in the economy had caused foreign investors to wait cautiously on the sidelines due to political uncertainty in the country.

“The political situation is complex — from the lack of confidence in how 1MDB (1 Malaysia Development Bhd) is handled to the Cabinet reshuffle — these have put pressure on investors’ confidence and the ringgit,” he said during MIER’s 13th national economic briefing.

However, Zakariah pointed out that if the Cabinet reshuffle results in a more effective administration, it would help to restore confidence in the economy.

“A short-term reaction in the stock market and an increase in foreign direct investment in the longer term will be reflected if the new Cabinet delivers on its plans, [thereby] resulting in greater confidence via a stable political environment,” he noted.

The speed of the depreciation of the ringgit, which fell to 3.8523 against the US dollar yesterday — a 16-year low — has alarmed the Malaysian public, sparking fears that the value of the ringgit will erode beyond 4.0 to the US dollar.

“The level of international reserves has also been falling, and the fear is that it will breach the psychological threshold of US$100 billion,” said Zakariah, adding that a further deterioration may trigger a credit rating downgrade.

Since the ringgit is on a managed float regime, Malaysia might also risk not having sufficient international reserves to back the ringgit when it needs reserves, he added.

In July 2005, Malaysia scrapped the ringgit’s peg to the greenback and adopted the managed float system, with its value determined by economic fundamentals and monitored by Bank Negara Malaysia against a currency basket to ensure it remains close to fair value, to avoid speculation on the exchange rate.