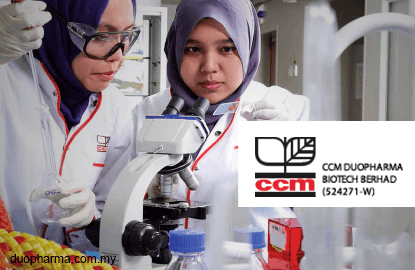 For the full financial year, CCM posted net profit of RM27.81 million, down 22.1% from RM35.70 million in FY15. The group attributed the decline to changes in product mix and increase in production costs due to foreign exchange (forex), which in turn resulted in lower gross margin.

CCM expects demand in the pharmaceutical industry to remain stable although it noted that business momentum will continue being pressured by the weak ringgit.

"Demand in pharmaceutical industry is expected to remain stable for [the] current financial year, despite business momentum facing increasing challenges arising from weakened ringgit, which affects our production and operational costs," it said.

Additionally, persistent forex volatility and uncertainties in the economy may further put pressure on its manufacturing margins, the group said.

"In view of [the] current challenging environment and barring further unforeseen development, the group is cautiously optimistic to achieve a satisfactory performance for [FY17]," it added.