Malaysian Real Estate
Investment Trusts
Maintain “neutral”: The outlook for Real Estate Investment Trusts (REITs) looks brighter in 2015, as earnings start to normalise after being hit by higher utility and assessment expenses in 2014. Some  REITs are likely to see some earnings boost from either the injection of new assets or the extensive refurbishment of existing portfolio assets.

We do note, however, that with the goods and services tax (GST) kicking in in April 2015, future acquisitions could prove to be challenging. This is because all purchases of commercial assets will be subjected to the 6% GST, potentially causing assets’ yields to become less attractive.

REITs could take a breather next year, given that the risk of further overnight policy rate hikes has been substantially reduced as economic growth weakens. This should be favourable to REITs, given the steady yield spread and stable interest costs on borrowings.

We believe that the sector’s average cost of debt will stay at around the 4% to 5% levels. We also expect REITs’ gearing levels to remain stable going forward. We believe retail REITs will continue to outperform their peers, given their relatively stable average annual rental rate growth of 5% to 7% vis-a-vis 2% to 3% growth in the industrial segment, and flattish annual growth for the office sector. The turnover rent portion only accounts for less than 5%, as most retail REITs’ rental incomes are fixed. As such, any short-term slowdown in sales should have minimal impact on the overall REITs’ earnings.

We also believe that the possible cannibalisation effect from the incoming supply of new retail space will be minimal, as malls under REITs are typically more mature and have well-established positions in the market given their sizes.

According to our house view, private sector consumption is expected to register a decent year-on-year growth of 6.8% for 2014, with a slower growth of 5.2% in 2015. Our 2015 growth forecast is conservative compared with Retail Group Malaysia 2015’s growth forecast of 6%.

In general, all the office REITs continue to guide for flattish rental growth going forward in a bid to retain tenancies.

We note that between 1Q09 and 1Q14, the compound annual growth rate of the rental rates of Kuala Lumpur’s investment-grade offices stood at only about 4.3%, and we expect future annual growth to come in slower as more new office space is completed. — RHB Research, Dec 19 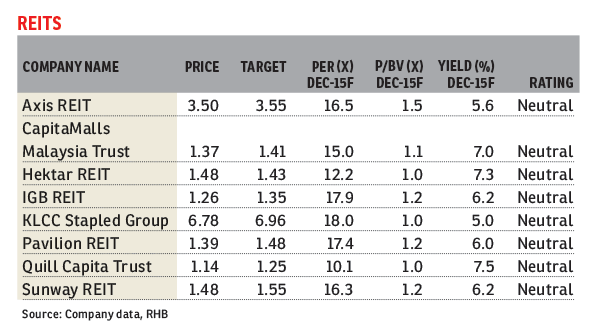