Cars: Lexus needs to keep up in the critical luxury SUV category 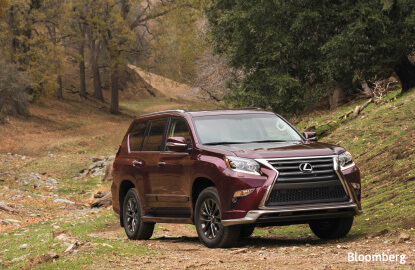 +A
This article first appeared in The Edge Financial Daily, on January 26, 2017.

LEXUS was arguably the first automaker to make the luxury sport utility vehicle (SUV) essential to suburban households. Its RX debuted in 1998 at US$43,120 — equivalent to about US$64,540 (RM285,912) today — and has sold more than 1.7 million units since then, the most of any luxury SUV in the US.

Since then, nearly every other luxury brand has introduced variations on the theme, giving us such things as the sporty BMW X6 and Range Rover Evoque, the gilded Bentley Bentayga, and the powerful Porsche Cayenne.

Luxury SUVs make up the most exciting, most profitable and strongest segment in the auto market today. Yet the 2017 Lexus GX 460 Luxury (US$63,380) cannot keep up.

I do not hate Lexus, even though I have criticised the brand a lot lately. In fact, it made a strong appearance at the recent Detroit Auto Show. But when you are test-driving 100 cars a year, the misses tend to distinguish themselves among the many standouts.

If you want the fastest, most powerful, most fuel efficient or most luxurious midsize SUV that costs less than US$70,000, look elsewhere. Try the Audi Q7, the Land Rover LR4, the Porsche Cayenne, the BMW X5 or the excellent Volvo XC90. Each costs less than or close to the Lexus GX 460 Luxury edition I drove around New York and through upstate New York. But they all have better efficiency, quality and handling than the GX.

It is not that the GX is a bad car. It is big and reliable, and not too ugly. It just feels irrelevant.

If you love the oversized oblong Lexus grille and want to hide among fellow suburbanites in a high-riding off-road-capable rig, the GX is perfect. It shares many of the same mechanicals and bodywork as the US$84,775 Toyota Land Cruiser Prado — and for much less money. The unfortunate styling at the front is GX-unique.

Its 4.6-litre V8 engine with 301 horsepower and 329 pound-feet of torque will not win the category, nor will its 7.8-second sprint time and 177kph top speed, but it is at least enough power to tow a 24ft boat or a four-horse trailer should you want it.

On the bright side, this car will perform well on a real adventure.

Behind the wheel, it feels as if you are sitting on a diving platform: GX is more than 6ft tall, 6ft wide and 16ft long, with enough ground clearance to make it over the odd boulder or ravine. Its full-time, four-wheel-drive system uses a locking limited-slip centre differential to prevent too much power from focusing on one wheel, thereby ensuring maximum traction. “Crawl control”, for when the car automatically regulates the accelerator and brakes on steep terrain (all you have to do is move the steering wheel), is optional. I did not drive this off-road, and I am guessing you will not, either. Still, it’s fair to note the opportunity. At 2,357kg, the GX weighs roughly 453kg more than a Ford F-150 Platinum pickup truck.

And the wheels do not match the brick-like heft of the car. Though passengers have to step onto slim foot rails in order to get inside, only 18-inch alloy rims are available. (Most SUVs these days offer wheels that are closer to 20 inches; those are not even optional on the GX.)

Driving the GX is a bit odd, too: Where most modern luxury SUVs on the market today use a unibody chassis, the GX uses an older so-called body-on-frame arrangement. This means that GX feels more like a truck to drive than a car. It is smooth and very quiet in a straight line, but it feels wobbly and abrupt when accelerated at higher speeds and when rounding corners.

Some pleasant upgrades are available in the interior of the car. If you spring the GX, I advise you to buy them, as I generally do in this column. Mark Levinson Surround Sound, a pre-collision system, dynamic cruise control, lane-departure alert and intelligent high-beam headlamps pushed the price of the GX I drove to US$68,295. They are worthy nods to luxury.

But they do not change the character of the beast, which needs some real evolution.

After a week of driving, I emerged with one firm conclusion: The comparatively dismal GX proved just how competitive the luxury SUV segment is today. If an automaker is not offering the latest technology and engineering with each iteration of a product, everything about it feels very left behind. — Bloomberg