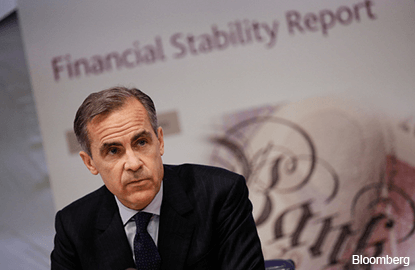 PITY Mark Carney at the Bank of England (BoE). There goes the Fed’s Janet Yellen, merrily raising interest rates for what feels like the first time since dinosaurs roamed the earth. Even Mario Draghi at the European Central Bank was allowed to tinker with his train set earlier this month, extending the tracks of quantitative easing by an extra six months.

Carney, though, is still stuck in neutral as the United Kingdom economy sends contradictory signals on whether monetary policy needs to be tighter. The Fed’s willingness to act even though inflation remains dormant makes the BoE chief seem like the “unreliable boyfriend” a member of parliament accused him of being.

The latest figures released last Thursday show retail sales surged by 1.7% in November from a month earlier, outpacing the 0.6% gain anticipated by economists. While those figures were boosted by Black Friday sales (a relatively new phenomenon in Britain), retail sales have increased on a rolling three-month basis for the longest period since records began in 1996, according to Bloomberg Intelligence analyst Niraj Shah.

Unemployment, meanwhile, has dropped to 5.2%, its lowest level since May 2008. That’s the kind of backdrop that makes policy makers nervous; if employers are chasing fewer available workers, wages typically rise and stoke faster inflation.

But last Wednesday’s wage figures suggest that’s not happening. Pay excluding bonuses rose by an annual 2% between August and October, at the slowest pace since February and undershooting economists’ forecasts for a gain of 2.3%. Between 2001 and 2008, pay increases at the averaged 4%; as recently as July they climbed by 2.7%.

On Dec 14, deputy BoE governor Nemat Shafik had this to say about her monetary policy intentions: I will wait until I am convinced that wage growth will be sustained at a level consistent with inflation returning to target before voting for an increase. In that sense, I will proceed with caution.

The Fed’s decision to raise interest rates last Wednesday seems to offer proof that borrowing costs need not stay at zero forever. Looking just at what the forecasts for growth and inflation show for the US and the UK in the coming quarters, you’d probably say their monetary policy needs are similar.

A fascinating Twitter tussle between economists Andrew Sentance and Danny Blanchflower, both former BoE policymakers, sums up the should-they-shouldn’t-they debate. Blanchflower, currently professor of Economics at Dartmouth College, highlights the lack of inflation and absence of a recovery in wages to pre-crisis levels as a reason to stay on hold.

Sentance, now the senior economic adviser at consultancy firm PricewaterhouseCoopers, argues it would be a mistake to wait for the threat of inflation to emerge.

Two respected economists looking at an identical data set, but reaching wildly different conclusions? Nothing to see here folks. Still, much like Schrodinger’s cat, it seems the UK economy is both dead and alive simultaneously.

For the time being at least, the most sensible option is for the BoE to remain at rest — and see whether the Fed’s rate rise turns out to be a prudent pre-emptive move against inflationary pressures, or a policy mistake that will need to be reversed in the coming months. — Bloomberg View